Home Featured Is it Ok for Committed Men to LIKE Other Women?
Featured
Rules of Engagement
January 14, 2013 WisdomIsMisery 92

Is it Ok for Committed Men to LIKE Other Women? 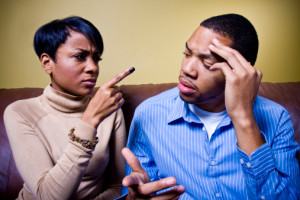 Last week, I wrote a post on 10 Tips Happily Married Men gave me on marriage. Of those 10 tips, only one received any significant amount of push back from mostly women readers. That was the following tip:

Accept that other women are still attractive. This theme came up a few times. You’re beautiful and he loves you, BUT there are other women in the world he might, from time to time, find attractive. A quote from one friend sums it up best, “space is #1, a good wife isn’t smothering, she’s confident enough to let her man hit the streets and follow Draya on Instagram.”

Let’s be clear, these men weren’t advocating for letting your husband blatantly disrespect you by actively pursuing other women on social media or beyond. Still, you should be confident and trustworthy enough to know that just because he “LIKES” a picture on Facebook/Instagram or RTs some cute woman on Twitter, doesn’t mean he’s secretly plotting to run off with that woman the second you turn your back.

A few women couldn’t co-sign the idea that their man would (or should be allowed to) find women attractive outside of the relationship. Some went as far as to suggest that it’s never ok for a committed man to find other women attractive. Keeping with the modern age, some women thought a committed man shouldn’t be on any social media websites – and if he is, he definitely shouldn’t follow any scantily clad women or hit the LIKE button on their respective photos. I found this interesting, so here we are today…

To be clear, I think any man that says he stops finding women beyond the limits of his own woman attractive when he is in a relationship is a liar. To me, that’s like saying when you own an umbrella, you become oblivious to when it rains. If such a man exist, I’ve never met him. Do I know faithful men? I do. Do I know any men that don’t find beautiful women attractive simply because they’re in a committed relationship? I do not.

See Also:  Amber Rose, Kim Kardashian and The Truth About Men And Groupies

Now to be fair, I think we must honestly assess the environment in which Internet photos exist. If Catfish and @BootyForensics – a Twitter handle dedicated to using “forensics” to decipher between authentic and altered photos – have taught us anything, it’s that objects on the Internet may appear larger than they are. They might also appear as highly misleading or outright fake. Many people, men and women, rely on altered photos to keep their supposedly real on-line accounts afloat. So, to the degree that women even want to compete with other women, to be forced by men – at least in their minds – to compete with women who are both physically and electronically altered is even more frustrating; even if more men than women give credit do realize that most of these photos are of physically and electronically altered women (not that we care). Even if the authenticity of the source is questionable, where does the line between casual observation and blatant disrespect of the relationship occur?

In my mind, Twitter, Instagram, Facebook and whatever other social media website your man frequents are merely modern age “men’s magazines.” Since men’s magazine’s have been around for decades, I’m not sure why the issue of men observing attractive women outside of their relationship is surprising to anyone, man or woman. I can only assume that all these recent debates are caused by the introduction of the LIKE button.

Back in the day, a man’s lustful ambitions of grandeur were generally contained to himself, social circle, local barber shop, or wherever groups of men gathered outside the earshot of their spouses. However, no thanks to the LIKE-button, now a man’s likes and preferences are suddenly available for all to observe and judge. It’s not the fact that today’s modern committed men like attractive women any more than their past counterparts, it’s the fact that their partner (and their partner’s friends) know the exact type and number of women these so-called committed men LIKE. As the saying goes, “the game done changed.”

A couple weeks ago, I witnessed an awkward conversation unfold on Twitter when someone pointed out that one man had a penchant for posting pictures of models that looked nothing like – and in many cases, the exact opposite of – his current girlfriend. Is it somehow more disrespectful for your man to gloat and share his superficial preferences with the world if those preferences don’t mirror or outright conflict with your own physical attributes? Is it somehow better if he fawns over women that have features similar to your own or it it always disrespectful for a man to knowingly LIKE a woman that is not you?

Since I’m not a particularly jealous person, I’m probably not the best source for on-line etiquette classes. I generally don’t care what the woman in my life is doing as long as whatever she is doing doesn’t involve doing other men, but I imagine there are men who are genuinely bothered by the idea of their significant other LIKE-ing photos of other men. In my mind, using a social media site how it’s designed (e.g. Instagram’s, a website I personally use, main purpose is to share and LIKE photos) isn’t some unspoken testament to how I do or do not feel towards the woman I have in my life or the woman I’m randomly viewing and LIKE-ing. I think people might be reading too much into the various LIKE buttons of life.

See Also:  What the Hell Is "Overweight" Anyway?

On the other hand, it’s not like you have to LIKE everything you come across, fellas. It’s ok to window shop from time-to-time. As one woman explained to me (paraphrasing):

Women know our men find other women attractive, so following a number of attractive women on-line is fine; it’s the equivalent of seeing hot women on the street. But, going out of your way to LIKE every scantily clad photo random women posts is like breaking your neck in front of your woman in real life. That’s where men, knowingly or unknowingly, cross the line of respect versus disrespectful.

A crazier, far simpler solution might simply be to ask your partner. If they voice displeasure with how you conduct yourself on-line, then it’s up to you to decide if you’re going to change. If you don’t, you shouldn’t be surprised if or when they are upset. Of course, communication is a two-way street. It’s equally unfair to sit around upset by your partner’s on-line activities if they are unaware their activities even bother you. There’s no reason to wait around for a wayward LIKE to reveal you dis-like your man’s (or woman’s) on-line habits. The LIKE-button is a very powerful tool and with great power comes great responsibility. If you doubt your man (or woman) has the willpower to resist hitting LIKE on everything they like, maybe you should learn from Chief Keef’s example and explain to him (or her) “that’s that sh*t I don’t LIKE.”

Or, you could always block them.

How do you expect your partner to change their interactions with men/women on-line when they commit to you? Is it disrespectful for a committed man/woman to LIKE photos of another woman/man or is it no big deal?

tags: Catfish Instagram Relationships social media
previous Confessions of a Cerebral Dater: Unspoken Expectations of Partners
next 9 Men to Watch Out For