Cliff Hanger: The Fiscal Cliff Debacle & Where We Must Go From Here 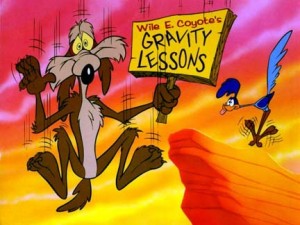 As a little boy, I loved to watch the Looney Tunes. One of my favorite segments was the Roadrunner and Wile E. Coyote. There was an episode I recall when Wile E. Coyote chased the roadrunner to the edge of a cliff. While the roadrunner halted before falling to his demise, Wile E. was not so fortunate. I attribute this to two things: a) sound judgment on the part of the roadrunner and b) poor planning on the part of the coyote. If we look at the current fiscal cliff debate in Washington D.C. we can learn a lot from what I call the, “Coyote Conundrum.” This means poor planning and decision-making on the part of our leaders in Congress and the White House (mostly Congress). The million dollar question is: what must those who hold fiduciary responsibility for this nation do to avoid further financial deterioration in the coming days, months, and years?

The Fiscal Cliff for Dummies

The media and government are good for trying to scare the populace. They come up with terms like “fiscal cliff,” a terror alert color system, and other one-liners to scare the living daylights out of the average American. This is exactly what they did with the whole fiscal cliff debacle. This, the fiscal cliff, was simply a deadline to take effect at midnight on January 1, 2013 (not to downplay the seriousness of the issue). Congress passed something called the BCA or Budget Control Act of 2011 and at the aforementioned time, this was to go into effect. This meant people would see increases in taxes (of about 2-3%), many entitlement programs would lose funding and the government wouldn’t be able to pay its bills (which makes me chuckle considering we barely pay them without a fiscal cliff). So January 1, 2013 came and passed, but there was NO deal by the deadline. I guess someone from Great Britain or Canada should be coming to eulogize America now, right?

See Also:  Black Friday: What Do The Pending Budget Cuts Mean for You?

Well, that would be the case if this were an Armageddon like the media and some members of Congress would have you believe. I would not want you all to believe that I am in any way bastardizing the seriousness of this financial mess. However, we all have to laugh uncontrollably at how silly our leaders in Washington and those who give us the “news” can be at times. 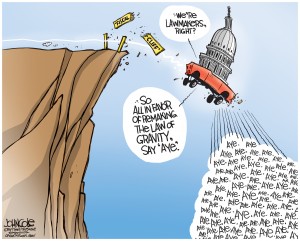 So the deadline of January 1, 2013 passed and Speaker John Boehner and President Obama still couldn’t agree on a compromise — mainly because Boehner’s mentally handicap step-children who wear the cap of Tea Party wouldn’t budge on anything. So after the negotiations faltered in the House of Representatives, the President set his eyes from whence he came: The United States Senate. The only problem is that he gave Senator Harry Reid (D-NV) too much influence. Reid became his typical partisan self and those talks faltered. Then in a swift act of valiant leadership, the President called in the bulldog, Joe Biden. The Vice President was able to work with Senator McConnell, the GOP minority leader, and hash out a “temporary” deal. It is not the deal that the White House wanted – and considering the mandate President Obama received in the 2012 election – it is not the deal that they should have to accept. For those of you who will argue that the GOP controls the House, let me inform you that even though Republicans have a seat majority, the Democrats still won the popular vote so that counts for something too.

See Also:  The Absence of Black People is not the Evidence of Racism

After Biden and McConnell hashed out the differences, we got an extension of the Bush-tax cuts (yes, they’re still around) for all Americans who make $400,00 or less (450,000 for couples), an extension of unemployment benefits, and a two-month delay to spending cuts for the Defense Department and a few other government agencies. BUT, there is more. This deal only lasts two months and then the debt ceiling limit will be reached again, which will make it improbable for the government to fund anything, which could bring about a government shutdown come March 27th; so the newly elected 113th Congress must act swiftly.

For far too long, our leaders in Washington have simply pushed aside or placed bandages on the financial problems. The Bush tax cuts, the two unfunded wars, and the increased spending of the Obama administration have led to the quagmire in which we now find ourselves. However, America is not an exceptional nation simply because we say we are; we are exceptional because we do exceptional things. It is time for our leaders to do the exceptional things that have allowed our nation to grow to the power that it is today. First, we need to come up with a sensible plan to pay down the national debt, which will only get worse if we continue to ignore it. Second, we need to balance the budget so that we aren’t spending more than we have and so that we can restore real fiscal responsibility. Third, we need to make some tough choices on both defense and entitlements. People from both parties will not like either choice, but if this nation is to get its purse clean, then some areas will have to become the sacrificial lamb for the time being.

No one said that doing these things would be easy, but they must be done. President Kennedy once said of the challenges and tough choices that faced our nation, “We do these things not because they are easy, but because they are hard.” American ingenuity, the ability to compromise for the collective good, must surely trump any partisan bickering and ambitious pandering. People are depending on these men and women to act in the best interest of a nation. Now the major question is if they will succeed? The answer: they have no choice, but they need to succeed not only for our generation but for our posterity as a country, as well. It is so necessary for our leaders to step up and do their jobs. Although I have limited confidence, even a mustard seed of faith can go a long way.