Home Empowerment Three Months After Sandy: A Father Struggles to Provide for his Daughters
Empowerment
Other Stuff We Like
Politics
January 31, 2013 _AndreDFields 5

Three Months After Sandy: A Father Struggles to Provide for his Daughters 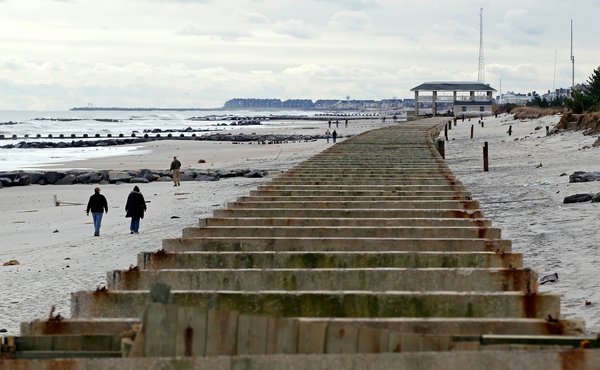 I have been working on special assignment with a program that is charged with making sure that survivors of Hurricane Sandy get the resources  they need to rebuild and restore the lives they once enjoyed. When I was assigned to start this project back in mid-December, I came into it with a great sense of hope. However, over time I have come to realize that this overly idealistic approach was not going to work in my new found role. Days went by and as I got settled in, I started to feel a sense of greater service. I wasn’t affected by the Hurricane but there has always been this deeper sense of collective responsibility I feel we all bear not only in times of despair and destruction but also in times of peace and prosperity. The responsibility to constantly uplift each other. I had to personalize everything! Just imagine going to work everyday and thinking what if this happened to me or someone who I truly care about. It took this for me, coupled with my deeper sense of benevolence to truly grasp the magnitude of what was going on as I attempted to help the families who needed it the most.

After almost three months, President Obama finally signed H.R. 152 into law on Tuesday. This bill is intended to provide aid to those families who have been affected by Hurricane Sandy. After dealing with a pusillanimous Congress who at first killed a bill that would have provided aid and then tried to derail this final legislation; it feels good to finally let out a sigh of relief, right? I wouldn’t be so sure; while most people believe that by passing this legislation all the pain and suffering will somehow disappear, I couldn’t help but think to myself that they could not be any more naive at the fact of the matter. Maybe it could be the idealism that I typically share, but my experiences have forced me to be increasingly irate in a sense with regards to our government and the mindset most people who are involved with these relief efforts.

Most will have everyone believe that NYC and the Jersey Shore were the only areas hit really bad. The fact of the matter is that my home of Long Island was devastated and destroyed in a lot of areas. I came to see this first hand as I toured places such as Long Beach, Point Lookout, Oceanside, Island Trees, Merrick, Bellmore, Freeport and the Baldwin Harbor. Through my interactions over the weeks, I have come to see firsthand frustrations with the government, the response and the runaround that bureaucracies create.

Disconcerting is an understatement when sitting with people like Michael, a 36 year old father of two small girls from Oceanside who lost everything in the storm and had been stiffed by the red tape of Mineola, Albany and Washington, DC. We could all shout “this isn’t fair,” to which “life isn’t fair would follow.” However, Michael doesn’t want a handout. He’s not trying to swindle the system. He like many others are people who have made a life for themselves by working hard and playing their part in our communities. How can one justify their leaders carping and moaning over fiscal responsibility and playing politics with the well-beings of these decent hard working Americans?

It almost brought me to tears when I thought how people like Michael are still displaced across Long Island and even many parts of NYC. While not comparing the two tragedies, it brought back those perturbing images of Katrina. How can people still be displaced in a country as great and rich as ours? As I walked through a disaster relief center earlier this week, I could only ask myself, “Is this an undeveloped area of the world or is this the great United States of America?” As I interacted with the people, I felt a deep burning desire within to do more, and to help more. I wanted to say something that would ease the tensions, the anxiety and the frustration that most of these people had been feeling. I then begin to ask myself why would God afflict these familes as so? And later, I asked the same question to a friend who responded:

“ sometimes [God] does things that we’ll never understand. But it is my belief that sometimes it takes extreme events like this to get people’s attention [back] on him. It [may not] even be necessary for the people in it but the people around [the devastation] to see as well.”

Could God be trying to tell us something? I know that he doesn’t purposefully afflict us, but maybe my friend could have been valid in his assessment. My only hope is that with this new legislation and funding, the people who really need it will get their hands on it. Monies don’t need to be allocated to programs that are going to be wasteful but to programs that are going to serve with extreme vigor in efforts to help restore our state and the lives of its people. For myself, now is the time where I take it to the next level in being of service to these people and making sure they get exactly what they need. Of course there may have been more qualified individuals who could have been placed in this spot, but I honestly feel as if though God put me in this position to make a real difference. Helping families like Michael’s across Long Island and other parts of NYC is the task at hand and my challenge.

tags: andre fields community service hurricane sandy
previous Five Reasons Why The 49ers Will Win Super Bowl XLVII via @SevenEighteen_
next Is VW's Superbowl Commercial Racist or Not? [See For Yourself]