Home Hot Topics Do You Keep Track of Everyone You’ve Slept With?
Hot Topics
Other Stuff We Like
Sex
February 1, 2013 Dr. J 25

Do You Keep Track of Everyone You’ve Slept With? 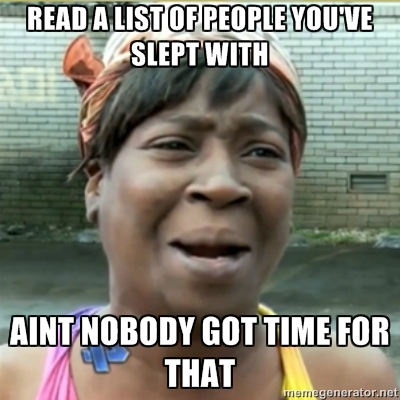 Preface: You will never ever get a straight answer out of me on how many people I’ve slept with.

I was going around the Internet the other day and I came across an article that talked about the different ways people keep track of who they’ve slept with in their past. It took me back to college when we sat around, as frat brothers typically do, discussing how many women we slept with. I’ve been pretty clear to all of those in my network that I don’t count, and therefore, don’t care. After a few brews, a feeling of fraternalism and a challenge, I decided to try naming all the women I’d been with in my life. 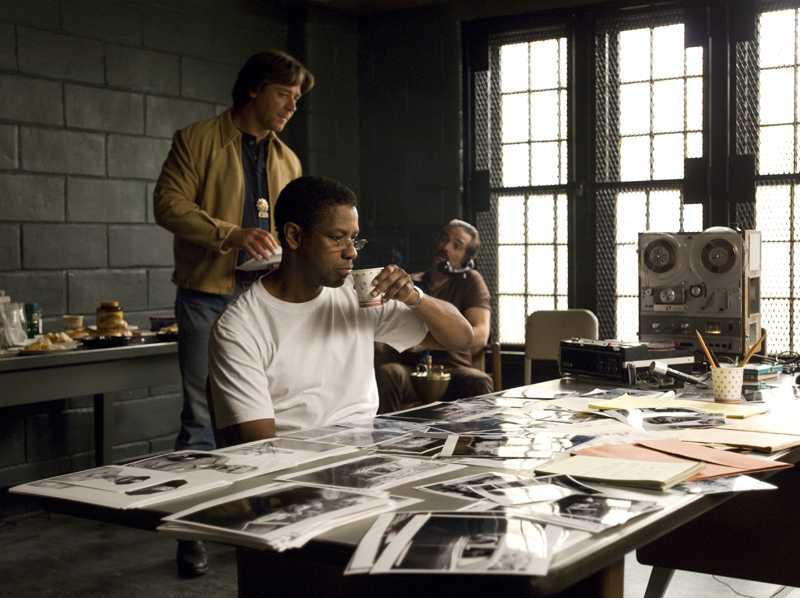 About [blank] [blank] later, I came up with a number I was confident with.

That’s when my frat brother said, “What about [blank]?”

I had totally forgot about that girl. Not to say it wasn’t memorable or special, I had simply just forgotten to include her in the list. Boys will be boys and so we laughed, and then we drank… and then we laughed some more. We all shared stories and decided that we would settle on ranges or landmarks along the road, but we’d never put too much effort in keeping track of everyone. Later, it started to bother me that I had forgotten that I had sex with that girl. It wasn’t like I was a manwhore in college. It was a simple oversight, but since it did bother me, I started thinking about what this was really telling me about my sex life.

Back in high school, one of my boys used to keep the first condom wrapper from every girl he took down. I knew something was up one time when we were all chilling and that dude had a shoebox full of wrappers. Either he was on fire and it wasn’t for Jesus, or he was lying on his Johnson. A few cats would keep names in a black book next to the bed or in a box of Js so they could readily take a look at their trophies should they ever feel the need. Once college came around, if your number wasn’t in the range that the fellas thought it should be, we all set out on a plan to get your numbers to a respectable amount. Many men took Ls so that one dude could live.

See Also:  The Thing About Break Up Sex

Somewhere along the way it went from being about just the act of having sex, to who you had sex with, to how many you had sex with. However, soon that would pass. We all moved on to something bigger and better than a numbers discussion – The Story. After all, quality wins over quantity any day. But, since the story became more important than the numbers, I stopped keeping track of who I slept with once again. (Lucky for me, I have been in relationships ever since that moment. Thank y’all for coming that will end the press conference.)

As young boys we were wild, straight up wild.

Awhile later in my travels, a coed group of us gathered at a brunch spot in NYC. It was always weird being in the city because we’d meet for brunch but we’d all be coming from different places in the morning — each of us hoping that there was some story behind every person’s hangover. I remember one time my friend (a she) told us a story. In summary, this is what she said:

I was wasted last night, I probably still am wasted right now. CAN I GET SOME WATER?! I woke up this morning in a hotel room, by myself, with no clothes on, wondering, “Did I have sex last night?!” I know who I left with last night, I remember going to said hotel, but the rest of the details are fuzzy.

Well… well… well, what do we have here? Is it possible that the same or similar phenomenon plagues women too? Most women, (actually it ain’t even most anymore), like to profess that their number is low enough to count on one hand, max two. However, I’m thinking to myself; my friend is not loose. She’s a well respecting, taxpaying citizen with no record. If it’s possible she lost track, where does the rabbit hole end?

The next thing that came to mind is that while most men think about the number of women they’ve had sex with like this:

Most women think of the men they’ve had sex with like this:

That’s when it occurred to me to answer a more important question, “Why does it even matter if you’ve been keeping track of all the people you’ve slept with?”

If you want, I can give you three really good reasons why you should keep track of who you’ve slept with:

See Also:  How To Tell If A Man Is Bad In Bed Using Social Media

Here’s what you should do today before you leave work or begin your weekend. Take out a sheet of paper and start with your first. (Pray to God, you remember your first’s name.) It doesn’t have to be in chronological order, but try and list all the people you’ve had sex with over the years. After you finish your list answer these three questions:

What do you guys think? Is it important to keep track of the people you’ve slept with over the years? Do you think it comes a point in time when you have to start keeping a list or do you just give up after a while? Would it make you skeptical of a person if they told you that they didn’t keep track of how many people they’ve slept with and would you continue to date them?

tags: keeping a list numbers game sex
previous Is VW's Superbowl Commercial Racist or Not? [See For Yourself]
next SBM Is Taking on the Black History Month Challenge on Facebook!