Home Culture Where Do The Young Professional and Hipster Meet?
Culture
Men
Other Stuff We Like
February 15, 2013 Dr. J 13

Where Do The Young Professional and Hipster Meet? 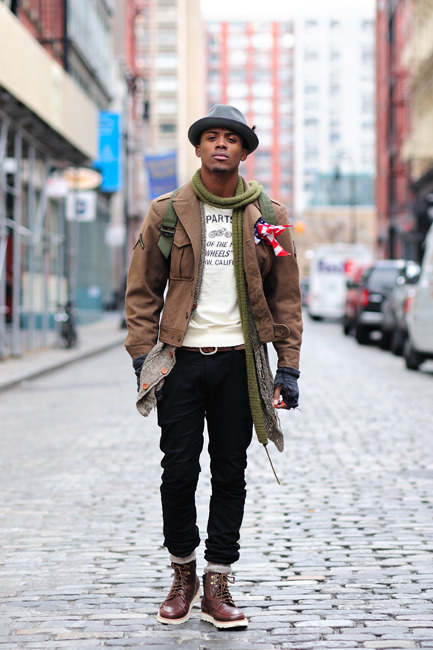 If you were to walk into my closet, you could find just about everything you need to know about the complexity of the person that is me. On the left side of my closet are suits, sports coats, slacks, white/blue dress shirts, and atop the hangar rack are folded polos and v-neck sweaters in just about every color. I only wear two types of suits, Jos A. Banks and Emanuel Ungaro. I very rarely wear any other color shirt to work outside of white or blue; those are also either Stafford or Calvin Klein shirts. The point is that half my closet is what you would expect from any young professional rushing up the corporate ladder.

Then there’s the right side of my closet, bright-colored hoodies, multi-colored button-ups, plaid shirts; and atop the rack are folded sweats, jeans (slim fit or skinny) and colored pants. That’s who I am when I am not at work. And while most people tend to try and find careers in which they can be themselves at all times because they think that it ensures success, I’m made aware that I’m very much not like the person I tend to be Monday-Friday, from 8AM – 8PM. There’s this guy who loves speakeasies, an old pair of faded gray skinnies and his pair of Chucks and then there’s this guy in a $900 suit, face inches away from his laptop, and whose iPhone is growing out the side of his hand. Most people who interact with me are left wondering where the two people meet and if they do meet, what do they talk about?

Last Sunday, Girls aired its fifth episode of the season and you know a lot of people think that may have been the worst episode ever on the show. I thought it was actually the best episode to date. It actually touched on a point that I try to tell people all the time about myself. Just because I aspire for traditional corporate success, doesn’t make me any less down to earth or “hipster.”

DC is one of the most interesting cities in America right now because it’s not much different from what’s happened to Brooklyn, NY over the last several years. Our hipster community is filled with young people standing in line at local thrift shops for vintage tees who actually are earning six figures at some law firm on K Street.

However, people seem to think that a hipster who is less than a decade away from partner at a law firm couldn’t possibly be genuine. I beg to differ.

What really struck me about last week’s episode was the realization Hannah had that just because you profess to live an alternative lifestyle that it means that you’ve relegated yourself to a life of appreciating being a have-not. That’s not the case at all. There’s nothing wrong with happiness, whether alternative or traditional. There’s nothing wrong with wanting success, virtue, and wealth. Nothing at all. Just because I’m not a twenty-something guy, scraping together pennies to afford a sixer of PBR and still pay my overpriced studio’s rent, doesn’t make me any less hipster or genuine.

I think that if there’s anything that people should take away from this generation, it’s that we are all incredibly multi-faceted. We’re not going to be forced into the same silos for greatness that our parents and grandparents were forced into. That doesn’t mean that we will stop encouraging our children to be doctors, lawyers or scientists; it just means that we won’t be too concerned if they’d rather not eat meat and choose to skateboard to school instead of busing. It’s because we think the two can go together.

I told myself I was not going to make this about race and it isn’t, but I know that the majority of the people reading this right now are Black (whether that means African-American, Black Latino or Mexican, or whatever remains to be seen, lol). This is a concept that does not escape or appear foreign to the colored section. It’s been a long time in America that we’ve had to cloak ourselves in society in order to earn a living and gain wealth. We’ve had a long history of projecting an image to society that isn’t consistent with the things that went on in our households. While that has its advantages and disadvantages,it’s the truth.

As I finish writing this piece, I look to my bookshelf and am reminded that it’s time for me to read Invisible Man again. Each year, I read a certain book with each season, Invisible Man* is typically the book that read when I’m reminded that I need to put my head down and push towards year-end. In a weird and tricky way it’s funny how that story applies to me. Professionally, I use it to exemplify how I am cloaked and moving through corporate America seemingly at the same pace as my peers but they’ve allowed me to often times slip into positions not typically saved for Black people by overlooking me. Socially, I use it to exemplify how many of my friends view me as a conscious (yet conservative) young brother in DC but they know nothing about my professional success and accomplishments.

See Also:  How to Meet Women While Avoiding Girls and the Friend Zone

Yet despite the difference in focal points of how others may view me, it doesn’t make either more or less genuine. I’m happy socially and professionally right now. It’s taken me a long time to be able to accept that. I’ve accepted and embraced the difference as being normal. Traditional success, alternative lifestyle… boss.

tags: black hipster brooklyn dc girls nyc
previous 16 Couples We All Know and Hate
next Mean Girls: The Many Factions of Black Twitter