Home Featured Co-parenting: When One Of The Parents is Gay
Featured
Men
March 6, 2013 DarrkGable 118

Co-parenting: When One Of The Parents is Gay

*Before anybody gets all politically correct, and says I’m intolerant, some things need to be understood.  I believe in God, Jesus, and the Holy Spirit.  These beliefs are the foundation of how I view the world.  As such, I’ll be the first to say that yes, God is Love.  At the same time, God also has precepts and rules.  I choose to abide by them.* 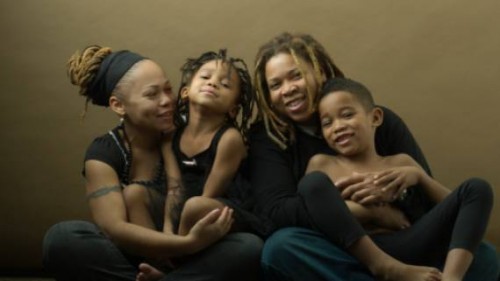 “When kids are involved, a person’s thought processes change.”

I had somebody tell me this in reference to the curve ball that life recently threw me.  What curve ball?  Well, I’m raising a little girl whose mother is gay.  This may not be a “blow your socks off” situation for some.  For me, however, it is.  Like a batter taking a swing at  the best curve ball, the situation started at one position, the bottom fell out and  I went down looking.  That’s how fast it crept up on me.

When I first met my oldest child’s mother, she was, in fact, gay.  We lost contact for awhile, but when we ran back into each other some years later, she was all about the church.  I had been dealing with some issues before we reconnected, so as the saying goes, I was “getting right with God” myself.  It seemed like a good time to get reacquainted with an old friend.  We started spending time together, going to church together, and even going on  dates.  We weren’t “exclusive”, but we weren’t seeing other people either.

About a year went by before she informed me that she wanted some definition of what we were doing.  So, like any reasonable man, I figured I’d define what our “chilling” meant.  From that day on, she was my girl.  Up until that point, there was no sexual contact between us.  This isn’t to say that the desire wasn’t there, but we figured it was best to get to know each other…biblically.

Well, the no sex lasted about another month or so before temptation and physical urges won out.  A couple months later, we found out she was pregnant, and that was the beginning of the end of the relationship.  During the split, my daughter was born, I got married and my daughter’s mother found a new man.  They were together for a while, then split up.  At times, things between her and I were (and still are)  tense. Other times, we’re cordial; as is the typical ebb and flow of a co-parenting relationship like we find ourselves.

But, then it happened…

I am not exactly sure when, but one day I noticed she was spending time with different women.  At first, I didn’t give it much thought.  Then my daughter told me that one of the women had moved in and was “mommy’s girlfriend”; like girlfriend, girlfriend.  I was taken aback.

This is also where my social sensibilities met with the quote from above.  People tend to have clean cut ideas about most topics, but for whatever reason, the thoughts on homosexuality are always in flux.  Society will let most issues slide as long as they don’t affect individuals on a personal level.  Bring children and kids into a situation and people’s thoughts change.  This is one reason why I found myself conflicted.

See Also:  Marriage For All

I’m generally a live and let live person.  What a person does with their life is between them and God.  I have my own issues to deal with, so I can’t spend time wondering about another’s household;  EXCEPT…my daughter was in this particular household.

I wonder how seeing her mother in a non-traditional relationship will affect her.  Not just now but in the future.  She’s seeing two different family dynamics, and it weighs on my heart.  Because she’s my daughter, and because of what I believe, her spirit is my responsibility.  I’m honestly not all that concerned with the studies that say it’s no different growing up with same sex parents. Nor am I concerned with other studies that suggest there is evidence that growing up in a same sex home is, in fact, harmful. I’m only concerned about my daughter’s well being.

The fact that her mother is the custodial parent means that she’s exposed and influenced by what she sees the most.  As a man who believes in the Bible, it’s hard.  It’s hard knowing what kind of influence I, as her father can have, yet not being able to guide her and help her understand what she sees on a daily basis.  In my heart, I feel how her mother is living is harmful to my child.  It’s just how I feel.  Is this based on my own judgments or what’s best for my daughter?  I can’t necessarily separate the two.  But, I still won’t make disparaging comments or remarks about her mother.  However, when my daughter told me that she got in trouble at school for kissing and feeling on another little girl?  I had a serious problem.

See Also:  Wait: Was that Racist?

When her mother and I discussed the school incident, it was shrugged off as something she (my daughter) lied about.  This didn’t sit well with me for a myriad of reasons.  Mostly because in my thinking, this is a serious issue that needed to be addressed by both her parents.  Yet since my access to her is limited by time, distance, and the whims of her mother, the lasting effectiveness of my words are debatable.

As my daughter gets older, and understands more about life, these formative years will be crucial.  I don’t want her feeling like her mother is “weird” because of how she lives her life.  Nor do I want her feeling like I’m some Bible thumping, holy roller.  At the same time, I’m going to teach her what the Bible says about raising children.  After this, the greatest thing I can do for her is be her daddy, love her, provide for her, and support her.

Prayerfully, that will be enough.

tags: co-parenting homosexual lesbian parenting Relationships
previous Why Does He Ask "Do You Love Me?"
next Relationships and White Lies: Brooklyn Man Fakes Kidnapping To Avoid Girlfriend