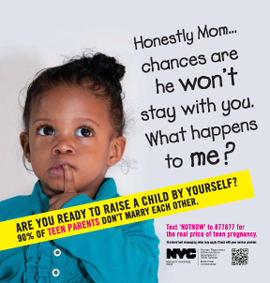 I always have mixed feelings about teen pregnancies. I’m not going to throw my foot all the way to the back of my mouth but I will speak on a few things as carefully as I can with respect to how I feel about the topic.

I believe that children should be given the best opportunity to succeed. That’s two fold; children should be able to live their lives free of adult responsibilities far too early and children should born into solid situations. I can’t say whether being born into a two-parent home is better than a single-parent home. Trust, I know some screwed up people that are that way because they grew up watching a dysfunctional relationship that should have never been.

I also believe that we are too nice to teens as it comes to pregnancy. In the Black community there’s this phenomenon of “[such and such] did it and they turned out fine, so I’ll be fine too.” It’s crippling at times because it allows people to make decisions based on the success of another person that isn’t guaranteed to them too. But like where are the people who will tell a teen, “Look teen pregnancy is NOT the move.” It seems like the youth have this image of, “16 and Pregnant” and don’t realize that’s really not what happens in real life. Anyway, I’m going to move on… I’ve provided enough to start a conversation with just those brief thoughts.

See Also:  Why Am I Suddenly So Hot?

Anyway, New York City has a plan to attack Teen Pregnancy. They feel that by releasing controversial advertisements, it will deter teens from becoming pregnant. Of course, people are in a tissy about it. Now I can’t lie, most guys looked at these posters and straight up started chuckling. Keep it real, nothing they’re saying here is false, it’s just harsh. I figured I’d share them with you guys today and ask for your thoughts on the ads. 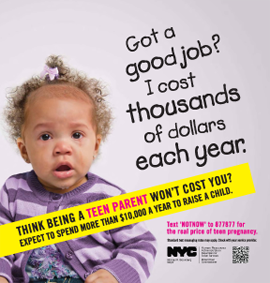 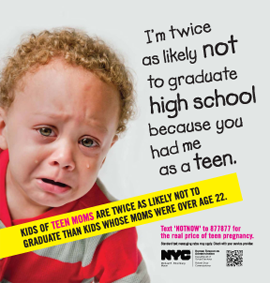 What do you guys think of the ads? Offensive or spot on? The larger question is, what can we do to prevent teen pregnancies? Provided that nobody here is one of those Mormons who lives on a farm and thinks women should be having babies at age 13.