Home Culture The First Time I Worshipped at a White Church
Culture
Other Stuff We Like
March 7, 2013 Tunde 30

The First Time I Worshipped at a White Church 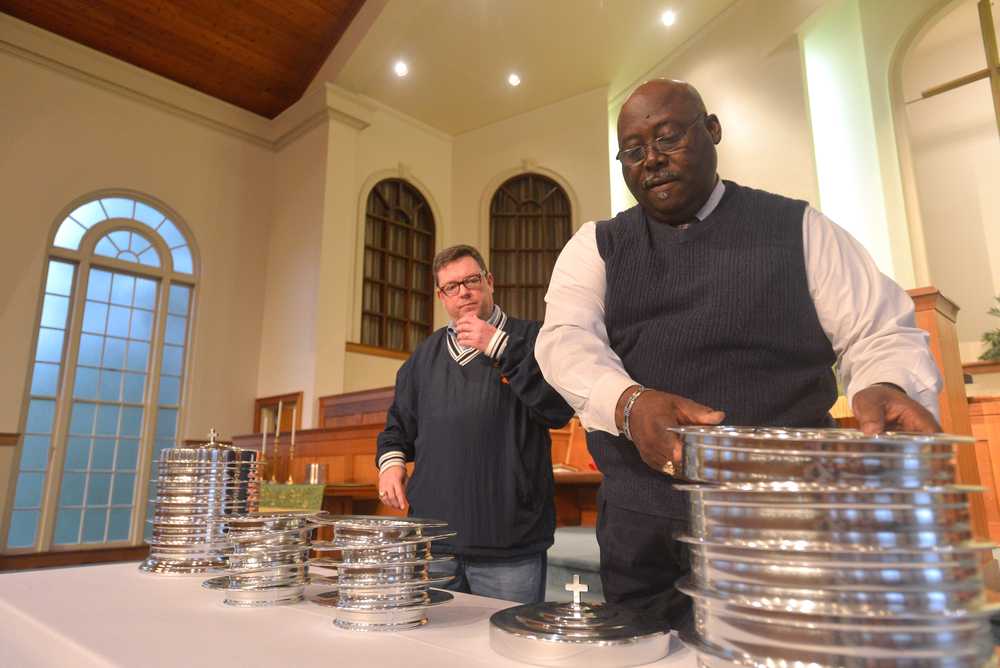 Notice I didn’t describe myself as religious.

I believe in God, Jesus Christ and the Holy Ghost.

I even have my favorite verse tattooed on my back (2 Timothy 2:3) in the shape of a cross.

Since I moved away from Nashville in the summer of 2011, I’ve either been catching streaming service of Mt. Zion or church-hopping in New York because I just haven’t found a church that I can call home. Two weekends ago while I was in Portland, I was invited to service before I left town that night. I readily accepted because I’m always curious to see what different churches have to offer.

I’d be lying if I said that I’ve been to a majority Caucasian church service before. Mt. Zion is a Baptist church in name but it has a nondenominational feel. There are people of all races who are members, but the congregation is approximately 80-90% African American. The church I’ve attended the most times while living in New York (Brooklyn Tabernacle) has a mixture of ethnicities. That said, I was shocked when we pulled up to the church and I didn’t see one face of color. This would be my first time attending a White church.

I was skeptical at first, but I kept my reservations to myself for fear of not seeming open to stepping outside of my comfort zone. What would the pastor talk about? What was his preaching style? Was he like Joel Osteen? What would praise be like? Would the songs sound the same? These were all questions racing through my mind as we made our way to the sanctuary.

See Also:  Wait, Why Does Teddy Bridgewater Suck All of a Sudden?

Not only was the church majority White, but from what I could see, we were the only Black people in the entire church. My uncertainties were quickly laid to rest when service began. I felt right at home and as the portion of service came where you greet fellow worshipers, it reminded of Mt. Zion.

For some people, their favorite part of service may be praise. For some, it may be fellowship. My favorite part has always been the Word. I enjoy when gospel finds relevance to a particular situation that I may be going through. I appreciate when that gospel is encased within allegory and parables.

This particular Sunday morning, the focus was on Forgotten Virtues: Loyalty. I took great notes and anticipated reading up on the scripture on loyalty with friends, in church, and to your spouse. I was so engrossed in the Word that I didn’t realize that service was almost over.

I thought to myself that this experience wasn’t half bad. I actually enjoyed myself.

Then the hammer dropped.

Before we left, we took communion and offering. While offering was being collected, a video was played on the jumbo screen. The church supports a number of missionaries. This particular couple was interracial. A White woman and a Congolese man with a beautiful baby girl. They were and I quote:

“Going to ‘Africa’ to help the Muslims find the light of Christianity.”

See Also:  Where Do Black Men and Spirituality Meet?

From there, the couple went on to describe how the people in “Africa” needed their help. Honestly, I was surprised that the wife didn’t use the words “barbarian” and “uncivilized” as descriptors.

Judging from the interaction of the couple on the video, I thought that the wife had a bit of a savior’s complex. Her husband’s accent was very thick and it seemed as if she might have found him and introduced Christianity to his life. She “saved” him from eternal damnation and now they were going to save other souls.

Notice I didn’t describe myself as religious.

Although I would classify myself as Baptist (closest thing in America to the C&S Nigerian church I grew up in), I’m tolerant of other religions. I own three bibles, but I also own a Qur’an. I’m fascinated by other religions, but not in a way that makes me question my own faith; so it’s unnerving when I come across other Christians who feel that everyone on the face of this planet has to follow their religion.

I was bothered by the video but it wasn’t like I could just get up and walk out of the sanctuary. One, I didn’t drive. Two, that would have been rude and I was raised better than that.

The video perturbed me because the woman kept saying, “If you want to come help Africans then anyone is more than welcome.”

One of my pet peeves is when someone describes Africa as if it’s a country. Africa is an enormous continent with countries of different people with distinctive dialects, skin tones, cultural nuisances and histories. Grouping everyone together is lazy, ignorant, and disrespectful.

See Also:  The Art and Science of Mixing and Matching Your Suit Style

The video also reminded me of imperialism. When Europeans landed in Africa, they employed the age-old tactic of using The Bible as a stepping-stone into enlightening the “savages”  in order to exploit the wealth of natural resources. It was only for their good. Left to their own devices, these savages wouldn’t survive. Never mind that people had been living on the African continent just fine before Europeans came.

The White man that landed here, he came with two great weapons. One is the Bible and the other was the gun. If he didn’t humble you with the Bible, he’d crumble you with the gun. And, he’s still praising the Lord and passing ammunition all over the world. — Lewis H. Michaux

I walked into that church feeling apprehensive. That apprehension quickly turned into relief and joy. Those euphoric feelings hurriedly back flipped into repulsion and abhorrence. As I exited the sanctuary, all I could do was lower my head and shake it in disgust.

Have you ever attended church service that was outside the realm of what you were comfortable with? How was that experience? How do you feel about people pushing their religion upon others? Have you ever had someone thrust their beliefs on you?