How Can Women Escape the Friend Zone?

A SBM reader asks the following (submit your own questions here):

I’ve been friends with this man for 1 year and we have a friends with benefits relationship. We only saw each other like once a month in the beginning, but lately in the past 3 months we’ve been seeing each other every week and we’ve been going out to eat and shopping which we never did. He even wanted to work out with me a couple weeks ago. I want to become something more but I don’t know how to go about it. How do I get out of the fwb zone? 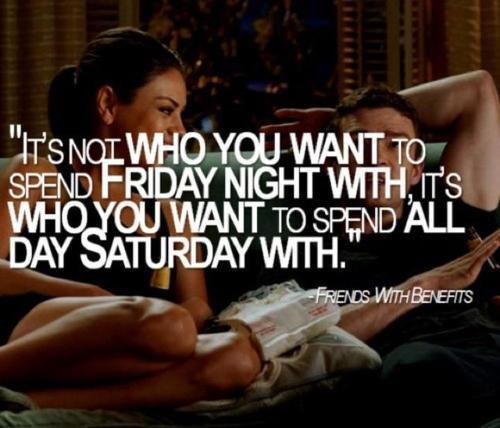 As I wrote about here, I’ve expressed my doubts about the existence of the woman’s “friend zone,” but many women, including today’s contributor, continues to swear that women can also become trapped in the dreaded friend zone or the better, yet still long-term dissatisfying, friends with benefits zone. So, how does a woman get out of the friends (with benefits) zone?

Well, in the wise, elicit words of street poet Two Chainz, “You Got A F***king Problem.”

With men, the friends with benefits zone is one of those places that is easily entered, yet almost impossible to escape. The Friends With Benefits zone is like The Hotel California. You can check out whenever you want, but you can never leave. It’s a paradox like that. Now that we’ve gotten that out of the way. Everything that’s improbable isn’t impossible. You do have a few options.

1. You can tell him how you feel. You can be a grown up and simply tell this man that you want something more than he’s currently offering. I have to tell you, if I’m reading your email right – and I’m not sure I am – but it seems to indicate that you’ve had a FWB relationship for 12 months, of which, you saw each other about once a month, until recently. I’m taking a leap here, and I’m going to assume you had relations the majority of the time you saw each other during that time frame. Well, to be honest, men hate change and they like consistency. This is why men like the FWB arrangement. For them, it’s all benefits all the time. There’s really no risk in telling him how you feel other than: 1) the off chance that you might bruise your ego if he doesn’t feel the same way; and 2) things, for awhile, might get awkward because now he knows you like him as more than a FWB and he might/does not feel the same way about you.

2. Cut off the benefits portion of the friendship. I’m not a fan of this approach, but that’s because I’m a man and I admittedly recognize my own bias on the subject. You were unclear in your letter what, if anything, you wanted to change if your BFFWB didn’t want to become your BF. However, if you don’t cut-off the benefits portion of the friendship, the man really has nothing relative to lose or gain. In fact, depending on his viewpoint, he might have more to lose than gain. For example, most men avoid the official relationship title because they know it entails more responsibility. If I may be frank, if he wanted more from you – relationship or other – he likely would have brought it up himself, especially after one year. I must reiterate that just because something is improbable doesn’t make it impossible. It’s possible that he was simply bidding his time, because he’s already getting all he needs from the relationship and he’s willing to give (or take) more if the opportunity presents itself, but you have to take into account that by you bringing it up to him, you are calling his hand and he might fold rather than show you his cards.

See Also:  Dating in the Digital Age: A Panel Discussion and Social Mixer in DC w/ Dr. J as panelist

3. Tell him how you feel, then cut off the benefits portion of the friendship after a definitive passage of time. This is a combination of 1 & 2. Basically, you tell him how you feel and you let him know that you don’t want to continue along the route of FWB for infinity plus one. Instead of immediately forcing him to choose – although, let’s keep in mind that it’s already been 12 months so he should know what the hell he does or does not want from you by now and his actions seem to indicate that he doesn’t want more or he would have asked for more beforehand, but whatever – you give him a time frame – DETERMINED BY YOU, NOT HIM and I personally think it should be between 1 to 90 days given the fact that he’s already known you for 12 months – to decide if wants more, less, or the same from you.

Those are my thoughts on the subject, but the benefit of writing into SBM is that we can solicit the opinions of our reader base as well. So, SBM family, let’s turn to our neighbor and say, “neighbor…TURN UP!” Then, answer the following questions for our reader: Fellas, how does a woman get out of the friends (with benefits) zone? Ladies, have you ever successfully escaped the friend zone or friends with benefits zone; if yes, what tips would you recommend our reader implement?

See Also:  Bedroom Beef: Who Should Initiate "The Love?"

tags: Dating escape Friend Zone Rules of Engagement Women
previous The Curious Case Of The Disappearing Love Interest
next My Boyfriend Hates My Best Friend ... Why?