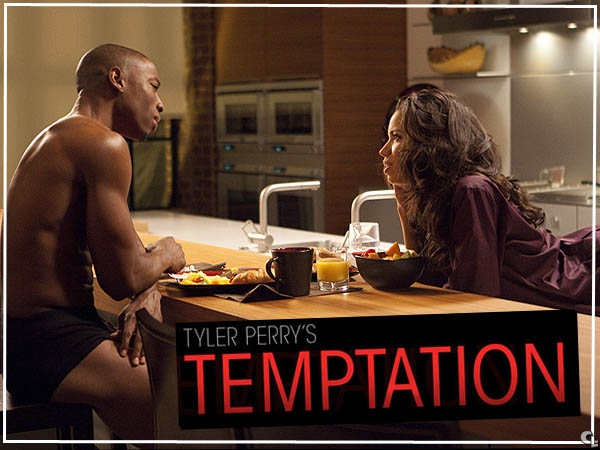 I absolutely loathe Tyler Perry movies. I think they’re horrible, poorly plotted and executed movies – like each and every one of them is just bad. If there was a way to give half stars, every Tyler Perry movie I’ve ever seen would get no stars. Despite the fact that I don’t like his movies, it doesn’t take away that he’s the highest grossing filmmaker in Hollywood right now and laughing all the way to the bank. I can’t take that away from him.

“Tyler Perry’s Temptation” is an awful, awful film and while it is easy to mock and dismiss, it is also kind of a shame to behold.” – Peter Sobczynski (This was taken from RogerEbert.com, RIP to a great one.)

I went to see Temptation, and it wasn’t because I wanted to see the new Tyler Perry movie, or knew many of you would be going to see it, or thought that maybe Tyler had finally found his way out of buffoonery into legitimacy. None of that had anything to do with it. I went to see the movie because Jurnee Smollett was in the movie. I have been following that woman since she was on Full House! I feel like we grew up together and if you follow me on Twitter, you would have seen when I posted a picture of her Wikipedia page showing that we share the same birthday. That’s literally the only reason why I went to see the movie. I didn’t tell anyone I was going, didn’t ask anyone to go with me, I just gathered myself… picked out one of my free movie passes and walked over to the theater. 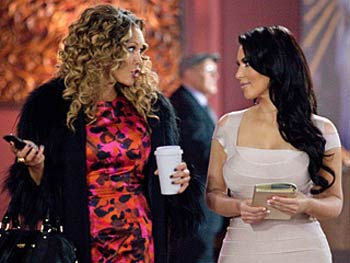 I should add here that I knew Kim Kardashian and Vanessa Williams (Let’s go Cuse!) were in the movie and I didn’t care all that much. I already knew Vanessa would have some cheesy accent in the movie. As for Kim, I like Kim where she is right now… I found her character quite hilarious. She tried so hard to be serious, probably because on her TV show she tries to appear to be aloof and flighty. She came across much like a grade school teacher who tries to be a disciplinarian with students. Those teachers tried to seem mean, but we knew they were saps because they taught children for a living.

Synopsis: An ambitious married woman’s temptation by a handsome billionaire leads to betrayal, recklessness, and forever alters the course of her life. (It’s also set in Washington, DC.)

A few things stood out to me about this movie:

1. Tyler has issues with women.

I’m so sick and tired of each one of these movies Tyler makes featuring some woman who is lost in the world until some God fearing, blue collar Black man can be her savior. It’s getting old at this point. The women are always put in positions of weakness with the only logical solution being for them to need the assistance of a man to find answers.

2. Tyler needs a lesson about rape.

It’s funny how we just had a five week long conversation about “rape culture” and then Tyler makes a movie where a woman is clearly raped and no one says anything about it. It was a very key part of the movie and Tyler just skipped right on over it and so did we. It’s obvious that the only people held accountable for promoting “rape culture” are people in Hip Hop and/or politics.

I didn’t really realize this until a little later, but why did the woman in the end seem like she was doomed to a life of solitude and misery because she was HIV positive? Tyler’s got to do better than that. In fact, he’s got to know better than that. That’s not cool in 2013, it’s actually never been cool, but seriously wtf?

4. Tyler has issues with people who aren’t Christians or Christians who make mistakes.

Then there’s always that leitmotif in all of Tyler’s movies that if you don’t do exactly as “the Church” says, you’ll end up having a horrible life. I’m clear to say “the Church” and not God because I don’t believe in a God who thinks the way Tyler thinks. Tyler takes Judith (Jurnee Smollett) into the depths of “sin,” I imagine that to mean for Tyler; adultery, homosexuality, and substance abuse. In the end, she’s never really saved, only alive. You’re left thinking that the punishment for her sins is being infected with HIV, a limp and a life of solitude. Simply put, that’s not God, that’s Tyler’s twisted imagination about what happens to people when they lose sight of “the Church.” Then… they wonder why so many people stop going every Sunday – God don’t like ugly.

It’s time for him to have two seats down. I think he had a run, he made us laugh, he may have made some of y’all feel warm and fuzzy inside at times, but it’s over for that guy. He’s gone from bad to “Jesus Christ, I can’t believe I just spent two hours in this movie theater.” At the end of the movie, everyone in the theater was dead silent with shocked looks on their faces before saying, “what the hell just happened?” I can’t lie, I was so shocked and appalled that I busted out laughing and said, “Get me out of this place… this is absurd!” I imagine anyone else who saw the movie felt the same way. I haven’t met one person, even the Tyler Perry stans, who loved the movie.

Even if Tyler Perry, doesn’t go away and people continue to support his movies, plays, products, whatever the hell else the man insists on doing to capitalize on Black dollars in this economy (because white people do not go see that trash). I won’t be around to participate. I’m done with him and I suggest you all do the same. Good riddance.