Home Advice Why Telling Your Ex ‘I Just Want You To Be Happy” Is A Lie
Advice
Featured
Relationships
April 12, 2013 DarrkGable 10 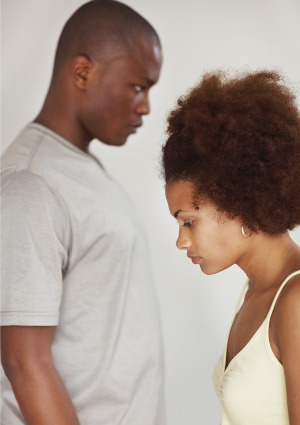 There’s one conversation we hate having with that one ex who always could make us feel that way.   Especially if they know their former bf/gf has a new #him or #her.  I’m not talking about a specifically sexual way, even though they probably were top shelf with that as well.  I’m talking about the feeling where the two of us felt like Darius and Nina in the rain, where all that mattered was us being together right at that moment.  Yeah.  Feeling THAT way.

We all know how the conversation usually starts.  We call our ex, or vice versa,  just to say hey, and catch up.  Small talk is exchanged.  Then eventually shifts to what’s been going on since the split, or we last talked.  The love life makes its way into the discussion, and the caller asks something like, “so how are you and _______ doing?”  The callee will generally say “we’re good” or “we’re happy”.  Then the caller will muster the most fake sound of eation you’ve ever heard and say, “that’s good, I’m happy for you”.

And BOOM!  There you have it.  The happiness lie.

Deep down, we don’t want it to be a lie, but it sorta just turns into one.  “What does their current have that I don’t?” we ask ourselves.  The lame joke that happens to be true is, they have our ex.  Even though we don’t want to admit, the current has some of the qualities that our ex was looking for in us, but we couldn’t or wouldn’t give.  But, since we don’t want to look petty or insecure, we don’t ask.  We just feign happiness for them, and for ourselves to keep the conversation moving.

Is this universal?  No.  Some people really are happy that their ex found happiness.  But the rest of us can find it hard.  Usually it’s because of selfish reasons.  Sure they want the person to be happy, but that happiness is contingent upon the ex being with them.

There’s a level of revisionism that comes with telling an ex we’re happy for them.  In the moments that we’re on the phone, the whole relationship can be replayed in our minds.  We wonder why we split up in the first place.  What more could have been to avoid it?  Hell, we even look at where we might have been a less than stellar partner in the relationship.  All because our former is now happy with their current.  Yet, we remember things in a romanticized way, and not how they really were.  What can make it even worse is when we’re supposed to be happy, and in a better place with *our* new partner.

We’ll be living our life just fine, then that phone call is placed, or is received, and all those old emotions come flooding back.  When we get asked, “how are you and _____ doing?”, we can go overboard with answering.  “Oh, everything between us is great”.  “I feel like this is where I’m supposed to be…right now.”  All the while, still perpetuating a lie about being happy.

See Also:  I Told You! Women Go To Stadium Nightclub Too!

The worse part is that we put ourselves in the position of feeling like this.  If we’d leave them to their life, we’d be able to live ours free of the “what if” factor, at least with respect to having to front.  It’s a natural inclination to sometimes wonder about how our lives would’ve turned out if we had made different decisions.  Actively seeking out a way (for some of us) to torture ourselves is not the business.  If we’re telling someone we’re happy for them, when we’re not, then it is self-torture.

So how can we get away from feeding the lie?  It’s simple.  Leave the phone calls alone.  Delete phone numbers if necessary.  Stay off whatever social network profiles your ex has.  It will keep you from purposely contacting them, and looking like a creep.

Not everyone will heed the words of advice given here.  For those who don’t, be prepared to deal with the “what ifs”, especially if your ex is truly as happy as they say.  No amount of lying to yourself about them will change how they feel in their new relationship, or about their current partner.  However, for the folks that do take the advice, it will help you save face, and possibly your own new relationship too.

See Also:  Revenge Of The Scorned Lovers: 5 Reasons Why Destroying A Cheater's Possessions Is Wrong

Have you ever found yourself telling an ex you were happy for them, even though you really weren’t?  Why’d you do it?  Given the opportunity, would you ever tell that ex the truth?

tags: darrk gable dealing with your ex happiness is a lie
previous Five Things About Men I'll Teach My Son #TBT
next Why Chris Brown and Rihanna’s Relationship Intrigues Us All