Why We Can Forget About the Lakers (For Now)

I spent a lot of time thinking about the Kobe Bryant injury over the weekend. I’m certainly not a Laker fan, but you wouldn’t call me a Laker Hater either (Well…this guy would). I, like most people, find the team interesting because there always seems to be some drama brewing. Also, it’s fun to breakdown the endless Kobe vs. LeBron debate with the rest of Twitter.

In considering the injury’s impact on the Lakers’ future, I started to get a little down. Basketball is a little less fun now, and it sucked to see Kobe go out like King Leonidas in 300. Somewhere along the line, the Lakers Super Team from October became the overmatched Spartans battling the rest of the NBA and scraping for a spot in the playoffs. Who predicted they’d be an underdog by season’s end? 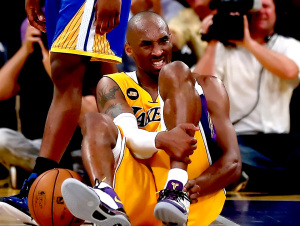 Kobe is watching with the rest of us now, and it’s time to bury this Lakers season because, even if they make the playoffs, they’ll be swept out by the Thunder. The first line of the eulogy has to be: This team played the most disappointing season in the history of the NBA.

It takes a lot of factors conspiring for this big a disappointment, and I see it coming down to four factors. Play this fitting music as we eulogize the 2012-13 Los Angeles Lakers:

See Also:  Two Games Into the NBA Finals...Will the Cavs or Warriors Win it All?

And not just because he looks like the guy on the Pringles can. D’Antoni failed the team in a variety of ways throughout the season. While I don’t think his refusal to take Kobe out of games caused his Achilles injury, it highlighted the bigger problem: his refusal to show the leadership demanded of a head coach. Where was D’Antoni when Kobe and Dwight were sniping each other in the media? Why didn’t he demand more ball movement on offense? Why couldn’t he get consistent defensive effort?

Ultimately, D’Antoni was the wrong guy for the job. His non-confrontational nature contributed to the team’s demise because he refused to take the reins from Kobe and put an offensive structure into place. Instead of “Seven Seconds or Less,” the Lakers played “Kobe and Four Other Guys” which had the team closer to the lottery than championship contention.

Because D’Antoni wasn’t fit for this job, it’s not all his fault. There’s definitely some blame to be shared in the front office. It seems like three seasons ago that Mike Brown was fired just five games into this season. Remember him? Brown’s firing rendered training camp useless and guaranteed the Lakers would be adjusting on the fly with two new players in the starting five.

The failing health of former owner Jerry Buss led to the transfer of power to his children Jim and Jeanie. After impatiently firing Brown, there was the Phil Jackson fiasco where, depending on who you believe, Phil was promised the job and had the rug pulled out from under him in favor of D’Antoni. This reportedly caused a rift between Jim and Jeanie…who is, of course, engaged to Phil Jackson.

All this sounds like an episode of The Game; except it’s real life and shows Grand-Canyon-sized cracks in the once united Lakers front office.

The new Kobe versus Shaq! As referenced above, these guys spent more time talking to the media about each other, injuries, and how you should play through injuries than they did talking to each other. All of those links tell the story. This team, even among its leaders, was fractured throughout the season. This is the similar to the 2004 season when the Lakers brought in Karl Malone and Gary Payton…except this team won’t be losing to the Pistons in the Finals L.

Not all of the problems with this Lakers season were avoidable. Steve Nash (hamstring, old age), Dwight Howard (back, shoulder), Pau Gasol (foot), Metta Worldpeace (knee, craziness), Steve Blake (abs), Jordan Hill (shoulder), and Kobe Bryant (ankle, Achilles) all missed significant time this season. That’s a lot for any team to go through, especially one with the heightened expectations of this team.

See Also:  The BET Awards for this week in Pro Sports

In the end, though, this team was undone by dysfunction at the highest levels down to the players on the court. We’ll all feel bad for the Lakers now that Kobe has become a martyr for the season, but that shouldn’t overshadow this team’s dubious distinction as the most disappointing one in decades.

What about you, SBM Sports Fans? How will you remember this season for the Lakers? Do you feel bad for Kobe! Hit up the comments and let me know!

tags: Dwight Howard kobe bryant Los Angeles Lakers nba
previous I Lost My Job: Why You Should Pay Attention to Politics
next What You Need to Know About Changing Careers and Starting Over