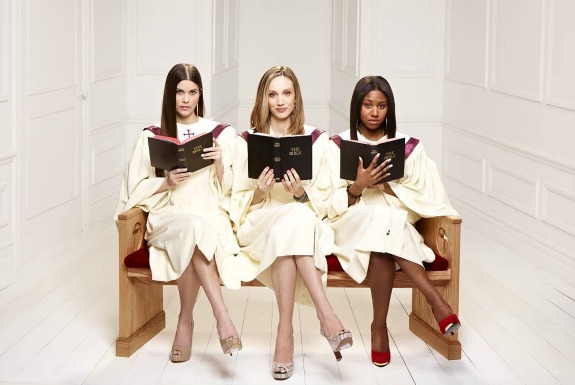 Fascinated is probably the only word that comes to mind when I think of Lifetime’s new reality show, “Preacher’s Daughters.” Believe you me, you don’t ever catch me on Lifetime; it just isn’t my station. I heard about this show through a tweet from my cousin, and it caught my eye. This show sparks conversations on so many levels, and I thought it made sense to share my thoughts.

Preacher’s Daughters follows the lives of three families from various areas of the country. Each family is deeply religious and the patriarch is a Pastor. These families also have a daughter or daughters being brought up in the Christian faith. This dynamic creates a dichotomy that I think many of us are familiar with. A huge underlying theme in the show is the ongoing struggle with self-identity. How do you become who you want to become under the expectation of your folks? It’s rough to say the least.

From the moment I saw the title of the show I knew it was something that I had to follow. I was interested to see exactly how lenient the parents would be with them. I wanted a clearer idea of what a household like that was like. I was particularly interested in seeing what the daughter’s desires were. In terms of lifestyle, did they want to follow in their parents footsteps? Do these children want to indulge in what “normal” teens do? The show has a little bit of both.

There is a family on this show named “The Kollofs,” and the patriarch is a former professional wrestler named Nikita (that’s for any 80s NWA fans). Nikita is actually divorced from the family’s mother but is still very active in his daughters’ lives. Nikita has five daughters, but the one the show focuses on is named Kolby. Kolby is 16 and she’s very devoted to her faith and doesn’t seem to have the same urge to give into “the ways of the world” like the show’s other counterparts. Kolby has an older sister who admitted to having premarital sex and it crushed her. This activity seemed unfathomable to Kolby. She felt like she could no longer look up to her older sister.  This could be attributed to the extreme box these children grow up in.

Conversely, you have the daughter of the Coleman family named Taylor. She’s completely going against the grain. She has an insatiable desire to just be what she sees as normal. Her father, however, isn’t having any of it and he forbids much of what she wants to do. As a result she rebels, and although it’s wrong, I also can’t blame the young lady.

By no means ladies and gentlemen am I a parent. I hope to be one day and this show sort of helps me figure out how much rope I’d give my child to hang themselves, so to speak. My stance on this show, the issue of children living up to a certain standard, and the desire to be who you are is simple.

See Also:  I Can Date An Atheist

Every father on this show is naturally protective. I think that’s a given being that they have daughters. Along with that, every father on the show has a past. There’s no surprise there as we’re living beings; if we don’t have pasts then something is wrong. A common thing you see arise on this show is the parents’ desire for their child not to be involved with the wrongs that they were involved with. That’s a healthy desire, but there’s just no way you can keep your child from everything.

It has to be said that when it comes to religion and fully experiencing whatever you subscribe to, you can’t do that by it being forced on you. Everyone has to come to those points in their life on their own if it is ever to be. These fathers had the freedom and opportunity to experience everything life had to offer. They had the chance to figure out for themselves that a certain lifestyle just wasn’t for them. These men found a passion and found what they believe to be a calling. It just so happens the calling was involved in the church.

Like it or not, it’s my belief that these daughters (and sons for that matter) deserve the same liberty that their parents had. Growing up in such a stringent box is not going to holistically develop your child. I was blessed with a mother who always preached having balance. There must be balance to everything and for the most part, the daughters in this show try to advocate for that. I give them props for doing so.

See Also:  Is Rape a Joke to Our Youth?

As you watch this show, you’ll see how extreme these parents run their households. I know the children have a responsibility to at least be respectable individuals. I’m all for that. I simply deem growing up with so much pressure as unfair.

This show touches on many other issues. Don’t be too surprised if I follow this up with something else. These were only my general ideas, but I really want to know how you feel on this whole issue. Let’s talk about it. If we differ, feel free to let me know.  I look forward to the discussion; these are my words and I make no apologies.

tags: christianity Commentary Lifetime Preacher's Daughters religion
previous What You Need to Know About Changing Careers and Starting Over
next Why the Media Is More Tragic Than the Tragedies