Are They All Playing for Second? The NBA Playoff Rundown 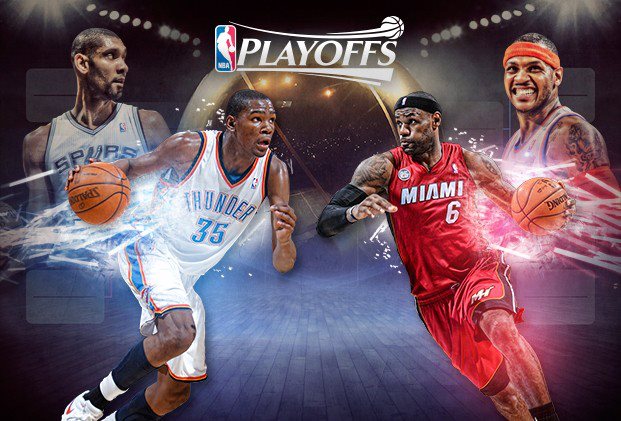 The NBA Playoffs kicked off this weekend, and we got a chance to see every team’s “Second Season” debut. The home teams looked good, going 8-0 and winning by an average of 16 points. The road teams will get their chance to rebound, but the bigger question is: Who can challenge Miami in a seven-game series? On the surface, the answer is “nobody,” but let’s break down the NBA’s first round, predict the winners, and decide if they’re just playing for second place.

As confident (and loud) as Knicks fans have become during the team’s excellent end to the season, even they would admit the Celtics make them nervous. No matter how much the team has aged, how torn Rajon Rondo’s ACL is, or how bad Jason Terry has been, the Celtics have earned their respect while running the Atlantic Division in recent years.

Saturday’s game was a potential turning point in this series. The Knicks were the better team and showed they are ready to make a run in the East. Though neither team played great on Saturday, New York simply has more weapons than Boston in this series. Carmelo Anthony and JR Smith will handle the scoring, and you assume Tyson Chandler will get involved later in the series (that the Knicks won without Chandler even taking a shot is crazy). If the Celtics were healthy, this would be a more interesting series. As-is, New York will outlast Boston in six games.

Can they beat Miami? New York has been playing as well as a fan could hope for in recent weeks. If everything goes perfectly, they have a shot. However, they can’t get three points combined from Shumpert, Chandler, Copeland, and Novak against Miami (as they did Saturday) and expect to compete. Worth keeping an eye on if they are clicking on all cylinders by the Eastern Conference Finals.

Can they beat Miami? The Pacers have been hyped for much of the season as a potential contender against Miami. They were winning their series against the Heat (without Chris Bosh) in the playoffs last season, and many of their key players (Paul George, David West, Lance Stephenson, and Roy Hibbert) are a year better. They should be a legit threat, but they rely too much on their defense and it isn’t good enough to keep Miami under 85 points consistently (which it would need to be to win). They’ll probably lose to Miami in five games, and it wouldn’t be fun to watch. Next! 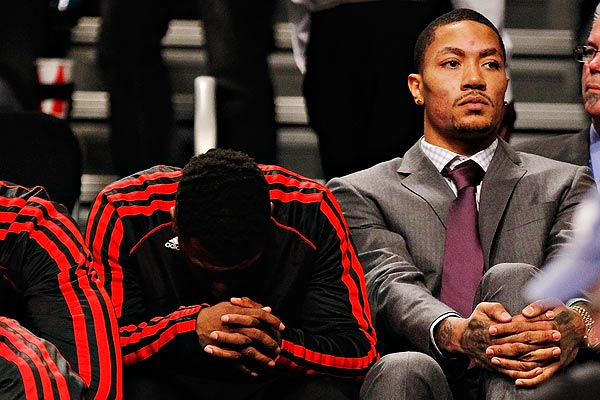 Seriously, Derrick Rose, WTF?! This meme was funny last season after Rose tore his ACL in the playoffs. This year, though, he’s been practicing fully since last month and we’ve heard the same recording of his status as the team awaits his return. So what gives? It damn sure looks like Rose is ready to go, and he’s admitted his hurdle to returning is mental. I’ve never torn my ACL, but I think after a few weeks of practicing hard, my competitiveness would force me to get back on the floor to help my team compete. There has to be something else there.

As for this series, Brooklyn is too much for a Bulls team with a hobbled Joakim Noah and no Rose. They will take this series in five, which is a shame because it would be a different story with a healthy Chicago roster. By the way, who saw this coming?

Can they beat Miami? Brooklyn has emerged as another team with an outside shot at competing against Miami. The Heat have no answer down low for Brook Lopez, and Deron Williams now looks like the $100 million player we thought he was at the start of the season. The issue is that they have no one to deal with LeBron James or Dwyane Wade (apologies to Joe Johnson). I can’t see Brooklyn winning when the two best players on the court are wearing Heat jerseys.

The West has a similar feel to the East. The Oklahoma City Thunder is clearly the best team on that side of the bracket. In hanging 120 points on the Rockets, you saw them at their best on Sunday. Russell Westbrook and Kevin Durant did what they do. Ibaka was effective. The bench was active. And Kendrick Perkins scowled…which I’m pretty sure is his best skill at this point. You even saw the Thunder’s underrated defense on display forcing Houston to shoot poorly and racking up nine steals and blocks. 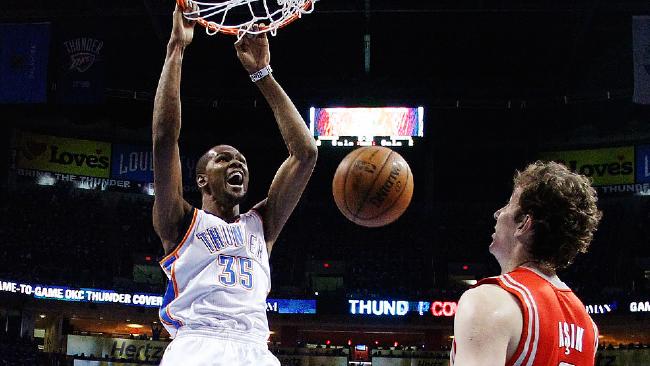 OKC is the most complete team in the West, and the other contenders can’t score enough to match Westbrook and Durant on the perimeter. The Clippers and Spurs have the best shot, but they may not get past Memphis and Denver respectively. So…to the question at hand:

Can they beat Miami? I’m predicting a repeat of last year’s Finals. The problem for OKC is they do what Miami does, just not as well. Their strength is on the perimeter, with Bosh and Ibaka essentially cancelling each other out as a “stretch 4” for each team. The Thunder still turn the ball over too much and still play Perkins way too much for me to think anything will turn out differently. LeBron and Durant both improved this year, but that means LeBron would dominate a series between these two teams. Plus, James’ best brings the best out of his teammates in a way that Durant can’t match right now. It’s no fun to predict, but Miami is the choice to repeat. LeBron is on another planet, and the rest of the Heat are playing well. Wade and Bosh are still good, the shooters are shooting, and Birdman is contributing in ways Haslem can’t anymore.

Who do you have in the Finals this year? Can anyone knock off Miami? Will OKC come out of the West? Is it time for Derrick Rose to return? A lot of questions as the playoffs begin, who’s your pick as the champion?

tags: 2013 nba Playoffs
previous While You Were Sleeping: CISPA and the Forfeiture of On-Line Privacy
next Sports Is Life: Playing To The Level Of Your Competition