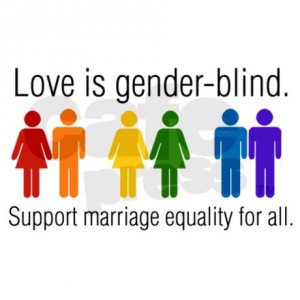 On April 23, 2013 France passed their “Marriage For All” law that extends marriage and adoption rights to gay couples. France is the 14th country in the world to pass such a law.  I couldn’t be happier for France because rights such as this shouldn’t be limited to certain parts of a country but should be extended to all citizens. France and 13 other countries get that. America doesn’t. Perhaps it’s because marriage equality is such a polarizing issue, but our federal government just can’t get it together. Providing certain rights to a certain subset of our citizens but not others is not something that should be left up to states. Although I would like to point out that my home state recently made history as the first state to affirm marriage equality at the ballot box.

Many of my friends have been getting married, I recently attended my first same-sex marriage and it was absolutely beautiful. The two brides (African-American and Sudanese) seemed to be completely in love and I’m happy they can start their lives together with the same rights to marriage as any man and woman in this country. It’s a shame that if they lived in a state like Virginia, then it wouldn’t be possible. Before I got to the wedding, I wondered if it would feel any different from a heterosexual wedding, but I saw and felt no discernible difference between any heterosexual weddings I’ve attended.

One glaring thing that I noticed in the wedding is that neither of the brides’ parents were in attendance. I noticed this when both were given away from their brothers. The parents of the African-American woman still had a semblance of a relationship with their daughter, but they chose not to attend the wedding. The parents of the Sudanese woman stopped speaking to her after she gave birth to their son (through a sperm donor). Regardless of their opinions, I personally thought it was sad that their parents couldn’t be there for their children on one of the biggest days of their lives. The fact that the African-American parents had some resemblance of a relationship with their daughter and the African parents didn’t was not lost on me.

See Also:  Benefit of the Doubt

I started to wonder if it was possible that since my parents are African would they accept me if I happened to be gay. I don’t doubt that my parents love me and would do anything for me since I’m their favorite child, but both of my parents are also conservative. Although I’ve done everything in life to meet their approval, all that would go out the window if I were to tell my parents I planned on doing anything other than getting married to a woman before the age of 35 and having 3 children and 2 dogs. You can’t help who you are and what you’re attracted to so for your family and loved ones to ostracize you for that must make life close to unbearable. We tend to lose sight of that in this world of heterosexual privilege.  Even if I was against marriage equality before I attended that wedding, I don’t think I would have been against it after I left. I’d have to be heartless to be so.

The fight against marriage equality is a losing one. It’s going to happen sooner or later in all 50 states. Politicians and public figures who ignorantly disregard the rights of homosexuals will be looked back through the lens of time in the same light as figures such as Bull Connor and George Wallace. Just because America is not the forerunner in reversing this archaic way of thinking doesn’t mean its not going to happen. America also lagged behind in recognizing other human rights but we eventually caught on with the rest of the world.

See Also:  Why You Shouldn’t Believe In Happy Endings

Do you believe in marriage equality at the state or federal level? Do you know any gay married couples or couples in civil unions? Do you think your family and loved ones would accept you if you happened to be gay or come out the closet?