SBM Sports: Did ESPN Have it Right in Looking Past Jason Collins? 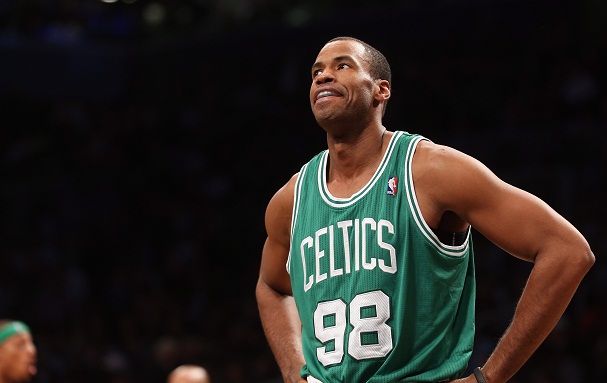 What a weekend in pro sports. The NFL Draft came and went. Steph Curry and Nate Robinson owned the NBA Playoffs. The Lakers did the exact opposite of owning the playoffs…and then we got to Monday.

First, the New York Jets made news by releasing Tim Tebow, the most talked about backup in NFL history. A few hours later, Sports Illustrated released their exclusive interview with Jason Collins, a 12-year NBA veteran, who decided to come out of the closet.

I learned about the Collins news first on Twitter. As the reactions and retweets sped up, and the GChats and texts hit my inbox, I started to formulate my reaction to this news. My feelings, in order, were:

“Good for him, that couldn’t have been easy.”

“Hopefully the Twitter trolls don’t say anything too stupid.” (They did.)

Overall, though, I thought I’d care more. After all, this is the closest thing to an active player that has come out in major pro sports (Collins is currently a free agent). And for years, I thought that would be a big deal, similar in impact to Jackie Robinson crossing the color line in baseball.

Obviously ESPN agreed with this sentiment.

The Collins news wasn’t deemed important enough to preempt the recycled analysis of Tebow’s release or the Lakers’ season ending loss to San Antonio online at ESPN.com. And it took the network nearly an hour to cover it on television. By the airing of the afternoon episode of Sportscenter however, Collins’ coverage was sandwiched between Tebow, the Lakers, and NFL Draft talk. What’s the deal?

As of 3pm Eastern on ESPN.com, the lead story was the New York Giants’ drafting of a backup quarterback in the fourth round this weekend. Though Collins’ name was a headline off to the right…under Tebow of course. Check out the Yahoo! Sports homepage right around the same time: 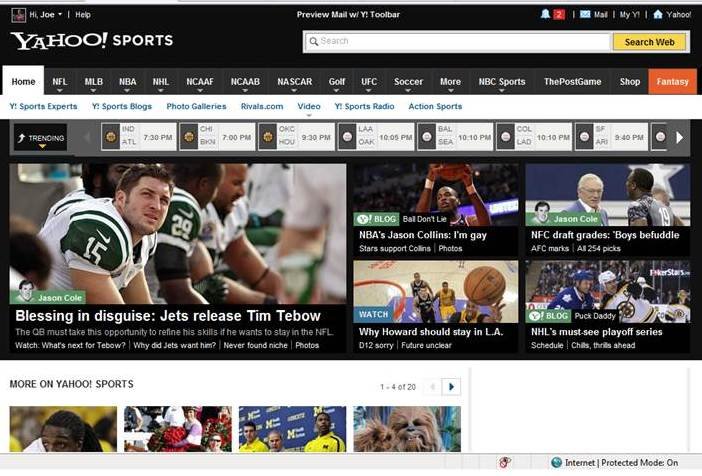 I think ESPN (and Yahoo! Sports) realized the same thing I did: Jason Collins coming out as the NBA’s first active gay player isn’t as big a deal as it would have been just a few years ago.

Collins’ announcement was important for his personal vindication (as he admitted in the article). He shouldn’t have to feel pressure to live his life according to anyone else’s standards. I’m glad he is free to be himself and I sincerely hope his story gives others the courage to do the same. But has this really moved the needle in sports or pop culture in any lasting way? I doubt it. So why isn’t this as big a deal as many would have predicted?

First, Jason Collins has been a fringe NBA player for years. He’s never averaged more than 6 points or rebounds per game. He’s regarded by league executives and media members as a great teammate and leader, but that doesn’t matter to most fans. How would the casual fan know that anyway? How many Jason Collins headlines have you read before today? It’s safe to say many basketball fans who had heard of him assumed he retired years ago.

After digesting the initial news and coverage of Collin’s announcement, I believe the first athlete to truly move the discussion of gays in professional sports forward will have one key trait:

His or her legacy must be solidified by exceptional play, not sexual orientation.

Collins earned himself a place in the NBA for over a decade. That’s an achievement very few in pro basketball can claim. But he’ll forever be remembered for today, rather than his 12+ years in the league.

Overall, I think Collins’ greatest triumph will ultimately be personal. He did something that requires courage, and will affect how we see him forever. It won’t change how we see gay athletes however. That’s a big distinction because it means most of the discussion on this topic is still yet to happen. The release of 42 this month was special because it highlighted the contribution Jackie Robinson made to the country’s most important sport at the time. Robinson changed sports forever, which I think a gay athlete will do in the future. A movie like 42 was only possible, though, because Robinson was damn good. His play etched the path for others by increasing acceptance in the sport.

Monday’s announcement, and the resulting (lack of) coverage showed that, while the tide is turning, the leader on this frontier has yet to come forward.

How did you react to the news? Do you think Collins had a bigger impact than I do? What if Collins was an All Star? Would that change your view on the topic of gays in sports?

Give me your take in the comments below!

previous Chris Broussard, Political Correctness, and Staying True to Your Beliefs
next The Game of Life: Winning Time