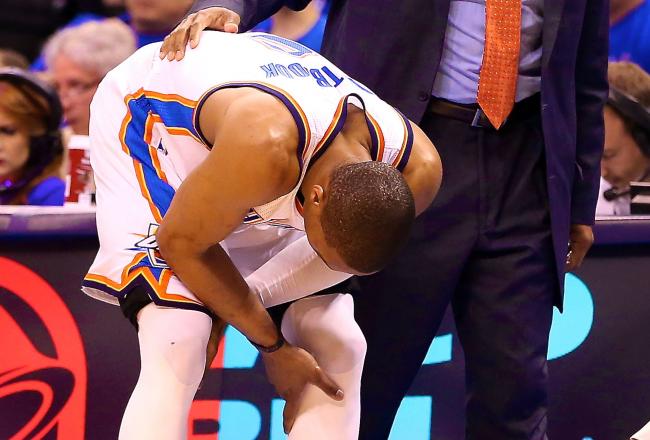 The NBA Playoffs have (finally) moved on to the second round, and there may be a new leading championship contender.

Two weeks ago, I wrote about the “other” teams in the running for the title. I argued that Miami will run through the East, and should rightfully be favored over Oklahoma City; the team I thought would come out of the West. Now that Russell Westbrook is out of the playoffs with a torn meniscus, I’m forced to reconsider that position.

In the games since Westbrook has gone down, Kevin Durant has been amazing. Embracing his new role as “point forward,” Durant has absorbed many of the shots that Westbrook normally takes. The results were rocky at first; OKC took a little more time to beat Houston than many originally predicted. Sunday’s game against Memphis showed how good Durant can be. I had nightmares thinking about LeBron James’ dominant performance against my Detroit Pistons years ago. 🙁

As amazing as Durant’s performance was, you can’t ignore the nine-point deficit he had to dig his team out of to get the win. There’s no way he can do that seven more time against Memphis and (most likely) the San Antonio Spurs.

And that’s the problem for Miami: the Grizzlies and Spurs are bigger threats to a Miami title than the Thunder. Here are three reasons why…

See Also:  Here's Why LaMarcus Aldridge has to Sign With the Spurs

The Grizzlies and Spurs have better bigs – 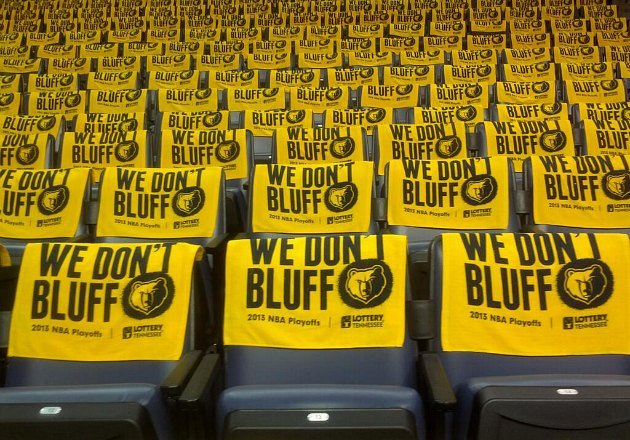 Zach Randolph and (newly crowned Defensive Player of the Year) Marc Gasol are the anchors down low for Memphis and they do not bluff.

We all watched them reduce Blake Griffin to a shell of himself over six games in the first round. In this round, they dominated the matchup with OKC’s big men. The two alone outscored and outrebounded three of the Thunder’s top bigs combined. Chris Bosh is a great player, but he wants no parts of the Randolph/Gasol combo.

The Spurs have Tim Duncan, the greatest power forward of all time who’s having his best season in years. Making short work of the Team-Formerly-Known-as-the-Lakers gave him some rest for an overmatched Warriors team. San Antonio should run through Golden State as well (which sucks by the way…Steph Curry is fun to watch), so he’ll make it all the way to the Western Conference Finals without really straining himself. That’s rest he can use in a seven-game war against Memphis. Next to Duncan is a cast of guys who, in typical Spurs fashion, fit their roles perfectly. Combined they can definitely overwhelm the Heat’s front line.

This is a much bigger advantage for San Antonio. The Heat had a great season, looking unbeatable at times. One chink in the armor though – and you have to look awhile to find it – is Opponent Three Point Rate, or the percentage of threes given up by a certain team. The Heat rank in the bottom five in this stat. Their defensive strategy allows for hot-shooting opponents to take advantage of open shots from three. This is why New York beat Miami three times out of four in the regular season.

If you can get hot against Miami, you have a shot to beat them three points at a time. San Antonio has the shooters to take advantage, ranking third in the league in three point percentage this season. In fairness, Miami ranked second in the same stat, so the Spurs would have that to deal with on the other side of the floor.

The East is still really weak –

I covered this in my original post, but it bears repeating. The Heat enjoyed a week off before yesterday’s game against Chicago. They’ll probably make short work of the Bulls, and have another overmatched team – either the Pacers or Knicks – to contend with after that. Of course the Heat would prefer to be rested and healthy, but there is a disadvantage to all that free time.

First, Miami won’t be able to scout its opponent ahead of time. Without a solid gameplan to practice against their specific opponent, the time off won’t help them strategically. Second, the age old debate of “rest versus rust” puts Miami at risk in the first game of the Finals. Let’s say San Antonio advances and shoots well against the Heat in Game 1 because they are in rythym coming off a longer series in their Conference Final. Winning the first game would greatly shift the series toward San Antonio, giving them homecourt advantage.

Miami is still the rightful favorite to win the championship. In a strange way, though, their title shot actually worsened with the injury to Russell Westbrook. Memphis and San Antonio pose a greater threat to the Heat’s chances to repeat. Looks like Patrick Beverley should be booed in two cities now.

What do you think? Sure Miami is still the favorite, but will Memphis or San Antonio give them a more competitive series? Do you think OKC still has enough to make it to Finals?