Home Featured I Never Stopped Loving Her
Featured
May 13, 2013 WisdomIsMisery 13

I Never Stopped Loving Her

I’d known her for years, but our relationship didn’t get serious until college. I was just a freshman when her highlights caught my attention. I never noticed the accents of her curves before. Was she built like that in High School?

She’d always looked good to me, but I distinctly remembered her being thinner. Now I couldn’t take my eyes off this new body of hers. She had definitely grown in all the right places over the summer. She had the perfect form now. She had gotten into great shape, and this after I had heard rumors that she was giving up run-ons. Whatever new content she was using was working. I had underestimated the affect minor changes would have on her body.

She looked completely different, almost unrecognizable. She was nothing like I remembered growing up as casual acquaintances. Before, when people asked if we were serious, I laughed away their questions, assuring them we were just friend. This was a new environment. I wanted to be more than just friends. I was looking forward to working within college ruled. I hoped taking her for granted in my youth hadn’t let the opportunity for something more serious slip through my hands.

As expected, it wasn’t long before other men on our campus took interest in her new look too. It seemed like everyone on the yard was trying to use her, but I did my best to play it cool. After all, she and I had History together. That had to count for something, right? I wasn’t just some random guy trying to rap with her.

The freshmen used their broken understanding of foreign tongue, but she wasn’t impressed by their rudimentary serenades from Spanish and French 101. It made me nervous that all of sudden these new men had their eyes on her. The older cats tried to impress her with their Greek Letters. She wasn’t used to it, but I could tell she like the way the upper classmen eyed her. She tried to hide it, but the way they confidently approached her turned her on. It didn’t matter where – on the yard or in the front of the class – the older guys were always trying to get their lips on her.

She tried to feign like she didn’t like the way they reached out for her when she passed through the margins of the classrooms; as if their unsolicited comments on her body weren’t secretly appreciated. I eyed her from afar with nervous apprehension. The new attention to detail showed a side of her I was unfamiliar with. It made me nervous. With all this new competition around, I didn’t know if I still had the skill to keep her entertaining anymore.

I admit I was jealous. I might have even hated on those older men, especially the poets and spoken word cats who hung around the yard doing their best to tempt her back to their bedrooms with poetic promises over rhythmic allegories, analogies and metaphors, like big sharks in a small pond. They were the worst! It was almost as if they felt entitled to possess her simply because they had studied her form from afar, but they still didn’t know her like I did. If all these measures were foreshadowing the future, I knew I was going to have to commit to her sooner rather than later before someone else beat me to the punch line.

Trying to find the write words to say to her was the most frustrating part. Every time I got her alone, I had a mental block. I even went through a few drafts before I figured out how to best express myself, but it was worth it. Somehow I got it perfect, and she accepted an invite back to my room. Just in case I didn’t have another chance, I took full advantage of the opportunity.

Once I had her alone to myself, I refused to let go for the remainder of the night. I had so much I wanted to get off my mind I couldn’t help but immediately spread her across my floor, bed, and later, I even aggressively took her on top of my desk. It was so good she said my name in the beginning and it ended with a powerful climax. I knew the neighbors would talk about the clamor we made when the rumor mill kicked off the next day, but I didn’t care. I wanted them to talk about us. Brag about the experience we inspired. So good, it felt like they experienced it themselves, but all they could do was imagine it. It was me and her that created it.

Still, only college-aged, I struggled to remain faithful to her. In my heart, I wanted more than a friendship, but I still wanted to entertain other opportunities. Yet, even when we were apart, her whispers would haunt my subconscious:

Do I ever cross your mind when you’re listening to 808’s with other women?

Although I was too stubborn to admit it, I always did. She was the epicenter of my life. No matter if I went left or right, no matter how much I tried to center my life apart from her, it never felt justified. I couldn’t escape the love I had for her. She haunted any relationship I attempted to have beyond her, as if she was the one that truly inspired every heartfelt word I half-heartedly tried to convey through other methods to other women that weren’t her. Frankly, no one else compared to my first true love.

I realized that I needed her back. No more games. I was young, but I didn’t care how it looked to others.

I justified making her the center of my life…

just, with emphasis added, so everyone would always see how important she was to me.

You see, I’ve strayed a lot. I’ve tried a lot of different mediums, but I never stopped loving her; I just made the mistake of taking what she meant to my life for granted over the years when all she ever asked from me was for my actions to mirror my words.

For those fleeting times when I failed to show you how much you mean to me, gave away the times we shared together for a pittance exchange – regrettably,  sometimes even for free – I’m truly apologetic. But, I hope you know that even when I struggle to express it… 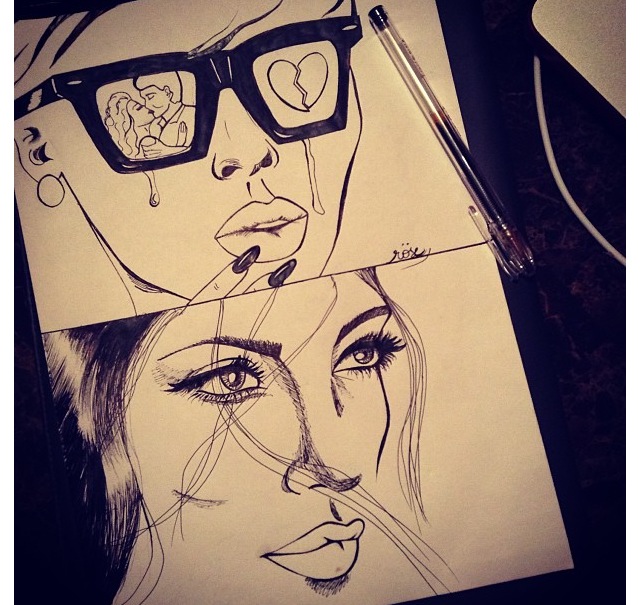 Writing, I will always love you.