Home Featured Why can’t HE just be my Friend With Benefits?
Featured
Single Black Mail
May 23, 2013 SBM 44

Why can’t HE just be my Friend With Benefits? 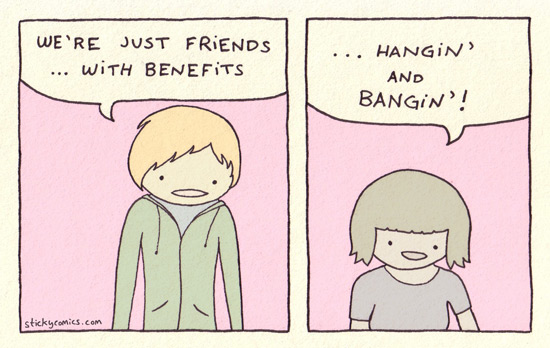 Don’t forget that you too can have your question answered by one of the SBM staff, in addition to several thousand readers by sending a short, well written and explanative question to sbm@singleblackmale.org

I am going to get straight to the point. I have known this guy since 2011 and we’ve never dated but we’ve had relations. The dynamics of our friendship is exactly how I like it. We have that type of friendship where we can fool around and nothing is interrupted [and] we can stay friends. I never tried to make it official or nothing like that but [when] I call him my friend and his whole demeanor changes like he catches an attitude. Or something, I know you are thinking that is because he likes you. I don’t think that is the case because when he introduces me he says, ” Oh this is ___”

I’m waiting for him to call me a friend but he won’t say it! Everyone always thinks we are together and when someone in public asks are we together or insinuates that we are a couple and I correct them and say that we are friends the atmosphere changes sometimes. But he doesn’t want to make it official; which I definitely don’t want him to. But the sex is great we get along perfect we debate and we can go long periods of time not talking to each other and start back being cool. Like we did not just not communicate for a whole year lol. Also when we are together we act like a couple and I pay attention to it and act like I don’t notice it for example we went out and he saw that I was wearing blue he was going to wear red but then he switched to blue.
I’m not good with signals can you tell me what’s going on?

First thing, congratulations on being one of the 17 women who are happy with their Friends with Benefits situation and don’t want more. I’ve been answering questions a long time, and finding a woman happy with her Friends with Benefits situation is like finding a Tyler Perry movie with an intelligent plot. Honestly, I could go on and on talking about this, but that wouldn’t be helpful to anyone.

See Also:  Top 5 Things NOT To Do When Meeting The Family

I’ll keep is simple this time.

Out of your entire letter, you made one mention of him not wanting to be more. You say “But he doesn’t want to make it official”, and nothing more. I can’t help but believe, deep down, if you were really trying to convince me and everyone reading this of how perfect your FwB situation was, you would say more.

So, I’m going to wrap this up quickly so you have more time to figure out the situation that 75% of men have come across before, and that is handling the FwB who wants to be much much more.

There are a million ways to go about it, but I suggest the SBM approach … ignore it and enjoy the “relations” as long as it lasts. When “the talk” happens, just start giving some head until everything is forgotten. Eventually that won’t work anymore, and then you just say “the friendship means too much to me … I wouldn’t want to risk it with a relationship”. That’ll buy you another 2 months.

See Also:  14 week fitness challenge - was it worth it?

SBM aka Your best friend with the best benefits aka Guts

tags: friends with benefits FwB FwB gone wrong
previous Is It Easier For Men To Say No Than It Is For Women?
next 7 Tips For Discussing Relationship Problems Without Creating Drama