Home Featured What’s in it for Me: Black Men Avoid Marriage Longer than Every Other Race
Featured
Marriage
June 3, 2013 WisdomIsMisery 353

What’s in it for Me: Black Men Avoid Marriage Longer than Every Other Race 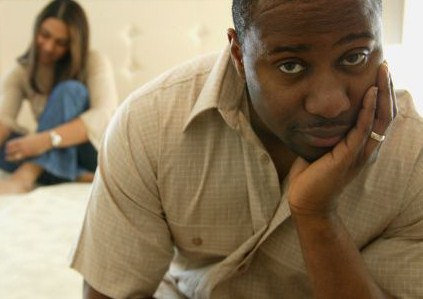 On a prior post, It’s Ok to Be Superficial, an interesting comment thread transpired on why marriage occurs so late in the black community. I thought it was interesting and needed minimal context for everyone to follow along. I’ve selected certain excerpts from the 12-reply comment thread as follows:

Wildflower: I don’t think men are saying no to the idea of marriage, a lot of them are not mentally or financially ready for the responsibility. There are a lot of women who are marriage material but that doesn’t men that a man is gonna swoop down and put a ring on it just because she is ready.

12 Point Buck: I respectfully disagree– I think more and more men in the USA and in some parts of Europe ARE saying no to the idea of marriage.

Why this is happening is a whole different discussion, but I see the trend quite plainly.

12 Point Buck: We can agree to disagree.

But I did want to point out this government census on marriage in the USA, which shows that the overall marriage rate is on a downward trend.

Given that men are usually the ones to propose marriage, I feel like this chart is decent evidence that there is a trend for guys choosing to not get married.

WisdomIsMisery: If I may jump in this thread real quick @WildFlower and @12PointBuck, because you’re both right and this is an area I’ve written on numerous times – my most recent write up being here, The State of Black Marriage. Excuse the plug.

In Europe, people of all races have statistically and historically had lower marriage rates than in the US so that’s not the best apples to apples comparison. That said, even in the US marriage rates are down (as we all probably know). However, down doesn’t equate to obsolete as some “the sky is falling” types in the blogosphere have preached. Going by the stats (and facts, if you bother with those sorts of things), men and consequently women, are marrying later in life but by and large over 90% of people of all races will marry within their lifetime.

Now Wildflower said an interesting statement, a theme of which I’ve seen on a lot of comment threads on this site and abroad: “There are a lot of women who are marriage material but that doesn’t mean that a man is gonna swoop down and put a ring on it just because she is ready.”

While I agree with this statement, as it pertains to men – especially black men – I have seen a theme and/or a belief that men now feel they need more financial and career accomplishments before they can have a wife; whereas rumor has it other races believe a wife is generally a component of, not a mutual exclusive goal of measuring their success.

So my question is – and I’m sure I’ll eventually write about this – are these men operating wholly independent of reality or do they (black men, etc) think this way because their primary counterpart of the opposite sex have demonstrated that this is of value to them as well? Stated another way, do black men marry later because they believe (rightly or wrongly) they need more financial, material, and career successes in order to get a black wife?

Just seems strange to me that black men would randomly or arbitrarily place material and financial success over marriage. Anyone is welcome to respond. Ill address in a full write up later.

Amaris79: I am going to have to do some substantial digging to find this study but the general theory is that material STABILITY is emphasized on both ends (in their own special ways) due to the unique volatility of the Black American existence. Namely, there exists an underlying fear that everything could be lost in a single moment, so they compulsively seek whatever they believe to be stability/security to counteract that fear BEFORE placing someone else into their mix. It is different for other races-in America specifically-as there is a belief that either a “fallback” exists (whether through parents, family inheritance, etc) or that since they er..came from no bottom they can thrive under any circumstance without shame.

Now, I can neither tell or explain how that translated into the bling/no scrubs versions that seem to be so pervasive, but whatevs.

12 Point Buck: “are these men operating wholly independent of reality or do they (black men, etc) think this way because their primary counterpart of the opposite sex have demonstrated that this is of value to them as well?”

I think it may be something altogether different, but still marginally related to meeting women’s value expectations. To explain, I will need to make a simple, reasonable assumption, so please bear with me:

Now if this assumption is true for a particular woman, then what happens when she excels in life, and acquires a high level of money, social status, professional success, ambition, etc. for herself?

If the original assumption still stands, then a lot of men will necessarily fall short in comparison to her accomplishments, and consequently will be less attractive in her eyes.

Therefore, in a lot of ways, it would make sense for men to delay marriage until they get to this “high-value” level. Because by doing so, they maximize the number of women who are attracted to them, giving the best possible conditions for finding an ideal wife.

Wildflower: WIM, I didn’t see your post until after I commented but it’s on point.

I know this may be the worst analogy ever but I’m trying to make a point here. Every time I visit a church, I make it my business to see if the pastor is married or not– and in my 30 years I’ve only seen one that was single. Why? Because within the church having a wife is smiled upon. If we were raised seeing marriage as a good thing, most black men would settle down (in my opinion). But most of us was raised by single mothers so our view on marriage is a bit distorted. How can we admire something we are not familiar with?

I remember a white male friend of mine told me that his 33 year old sister was close to depression because she was not married. Now in our community, that is nothing new to us. I was shocked to hear ole girl was 2 seconds away from popping anxiety medicine but we live in two different worlds when it comes to our expectations on marriage.

@mpj2k4: I disagree too. For example I used to work in a call center and there were dozens of pretty women above thirty that was looking to finally settle down and I met some guys in that age group that had their stuff together and they wasn’t thinking about marriage. The ratio was too good for the men that they wanted to just have fun. With divorce being high and drama that can bring, added in with the ratio of women looking for good brothas, I don’t think men really want to get married.

Wildflower: I hate to pull the race card @mpj2k4 but are you referring to black men or men in general?

And no disrespect to anyone but I personally think that black men don’t value marriage. Having kids, yes but having a wife no. It’s rare to see a white man in his 30’s single as opposed to black men.

Also, it’s not like black men have a high history of marriage anyway hence all the single parent homes. So this is not a trend that just started today, this has been an ongoing issue.

I highlight this comment thread for a number of reasons. For beginners, I like seeing intelligent, respectful debates occurring on SBM (thank you for this!). Secondly, this is a popular sentiment – rumor or fact – that I’ve heard expressed on SBM, on-line, and off-line, “black men don’t prioritize getting married.” Lastly, if true, I have no idea why this is occurring.

See Also:  Till Death Do Us Part: Some Thoughts On Wedding Vows

We can debate a lot of things but for the sake of today’s debate I’ve included a 2001 census table below (there may be a more recent table but I’m too lazy to look for it and the stats have more than likely only gotten worse) which shows that black men and women marry later than every other race. I already know some of you will dismissively say, “You can’t put an age on marriage!” and I’ll grant you that opinion. However, even by age 40, only 75% of black men will be married. The next closest, Hispanic men, is 86% by this age. Further, since men of all races traditionally ask women of all races for their hand in marriage, the delay in marriage is likely driven by men. 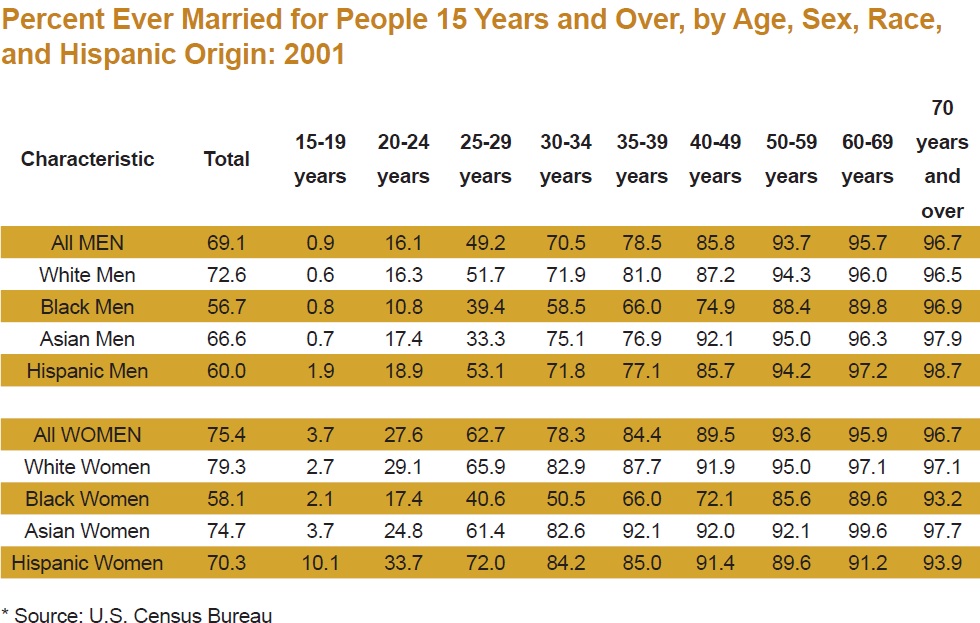 Today I have one simple question: Why are black men avoiding marriage longer than every other race?