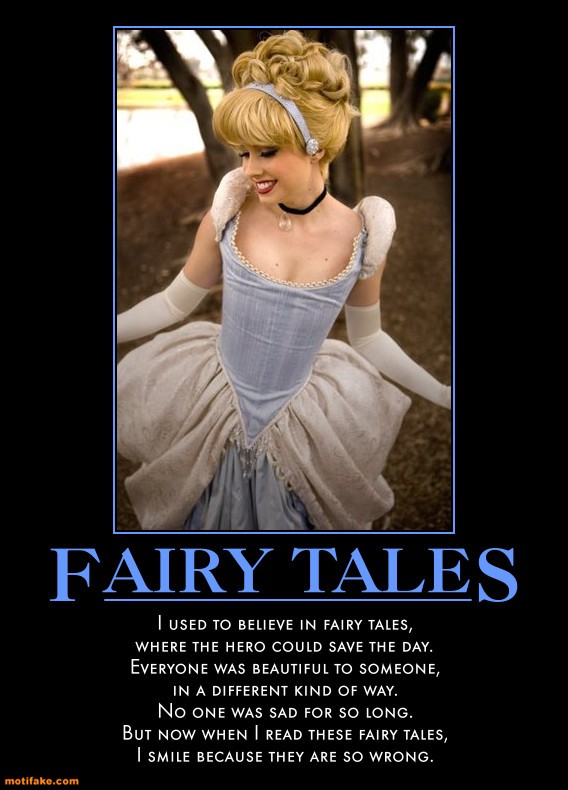 So many girls are raised thinking that the world is perfect and they will grow up to be a princess. I know that when I have my daughter, I’ll probably tell her stories of Persia, Ancient Egypt and Sparta. I don’t really want my daughter to grow up to be a Princess; I want her to grow up to be a Spartan woman. I don’t want to be the father who tells his daughter all of these tales of happy endings, and she gets older only to find out they were all lies. Most of those stories from our youth were great, I think there was some truth to them, but I don’t think it was explained all that well.

“I can remember stories, those things my mother said
She told me fairy tales, before I went to bed
She spoke of happy endings, then tucked me in real tight
She turned my night light on, and kissed my face good night
My mind would fill with visions, of perfect paradise
She told me everything, she said he’d be so nice
He’d ride up on his horse and, take me away one night
I’d be so happy with him, we’d ride clean out of sight
She never said that we would, curse, cry and scream and lie
She never said that maybe, someday he’d say goodbye”
(Anita Baker – Fairy Tales)

I always loved that song as a child.  Now, take for example, Cinderella, Belle, Ariel, Jasmine, Mulan, Pocahontas, and Nala. I’m going to break this down in a way that will relate this to the real world in the most realest way ever.

See Also:  "If Marriage Isn't The Goal, Why Are You Dating Him/Her?"

Cinderella – She lived in a city with mad people. She basically got treated like crap from her family because she was pretty. But Cinderella was one chick in that whole city. That’s the only woman in the city who ended up getting a Prince. Remember the scene at the ball?  How many of those women showed up looking for a Prince and the shoe didn’t fit? Think about that in today’s terms: So many women want a Barack, but there’s only one Michelle out of all those women in the world. That was the same for Cinderella’s story, you can’t possibly think that everyone can find a Prince.

Belle – Many of you know how I feel about “faith-based” relationships. Faith is the belief in things not seen. She had to learn to love a Beast in order to get her Prince. But think about how many women will turn to Gaston because he looks good on paper and miss out on their Prince. Your mother told you that you were a Princess, but she also told you not to bring home any ugly babies. The Beast never had a chance.

Ariel – Ariel had to learn to shut the heck up to get a man.

Jasmine – She was looking for love, and her dad was trying to get $30,000 by getting her casted on Teen Mom. She ended up dating a homeless guy who was convinced he was a Prince. Turns out he was a nice guy, but she had to learn to trust a man with her heart and that’s hard work.

Mulan – She had to pretend to be a man to get a man.

Pocahontas – She had to fight a war and teach white folks (who would later end up killing off all her peoples) to survive.

Nala – Spartan. That’s all you can say, she had to go get her man who had forgotten who he was and ran away from his home. Then she managed to get pregnant on the first night! That’s Spartan.

But you’ve got to ask yourself, are most of the women we know as strong willed as these fairy tale women were? And while we’re thinking about all of this, let’s think about the men.

Cinderella’s Prince – He had to try and slide a glass slipper on a bunch of ratchets and boppers just to find his Princess.

Ariel’s Prince – He had to kill a super-saiyan sea monster to get his Princess.

Aladdin – He had to go into the desert, get a genie, a magic carpet, a parrot and kill a wizard to get with Princess Jasmine.

Simba – He had to go back to the place where his pops was murdered and fight his Uncle, which required him to not only beat a bunch of hyenas, but then he got fire thrown in his eyes.

Ask yourself another question, do you really think the men of today are trying to do all that for their Princess?

Maybe your mother should have told you this when you went to bed at night:

When you get older you’re going to find a man to marry and you’ll get to pick out the best wedding dress in the world. People will come from far to see it. You’ll have to take your dress though. It will be free, you know we love free. It will be beautiful and it will make you look like a Princess. In fact, it will be televised for everyone to see. The whole world will be watching.

But baby? There is only one Vera Wang dress and there’s a nasty b*tch that wants it more than you do. So if you truly want that fairy tale wedding, and you want the best wedding dress in the world, you are going to need to kill that b*tch and take what’s yours. Now get some rest we got work to do in the morning. There’s only room enough for one Princess.

tags: fairy tales Relationships
previous 4 Things Men Don’t Want To See From Women This Summer
next Does a Woman's Relationship with Her Father Affect Her Relationships?