Why Do Women End Most Relationships Before Men?

Last week, I wrote about the fact that black men and women take longer than every other race to get married. What I didn’t touch on in that post is according to a Census Report from 2011, blacks also have the highest divorce rate (see table below). There isn’t a census study on divorce initiations by sex (that I’m aware of) but according to Divorce-Lawyer-Source.com, women initiate the majority of divorces. Based on this site’s figures, divorces initiated by women ranged from 66 percent to “a whopping 90 percent” among college-educated couples. 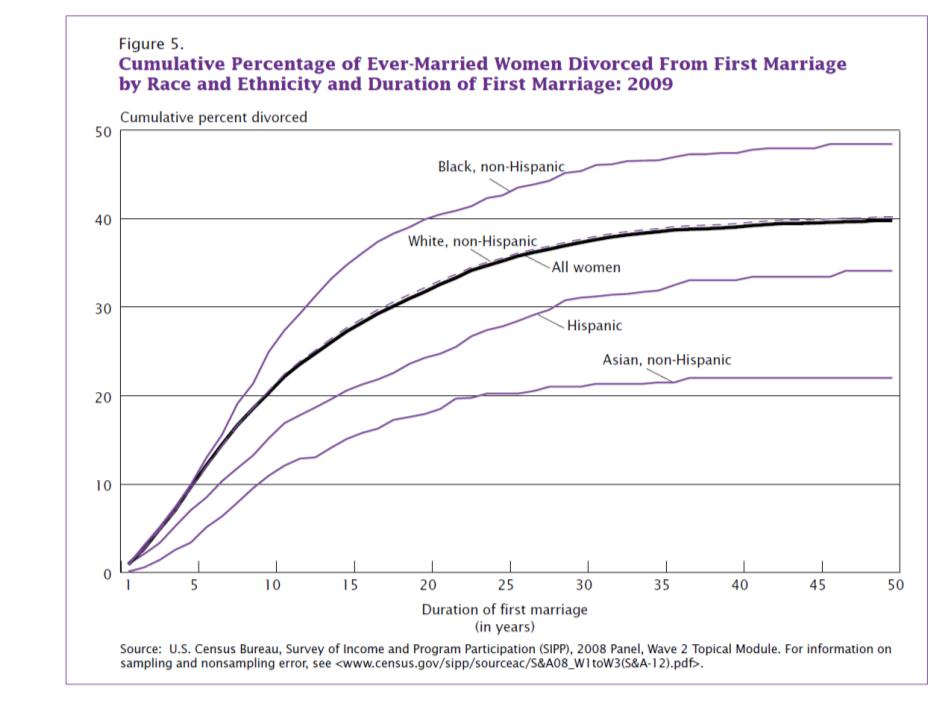 Looking into these figures all started when I came across an article titled, 6 Married Mistakes Women Make that Lead to Divorce. Their top three reasons included:

1. You talk to friends about the rotten thing you think your husband did to you. Research suggests that friends are often more upset when they think their bestie is being mistreated than when they’re experiencing the same mistreatment themselves. Besides, most of us don’t really understand how our conditioning and wiring as women differs from our husbands’ conditioning and wiring as men. That’s why conversations about men with female friends often lead to husband-bashing that helps nobody. The solution is to limit talking about your marital problems to just two people: For example, a trusted friend along with a coach or therapist.

2. You think that talking about these problems with your husband is the answer. All too often, women think that talking to our husbands is the way to make them see how their behavior affects us. If the behavior doesn’t change when we first bring it up, we want to talk more, longer, or louder because we think maybe they didn’t get it the first time. One of the biggest pet peeves for men is that feeling of being nagged or badgered, especially if they don’t know what the problem really is. Also, the rules of polite, kind, nice conversation that women try to follow often come off as indirect, manipulative and mysterious to men. Women often conclude that their husbands don’t care because they haven’t changed after a particular conversation. The solution: learn communication skills designed specifically to talk with men and spend more time doing fun activities.

3. You believe that your happiness depends on your husband changing. Research has shown that happiness does increase when your husband changes for the better, but that change originates with you. Paradoxically, the women who focused on becoming the person they want to be, rather than on how to get their husband to change, were happier down the road. The solution: focus on being the best you.

Most of us have been lead to believe, correctly or incorrectly, that most women want to be married, so I was surprised to find out that women initiate most divorces. I don’t think women randomly end their marriages, so I also looked into the leading cause of divorce. There was no definitive answer but various websites generally agreed on at least three main causes: finances, cheating, and lack of communication or mis-communication.

See Also:  Chicago: A City On The Brink

In my humble opinion, we’ve more than addressed the topic of cheating on SingleBlackMale and contrary to popular belief, more and more studies suggest women cheat just as much as men anyway. Further, unless you’re with someone who lives outside of their means or you’ve married someone who doesn’t make enough money to provide a lifestyle you’re accustom  – which is your own fault – financial difficulties are generally outside of our control. Today, I’d like to focus on the “lack of communication or mis-communication.”

Ironically, the top three reasons noted above all have to do with communication. It’s rare that I’ve met a man (or woman) that didn’t want to make their significant other happy, but somewhere along the way they can’t seem to communicate that simple goal to one another. Somehow they both become convinced that the person they love is hell bent on making their life miserable. However, according to the stats, women are more miserable than men, because they’re the ones initiating the divorces. Before you suggest that this is the consequence of women becoming more financially and educationally independent, you should know that even in 1975, “approximately 72 percent of the divorces in the U.S. were filed by women.”

I’m not sure if men are doing something wrong that they can (or should) improve or if the ideals women have for their vision of relationships, marriage, and husbands is set too high for the average man to realistically achieve. This leads to today’s obvious set of questions…

Why are women more likely to initiate the end of most relationships/marriages? Stated another way, why don’t more men end relationships or initiate divorces?

tags: causes communication divorce finances lead Marriage top Women
previous 7 Things About Women I Learned From Watching My Father
next How Should Women Handle Anger And Arguments With Her Man In Public?