3 Reasons NBA Conspiracy Theorists Need to Have a Seat

Let’s be honest with each other, we have no idea what will happen in Game 6 of the Finals tonight. The gasbags on ESPN and your local sports radio station have all given their guesses, but all we know is Danny Green will continue to be Jesus Christ of the three-point line and Shane Battier will flop like a fish on land. Will LeBron return to his normal efficiency? Will Dwyane Wade be the guy from the first few games, or the last two? Can Manu Ginobili continue to play well?

And perhaps that “not knowing” is what has given a voice to a growing minority among NBA fans: the Conspiracy Theorists. This isn’t a new phenomenon in the NBA. People have, for whatever reason, accused basketball of fixing outcomes more than any other major sport in this country. The Tim Donaghy scandal emboldened those who had assumed the worst about the NBA. Donaghy, an NBA referee at the time, admitted to influencing games to benefit gamblers. He also detailed how the league would assign referees based on their tendencies with the hope of giving a certain team an edge.

Although Donaghy was (by all formal accounts) found to be acting on his own, the rumblings of the Conspiracy Theorists have only grown louder. These Finals are no exception.

See Also:  Sports Is Life: Playing To The Level Of Your Competition

Every rational fan knows that the NBA, like every other league, has outcomes they’d prefer. Some results are better for ratings/ticket sales/sponsorships/money than others. But there’s no way David Stern is fixing the outcome to the Finals according to a script like Vince McMahon of the WWE. Here are three reasons why:

Which owner is signing up to lose? –

Unlike an actual scripted “sport” like pro wrestling, the loser of the Finals has real consequences. Missing out on the chance to hang a banner isn’t the same as giving up a fictitious championship belt. Winning a championship means higher ticket prices, increased sponsorship and local TV revenue, and the other benefits associated with the notoriety of a championship. In other words, serious money directly to the bottom line of the owner. Who is giving that up to benefit David Stern?

For Miami, there’s an even bigger risk. The avalanche of criticism from The Decision and The Pep Rally will start all over again; this time with extra venom from those who wanted this experiment to fail from the beginning. Plus, another season without a championship means any one of Chris Bosh, James, or Wade could be closer to leaving. Again, why would owner Micky Arison agree to take part in this?

The players definitely aren’t going along with a fix. –

The financial benefits of winning a championship are magnetized for the players (who aren’t billionaires). Is there any way Jason Terry of the Boston Celtics gets a $15 million contract without his great play leading to a Finals win? Hell no.

Superstars like James, Wade, Tony Parker, and Tim Duncan are going to make max (or near max) salaries regardless. But Mario Chalmers? He stands to gain a lot of money if he wins another ring. Even if there was a fix, he has no incentive to take part if the script doesn’t have Miami winning at the end. The same goes for a player like Gary Neal on the Spurs.

I know, you think they are paying off the referees. – 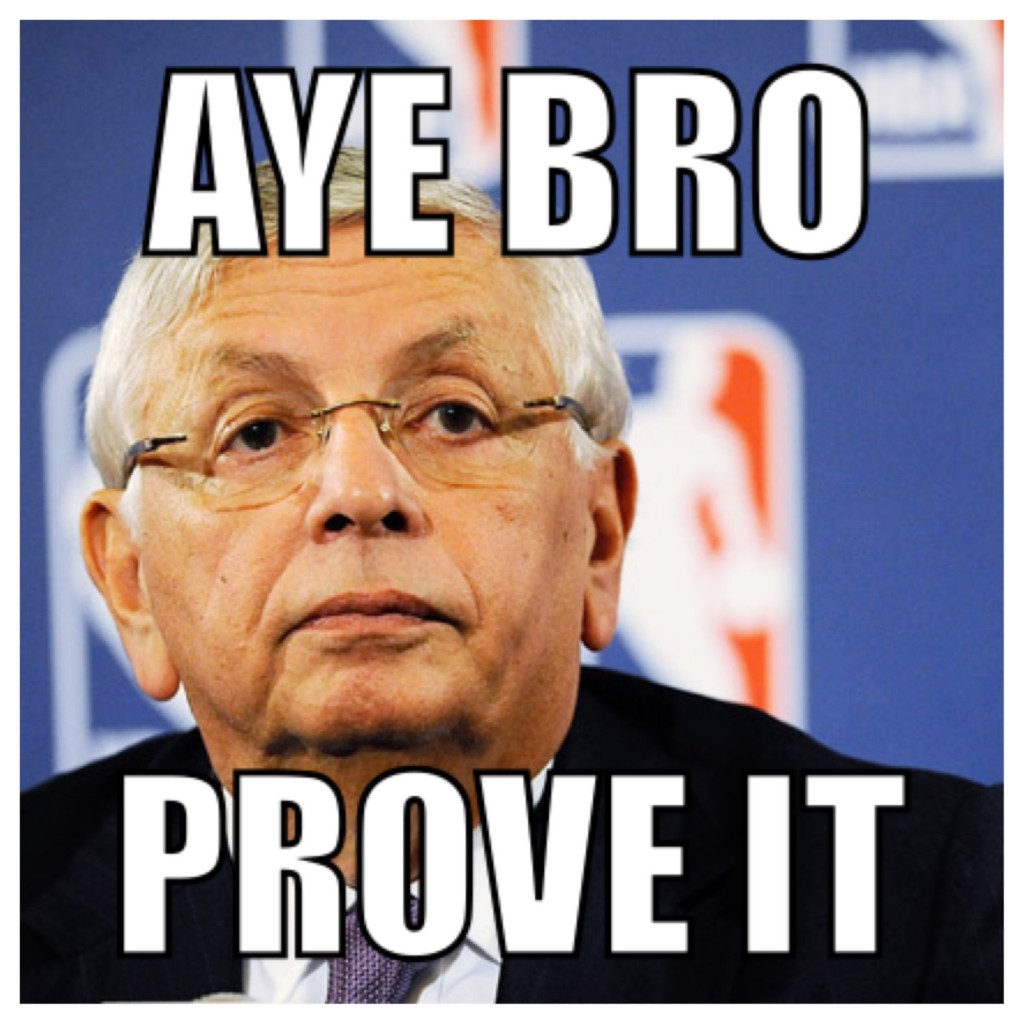 First of all, in the wake of the Donaghy scandal, the league, I’m sure, has no interest in even the appearance of impropriety with its officials. Inviting this risk by telling refs who to “allow” to win is ridiculous, and there’s no guarantee they’d even get it right. Basketball played at this level is difficult. Good shots are hard to come by, and open shots aren’t guaranteed to go in (unless Danny Green is shooting them, I know). Isn’t it much more likely that scheme adjustments and luck are responsible for the outcome of these games, not the refs?

Second, fans of the Spurs and Heat feel like the refs are screwing them. That usually means they are doing a fine job. As a relatively neutral observer, I find generally the same. Even some of the close calls turned out to be correctly judged after looking at replays. Plus, all but one of the games in this series was decided by double digit margins. A couple of calls either way won’t swing the outcome that much. Considering none of the stars in the series have faced serious foul trouble, I don’t think the refs are on the take.–

A good conspiracy theory intrigues me as much as anyone. But it has to be a good theory. The Finals are playing out as they should. Whether the Spurs clinch it tonight or there is a deciding Game 7 on Thursday, rest assured that the NBA had no say in the outcome.

What do you think, SBM Sports Fans? Have I appealed to your logical side? Is David Stern in his office pulling the strings on this series? If so, who’s going to win the series, and why?

Enlighten me in the comments below!