Forever Alone: Nadine Schweigert, Self-Marriage, And The Fear Of Being Single 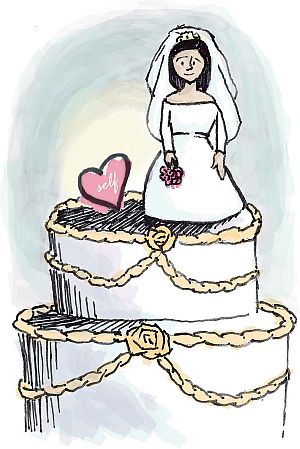 Have women finally reached their breaking point? I asked myself this question, as I read an article from the good folks over at the Huffington Post regarding women who are marrying themselves:

The marriage took place among friends and family who were encouraged to “blow kisses to the world” after she exchanged rings with her “inner groom”, My Fox Phoenix reports.

“I feel very empowered, very happy, very joyous … I want to share that with people, and also the people that were in attendance, it’s a form of accountability,” Nadien Schweigert told Anderson Cooper.

Schweigert said the ceremony was a celebration of how far she’d come since her painful divorce six years ago that led to her two children to decide to live with her ex-husband.

“Six years ago I would’ve handled a problem by going out and drinking,” she said. “I smoked, I was 50 pounds overweight … this is just celebrating how far I’ve come in my life.”

Interestingly enough, this practice isn’t uncommon, as Dennis Rodman (the poster boy of normalcy) once married himself in a famous publicity stunt. Apparently, self-marriages have been very popular as of late. I’m not one to judge, but this seems to be the most pathetic story I’ve read in 2013! People are really out here holding ceremonies for themselves? They took the time to send out an invite to a group of friends, book a venue, and pick out a wedding gown to join themselves in holy matrimony? I wish as an employer my employee requested a day off to witness a self-marriage. They would get Jazzy Jeff’d out of the establishment immediately. Do they have bridesmaids? Did they walk down the aisle to this classic tune:

Seriously, while I understand the thinking behind the ritual (a celebration of overcoming great difficulties relationship wise and acknowledging that you aren’t reliant on companionship to be happy in life), I think a house party, lounge, or other festive outing would suffice. I think that these self-marriage ceremonies speak to a larger issue of people who can’t handle being single. It’s difficult, especially if you’ve gotten out of a long term relationship, to phase back into the single life. Sometimes we forget who we were prior to our relationships, and we think that we are lacking when we are alone. This just isn’t the case.

You have to learn how to love yourself before anyone can love you correctly. Being single isn’t an indictment on you. It’s just a stage in life. If you become a serial clinger, someone who is in and out of relationships as often as you change your underwear, then you will never know how to be emotionally self-sustaining. Those type of people don’t know how to be alone or work on the aspects of their personality that may be a detriment to future relationships. Sometimes you need a break to just be still and reflect! Dating is cool, but it isn’t a requirement. You don’t need companionship to survive, and that mentality is damaging to the mind and spirit.

I think anyone would be lying if they said they never desired to be loved. We all do. It’s a staple of our humanity. No matter how many articles you read on “lonely single women”, there’s nothing wrong with being meticulous and methodical in your selection of a significant other. You don’t have to prove anything to anyone, and you don’t need a ceremony to reaffirm your commitment to self-happiness. These ceremonies come off as desperate, corny, and self-aggrandizing displays of narcissism all at once. I could never see myself with a woman who performs a self-marriage ceremony.

Then again, wouldn’t that be adultery or polygamy?

I can’t call it, maybe you can.

tags: self marriage
previous How Should Women Handle Anger And Arguments With Her Man In Public?
next Technology Assisted Dating