What Do Men Learn About Rape Growing Up? 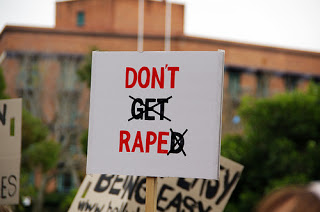 Not too long ago, the Steubenville, OH, rape case met the news feed and men everywhere were asked to teach other men not to rape. I, however, decided that it was an important time to remind women that not all men are predisposed rapists. My dad never had an explicit conversation with me about rape, he only talked to me about using good judgment. As I grew up, I learned the rules and the law but still it came down to where I stood morally. I still stand beside this statement, “I’m one of the men who doesn’t rape women.” I’ve always shied away from women who were intoxicated or under the influence when trying to have sex with them. I didn’t want it that way and there’s a large amount of men who feel the same way.

Growing up, we all are put in positions where we experience situations before lessons are taught. However, I was raised in a home where men didn’t think that just because you saw a short skirt you interpreted that as, “she wants it.” It just doesn’t mean that. If a woman is wearing a revealing outfit it means that is what she decided to wear that night. Nothing more.

It’s also important to point out that men very seldom will have a seat at the table to discuss these topics because it’s not something for men to debate with women. The conversations men have with each other behind closed doors are much more important.

Men talk a big game when around women but when they’re around each other they share their inner thoughts. I tell men all the time, “you don’t have to deal with women who don’t do what you want to do.” I also say you need to know that no woman consents to sex without saying, “yes.” I’m not going to act like there aren’t men who act like a woman who is flirting heavily with them at a party is consenting to that. That happens and I can admit it. But what I can say is that there are a large number of men who do their best to not only avoid situations like that but also share with others how to avoid those situations.

I tell my younger friends that they should shy away from sleeping with women who are intoxicated. They should always obtain explicit consent before crossing that line with women. It’s hard for some to understand but not most. It really boils down to having positive role models. If you see a man who is having luck in his sex life without having to resort to alcohol or drugs, then you’ll likely feel challenged to do the same.

Can men avoid these situations? Yes. Joseph definitely fled Potipher’s residence and that’s a powerful message to share. Sometimes you have to have the power within to say, “This is not how I want it, no matter how much I want it, not like this.” Do women sometimes manipulate men into situations that they may find themselves skating the line? Yes. But as men, if we claim to be in control of our actions we can’t let ourselves lose focus because we’ve had a few drinks or may be under the influence.

Read the conclusion at MadameNoire here.

tags: fatherhood lessons learned rape teaching men not to rape
previous Why You Need to Move on If He's Not Making You Happy
next Men Don't Like Pretty Women