Home Featured A New Twist on an Old Problem: The Friend Zone Should Inspire You to Improve Yourself
Featured
Men's Relationship Advice
July 8, 2013 Guest Post 79

A New Twist on an Old Problem: The Friend Zone Should Inspire You to Improve Yourself 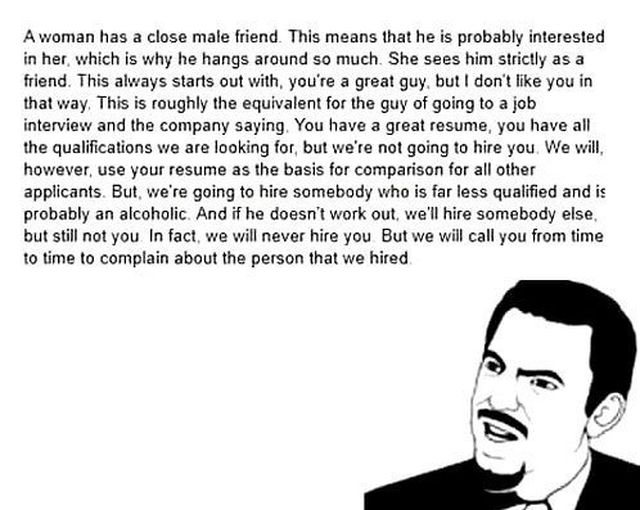 The Friend Zone is the harshest prison on earth. You get imprisoned not for doing anything wrong, but for being who you are. It makes sense then that people take their time there to heart. What people don’t realise is that it shouldn’t be a punishment, but rather an opportunity. It is beyond annoying how much people complain about what should be seen as an indictment of themselves and their peers.  Bear with me as I essentially tell you to stop boring us with your friendship-filled tears, and do something to change the situation.

People are idiots. This is because we are irrational. The difference between ignorance and stupidity is that with ignorance one doesn’t know any better. With stupidity one knows better but doesn’t do better, and this irrationality stems from our natural inclination to base our decisions on our emotions. This is why people often end up with people they shouldn’t have any business associating with. You know this man is fat, ugly, dumb and any other bad adjective you can Google. But hey, he’s popular so now you want to start DM-ing him your BBM pin. You’re an idiot.

She’s shallow, materialistic and uninteresting. Mmmm, but she’s got the most perfect ass you’ve ever seen, so now you’ve caught feelings. You’re an idiot too. But don’t be mad at them for feeling how they feel, be mad at them for acting on it. What people who’ve been friendzoned need to realise is that people can’t help how they feel. You can’t force them to like you back, or force them to stop liking who they like, no matter how recklessly they are behaving.

See Also:  Understanding How HIV Affects Us All

Firstly, you need to make peace with the fact that people like maintaining appearances. Yes she said she wanted a smart, funny and sweet guy, and you’re all those things, but she’s still not giving it to you. That is because she didn’t say he also has to be attractive, rich and/or popular. It doesn’t mean she was lying, it just means that she wasn’t 100% honest. Similarly, a guy saying he wants a smart, strong and independent woman isn’t being completely honest when he omits that she must not make more than him or defy his authority, and must give him sex on command.

It’s difficult for people to be 100% honest in this world because we need to be civil to maintain our social standing. No girl can come out and say that she is a gold digger and expect to maintain friendships. As a friend you must accept that people only list criteria in an ideal and not necessarily practical manner. They say they want those qualities ideally, but life is not necessarily ideal. People are fluid creatures; accept that each situation is different. People desire many qualities in theory, but hearts aren’t known for their rationality.

Next, you must also see where people are coming from. Sometimes people genuinely don’t see their friends in a sexual/relational manner, but a lot of the time it boils down to attraction. Some people must realise that as great as they are as people, that doesn’t necessarily make them attractive. Fine, you’re really funny and nice and everything, but you look like Rick Ross without the Rick Ross money, so now what must happen? There is a very distinct difference between being good-looking and being attractive. You can’t, barring an episode of Dr 90210, change your physical features, but you can improve your level of attractiveness. If you’ve got thousands of jokes but zero sexual charisma, stop trying to bully her into being with you and improve yourself. Go to the gym, buy a GQ, watch Mystery’s show, read a book, WHATEVER DUDE. Just be better. Attraction isn’t necessarily always about looks, often it’s more mental and emotional than anything.

Lastly, you need to wake the f**k up. If you’ve done everything in your power to be the best you can be for this person and they still don’t want you, let it go. When you apply for a job and your application gets denied, you don’t keep going to their office to cry about it. You either work towards improving your résumé and apply again, or you go get another job. If your improved experience and updated résumé doesn’t get you the job, go apply somewhere else. There will always be better jobs and there will always be better people. Ask yourself this: if they can’t recognise how amazing you are, are they really worth your time? Just accept that your friend, as amazing as they may be, is an idiot.

See Also:  What Can We Do To Stop Men Who Don't Pay Child Support?

The Friend Zone should inspire you to improve yourself! If your friend doesn’t want you, you should either let it go and move on to better things, or improve yourself to the point that you cannot be denied. People will always feel how they want to feel and there is nothing you can do to change that, so stop crying about it and just be better. If after all that effort you are still determined to be with them as opposed to someone who recognises you for who you are, then good luck. You are a person after all, and people are idiots.

By Lebo Sibisi (@MrImJustSayin) is an full-time student, freelance writer and full-time cynic. He’s not saying anything, but, you know, he’s just sayin.

tags: Friend Zone Guest Post Lebo Sibisi let it go
previous How Much Does "Experience" Matter To You?
next What Happened to First Dates?