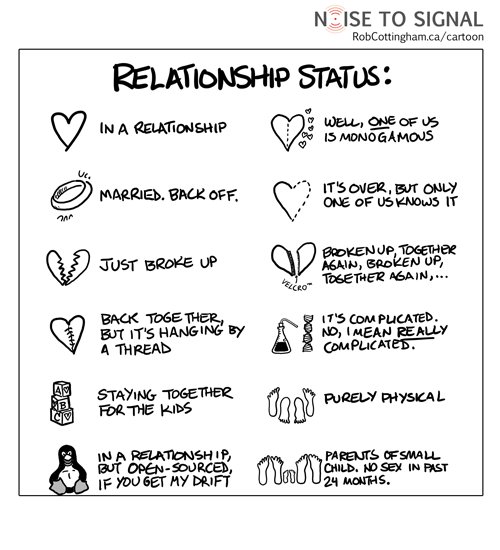 On social media platforms across the internet there is a fine line that is walked daily by people who are dating and/or are in relationships. How much should I share with my timeline/feed about whom I’m dating? Should I say anything at all? All my friends ask me why their facebook status stills says “single” but we’ve been exclusive for three years. That chick stays flirting with him on twitter and she wouldn’t if she knew he was in a relationship. People ask these questions about social media everyday. Some people reading this may have asked similar questions.

There was a point and time where I was hesitant to claim any woman I was dating on social media on a good day to downright denying her on a bad day. There were women I used to date and interact with online and I wouldn’t think about mentioning them as far as being in a relationship. I used to date to this woman while I had an active Myspace account. She wasn’t on any social media at the time. One day while I was perusing my page she noticed that I hadn’t listed that I was in a relationship (to my credit I hadn’t listed that I was single either). She claimed that I was trying to hide her while I maintained that I was only trying to avoid the unnecessary questions and drama that was sure to ensue had I listed myself as in a relationship. She immediately called bullsh*t. Looking back, I can see how she would think that I was trying to swindle her.

I recently had an interesting conversation with a female acquaintance and she happened to mention that she was dating a guy that she stopped interacting with online. She even went as far as to block him on twitter. Her reasoning was that when she first started talking to him there were so many people who would offer their opinion on their relationship. Too many people would watch either his or her interactions with people of the opposite sex and report back like it was any of their business. While I don’t blame her for not wanting random people in her business because that’s the exact reasoning I used in my prior relationship, I realized you cannot live you your life based on how other people might react to what you do.

I’m currently in a relationship and have been for more than a year now. I interact with her online. I follow her on twitter, instagram, facebook and routinely comment on her blog posts so if you follow me on either one of those platforms you probably know who she is. I’ve never had an issue with people trying to get into our business or trying to create drama. This is because there is a limit to what is shared. If you’re worried about what people might say about certain aspects of your relationship then don’t put it out for public consumption. If I were mad at her for whatever reason, I wouldn’t tweet about it because no one needs to know that except for her and I. No one is going to help us work through an argument besides the two of us so why include anyone else?

I understand that everyone’s relationship or situation doesn’t work the same way and some people’s friends/followers are naturally more inclined to engage in messy behavior. In the case of the latter, I would suggest that perhaps you should watch whom you interact with online more closely.  In the case of the former, as long as both people in the relationship are ok with anonymity then that’s all that matters.

Have you had any issues with how much to share about your dating life on social media? How much do you keep private? Have you seen any horror stories or comedies unfold based on people’s dating lives?

tags: anonymity Dating facebook Instagram online twitter
previous What Single People And Free Agency Have In Common
next Why Women Fail To Get Asked On Dates Part II