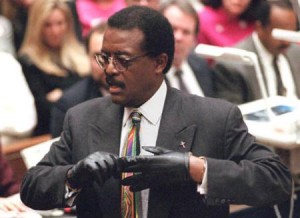 LOS ANGELES, UNITED STATES: Defense lawyer Johnnie Cochran Jr. puts on a gloves 27 September while he addresses the jury during closing arguments during the O.J. Simpson double murder trial. Cochran cited the “defining moment in the trial” as the day prosecutor Christopher Darden asked Simpson to try on the bloody evidence gloves and the defendant told jurors they were to small for his large hands. AFP PHOTO (Photo credit should read Vince Bucci/AFP/Getty Images)