Home Featured Are Men and Women Living too Long for “Until Death Do Us Part”?
Featured
Marriage
July 22, 2013 WisdomIsMisery 25

Are Men and Women Living too Long for “Until Death Do Us Part”? 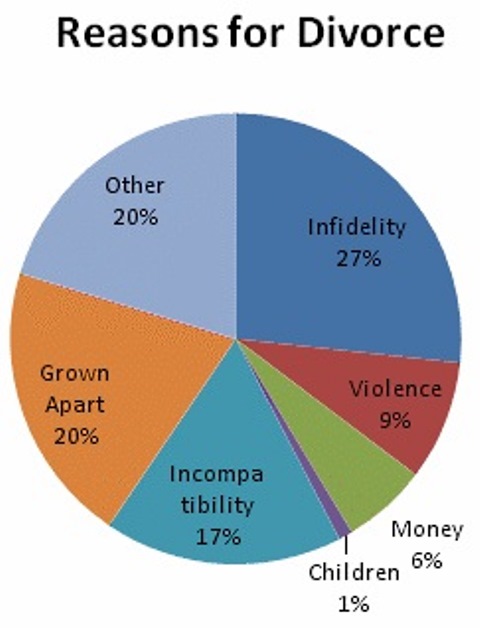 I read an interesting piece the other day on Why Long-Married Couples Split. The piece generally defines “long-married couples” as marriages that end after 20 or more years. A few excerpts from the article :

The AARP Sex, Romance and Relationships Survey on the sexuality of people 45 and older found that extramarital affairs happen for only a relatively small number of couples. So while infidelity is certainly the precipitating factor in some marriages failing, it’s not the reason in most cases.

In most cases, the reasons are far less dramatic. Some relationships have been in decline for decades and finally lose all their juice. A marriage doesn’t usually just blow up. It’s more like a balloon that has been seeping air for a long time. After a while, it’s totally deflated.

The answer is longevity. We live so much longer now. Half a century ago, an unhappy couple in their mid-60s might have stayed together because they thought it wasn’t worth divorcing if they had only a few years left to live. Now, 65-year-olds can easily envision at least 20 more active years — and they don’t want them to be loveless, or full of frustration or disappointment.

I’ve heard and read more and more stories and studies suggesting that a major contributor to the increase in divorce rates in the last couple decades is the fact that people are living longer. A semi-bitter divorced man wrote (paraphrasing), “When the rules of marriage and ‘until death do us part’ were created, we only lived to 30.”

Is it possible that our increasing awareness of relationship options not limited to the confines of a committed relationship due to social media, news, and the Internet as a whole has caused us to invest less and less of ourselves into our immediate, current, and conceivably limited traditional marriages? Although every generation has faced temptation, there has never been a generation of marriages that faced so much readily available temptation. Finding your ex-love or new-love is literally a click away. Even the casually curious may find themselves accidentally connecting with a lost love or new love interest. You can only imagine the success rate of those who actively seek extramarital affairs.

They say the only constant in life is change. Even if two people are legitimately in love in the beginning and agree to be together “forever” with the most noble of intentions, there is nothing guaranteeing they will remain the same. It’s very possible that the two “new” people—sculpted by joint and separate life experiences—may no longer love each other like the two people who met 10, 20, or 30+ years earlier. In his most recent stand-up, recently divorced comedian, Louis C.K. had the following to say about marriage and divorce:

I love being divorced. Every year has been better than the last. That is the only time I can say that [about my life]. By the way, I’m not saying don’t get married. If you meet someone, fall in love, and get married. THEN GET DIVORCED! BECAUSE THAT’S THE BEST PART! IT’S THE BEST PART! Marriage is just like a larvae stage for true happiness, which is divorced. Divorce is forever, it really actually is. Marriage is for how long you can hack it. But divorce just gets stronger, like a piece of oak. No one ever says, ‘Oh my divorce is falling apart. I just can’t take it.’

During the Tiger Woods adultery fiasco, one writer suggested that all marriages should have a 10-year “opt out” clause. Rather than a messy and potentially financially devastating divorce, the two partners could both opt to simply walk away from the marriage at any point after 10 years (for the record, his opinion on child support after this “opt out” point was not covered). Statistically, if a marriage is going to end, there are two periods where it is most likely to occur: the first three years or the 7-year mid-point. In other words, people are most likely to divorce when their marriage is new or when their marriage is (potentially) stale.

Are relationships still meant to last “forever”? Are men and women living too long for “Until Death Do Us Part” to remain a reasonable marriage vow?

tags: average marriage length divorce happily ever after Marriage top reasons for divorce top year for divorce until death do us part
previous Who Got the Hook-up? Wealthy White Guys.
next Late Nights and Early Mornings: Make a Plan Before You Sleep Around