10 Red Flags in Dating: He Might Be a Loser 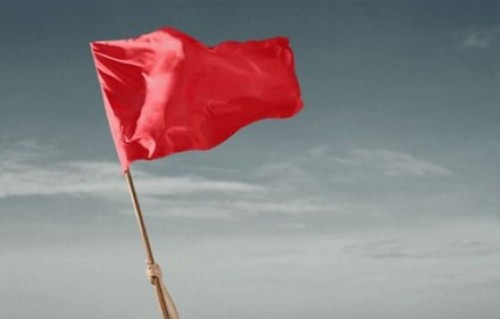 It’s not always easy to spot a diamond in the rough. But sometimes there are undeniable signs that tell you “maybe I should move on to the next guy and leave this loser behind.” Here are 10 red flags that men wave subtlety that you might overlook:

This is big for me as honesty is one of the most important parts of a relationship. In my experience a white lie as seemingly inconsequential as listing a distorted age in an online dating profile can spell bad news if transparency is important to you.

“I’m around this weekend,” the dude text reads.

Oh good God, pick a date and activity already. I had a cognitive psychologist teach me this trick several years ago, and I’ve never looked back. Helps separate the men from the boys, and it’s awesome.

Red Flag #3: He starts critiquing your body, thinking this is a helpful thing to do.

Don’t even get me started. I once had a guy tell me what specific arm-toning exercises he was going to teach me after we slept together for the first time. Lovely.

Red Flag #4: He teases you in a pickup-artist (PUA) negging way, rather than a way that lets you know he has underlying respect for you.

I love to be teased, especially if the person is funny. But I think we are all savvy enough by now to know what a “neg” is. That is, a compliment that really is a dig disguised to make you insecure. Like, “You have the cutest little overbite.” Blargh. I hate this crap. Not only is it cowardly, it’s obnoxious.

Red Flag #5: He can’t make a decision to save his life.

I once did a quick imitation of a dude I went on a date with to a friend of mine about the 10-minute soliloquy my date had given me about what kind of a sandwich he might order — for himself (not me). Her response? “Oh my God, I dated that guy.” Not like, I dated that Everyman Archetype of This Guy. She literally had dated the same guy from Nerve. Which she could tell from my spot imitation I did on the phone. Shudder.

Read the other five at ThoughtCatalog.

See Also:  Why Men Should Enjoy The Holiday Offseason