SBM Sports: Tony Romo is Elite. Deal With It. 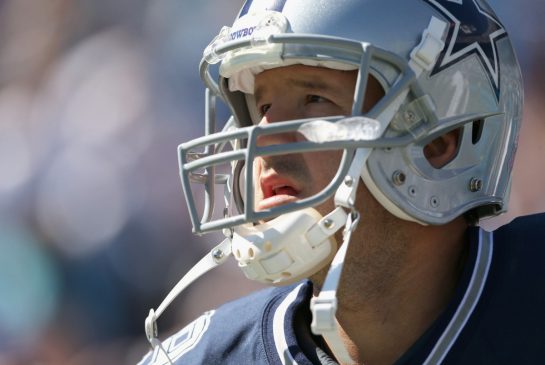 Depending on who you talk to, Tony Romo is either the worst quarterback ever, a good QB who’s incredibly un-clutch, or an All-Pro capable of leading a team to a ring (that’s mostly Cowboys fans).

Before really digging into it, I had Romo rated as a quality fantasy football option, and someone who’s easily meme-able. But what’s the truth? I did some legwork Googling to find out. There’s a lot of Romo hate out there. But looking at the numbers leads you to only one conclusion. First, my rationale:

Romo in the clutch

I know what you’re thinking. Especially because this is the defining play of his career thus far.

That’s hard to overcome. At the time, the Cowboys were down just one point to the Seattle Seahawks in the 2007 playoffs with just 1:19 to play. Romo, the team’s placekick holder fumbled the snap, and the rest is history.

But consider these facts:

Tony Romo is the fifth highest rated passer of all time.

Tony Romo has the highest fourth-quarter passer rating of any active QB.

Here’s where critics will say “those are garbage time stats…that’s how Matt Stafford racked up his numbers.”

I have two rebuttals.

First, screw you for bringing up Matt Stafford. I’m a Lions fan. I know Stafford’s numbers are inflated.

Second, Romo is the second-highest rated active QB when the Cowboys are down or up by seven points or less (Aaron Rodgers is first).

What else do you want when rating the clutchness of a QB?

Let’s take a look at his numbers

Romo racked up 4,903 yards last season. Even if you believe that number is inflated because of the pass-heavy nature of the NFL, you have to give him his due for finishing third overall. Even in a passing league, he’s the third best passer. It’s not like he’s just chucking it all over the field either. He finished fourth in completion percentage (though he did tie Drew Brees for leading the league in interceptions…if he sucks for that, Brees does too).

Even with an injury limiting the team’s top rusher (DeMarco Murray), Romo managed to produce all season. He led the Cowboys to a postseason-deciding game in Week 17, something Eli Manning couldn’t do at that point last season.

What is the beef with a QB who puts up numbers, and does so in the fourth quarter of close games?

That’s why I say, despite his faults, you’re crazy if you don’t rate Romo among the elite at his position.

See Also:  The NFL is (about to be) Back! The 3 Top Training Camp Headlines

Romo falls victim to the same media-driven slander that all great players before him have faced. Critics love to say a player can’t win the big one…until the moment he does. The same was said of LeBron James, Peyton Manning, Alex Rodriguez and more.  Even Magic Johnson was labeled “Tragic Johnson” after winning a ring because of a bad performance in the Finals. Romo’s fellow players buy into this narrative, omitting him from NFL.com’s Top 100 player ranking of 2013.

I don’t know what team you root for, but chances are you’d trade your QB for Tony Romo. The rumors of his ineptitude have been greatly exaggerated.

tags: Dallas Cowboys NFL super bowl Tony Romo
previous 4 Things You Need to Know About Instagram Video
next Tipping in the United States vs. the United Kingdom: Who Gets It Right?