Home Guest Post Tipping in the United States vs. the United Kingdom: Who Gets It Right?
Guest Post
Other Stuff We Like
Rantings
August 13, 2013 Ian Forrester 21

Tipping in the United States vs. the United Kingdom: Who Gets It Right? 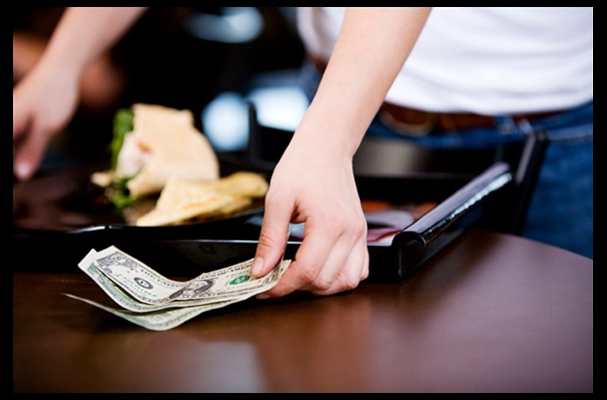 A Cornell professor has written a lot of papers about tipping, with some interesting results for the urban male.

Now I know living in the United Kingdom we don’t tip, anywhere as much as Americans. Not only that, the percentage we tip is far below the scale of the U.S. But I’ve spent a lot of time in the states and understand how much waiters, waitresses, attendants, etc get paid and how they really rely on tips.

However, it’s worth remembering the definition of tipping… Paying a optional gratuity for services rendered

Black customers tend to payless when tipping especially to a black server.

White servers on average are more likely to get a decent tip than a black server.

Tipping is optional in the UK but most people find it customary to pay roughly 10% as a tip unless you really enjoy or hate the service. You also generally only tip at restaurants and bars. Most would be offended if you handed over extra money for a tip when holding a door or doing there job.

In the states, I gather this is not optional but no one will ever return change if you were to over pay your optional fee.

See Also:  We Want Our Community Back: A New Commenting System Is a Start

If you live or travel outside the United States, this entire discussion on leaving a tip in a restaurant might seem ridiculous. Most of the world operates on the simple premise of a service charge or a fixed price, no tip expected.

Parking my slight distaste of compulsory tipping, there is something which feels very unequal about the whole process. Here’s a little experience I had when I was younger living in London.

I worked in a discotheque in Leicester Square (equivalent to Times square in New York) between jobs while studying at university. It was hard going and work ran from 8pm – 4am on the weekend. I was the only male and also the only black in a all European line up. We worked on the bar serving drinks till 3am.

Now I know some of you will say, “well, that’s just about being a man with women.” But I can assure you I was as friendly and flirtatious with the many women who came to the bar as the women bar staff were with the male customers. I got the feeling that even if I had got my kit off and given away extra shots, I wouldn’t have achieved the £140 mark on a single night.

On reflection, being reliant on tips sucks (yeah I said it) and before you say compulsory tipping would solve the problem. No, it wouldn’t and won’t. In the UK there is a minimum wage, so everyone was being paid that at least. I won’t even touch on minimum wage because I understand that’s a very hot issue there. If I had not been paid the minimum wage, I would have been down a river without a paddle (aka royally screwed).

Another thing which comes out of the boat load of studies, is the fact countries with compulsory tips are more likely to be corrupt. Now I wouldn’t dare come on Single Black Male and call the United States corrupt. That would surely get me banned from writing here ever again, but you have to wonder right? Before you hit the comments with hate, have a word with Transparency International.

So what do you guys think? Hit the comments…

See Also:  10 Secrets To Showing Him You Love Him