SBM Sports: Why the Packers Will Win the Super Bowl in 2013 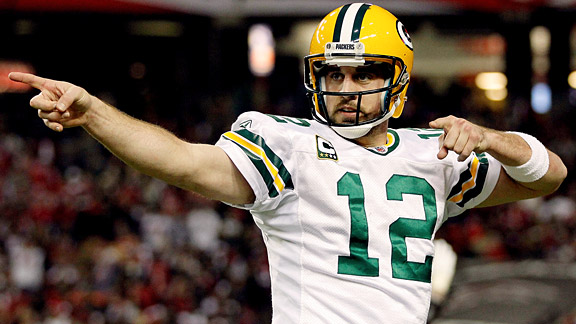 Since I’ll be in Santorini, Greece next week celebrating my honeymoon (joining the ranks of the married men of SingleBlackMale), I’ll give my prediction for the 2013 NFL season a week early.

This isn’t a “Why [Your Team] Sucks” post, Deadspin.com does a great job with those already. Instead, this is why I think the Green Bay Packers will be hoisting their 2nd Lombardi Trophy come February in The Meadowlands (more on why that’s a dumb place to have a Super Bowl in the coming months).

I’m aware that it’s ridiculous to make a credible prediction before the season starts. There are (theoretically) 31 teams, each with an even shot at winning it all this year. There are also the Jets. But what’s the fun in being a wet blanket? Here are my reasons for believing in the Packers:

Apparently everyone forgot how good Rodgers is at some point over the offseason.

In an increasingly pass-heavy league, there has been a natural emergence of quarterbacks with gaudy passing stats. With more guys putting up huge stats, the dance floor has become a sausage fest for so-called elite level QB’s. I argued (unsuccessfully) for Tony Romo’s inclusion among those guys here.

Maybe people are bored discussing Rodgers’ mastery of the position. Maybe it’s more fun to talk about the young QB’s who are coming into their own (Kaepernick, RG3, Luck, etc.). I don’t know. I do know that all these guys are trying to become what Rodgers already is.

The same thing happened to New York rap a few years ago. People seemed eager to hand the King of New York title to everyone not named Jay-Z as a crop of young guys started to gain a buzz. Turned out there were a lot more Papooses than legit contenders, and Jay Z (no hyphen) went platinum before his release in 2013.

No idea how Kendrick Lamar factors into this metaphor, but you get what I’m saying.

This story was somewhat under the radar last season as most NFL fans focused on the sexier headlines throughout the year. The Packers were decimated most of last season, especially on defense. Football Outsiders, the smartest analysts in football, have a fancy stat proving that last year’s Packers were one of the most injured teams of all time and they still made the playoffs.

With everyone healthy and ready to go this season, they are in position to make a deep run in the playoffs.

The Packers’ relative success despite all those injuries shows the overall stability of the team. They have smart people in the front office and coaching staff, and with a healthy roster on deck, they will be as dangerous as ever headed into this season.

The NFC North ain’t there yet –

Despite improvements, the Packers are still clearly ahead of their division. Every other team has hurdles to get over before they can legitimately challenge Green Bay. The Lions have decades of ineptitude and a shaky secondary. The Vikings have Christian Ponder. The Bears have a new coach and Cutler’s inability to throw to anyone except Brandon Marshall to overcome. Do you trust any of them to put it together over the course of this season? The Bears have the best shot, but I think they’re a year away.

In reality, only the Seahawks, 49ers, and maaaaaybe the Giants have a real shot to threaten Green Bay in the NFC. The playoffs won’t be a cakewalk by any means, but Green Bay should be in control with home-field advantage come December. As the numbers show, Green Bay is a tough place to win in the postseason. I like their odds.

That’s my breakdown of the Packers’ chances going into this season. What do you think? Do they have enough to win it all? If not, who ya got taking the title this season? Hit the comments and let me know.

Football is back everybody!