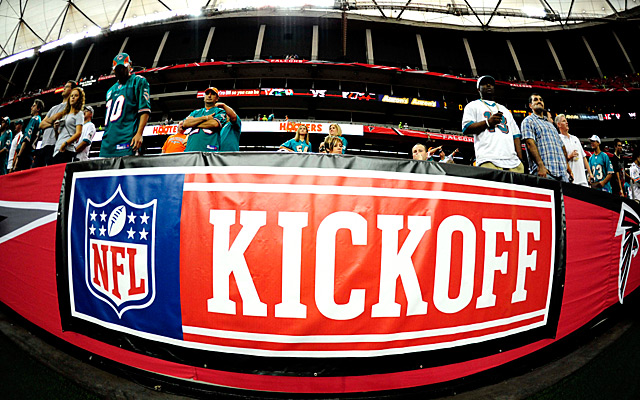 America’s obsession returns on Thursday night with the Baltimore Ravens meeting the Denver Broncos in the NFL’s season opener in Denver. By now, you’ve probably seen 4,700 “experts” and “insiders” make 6.7 million predictions on TV, radio, and the Web about who will do well this season, who won’t do so well and why. Well, I’m not (necessarily) an “expert,” and I’m certainly no “insider.” However, that won’t stop me from having an opinion, and since Joe Sargent is enjoying baklava somewhere on the Mediterranean Sea, the thousands of SBM’s readers are (for now) stuck with my humble opinions.

Here are 32 “bold” predictions for each NFL team this season. Why “bold” in quotation marks? Well, honestly, some of them aren’t that bold (see: Jets, New York). At the same time, most (if not all) of the predictions have real possibilities of occurring (especially the ones involving the unemployment line). Of course, if I’m wrong, you can call me dumb, stupid, clueless, etc. It’s OK, though. In the picture below you can see how many phux I will give at that point.

(Of course, if (and when) I hit on two-thirds of these predictions, sheeeeeeeeeit).

I will start in alphabetical order by conference, which (not so) coincidentally bring us to the defending Super Bowl champions…

The Baltimore Ravens will have a winning record this season.
If you haven’t realized by now, I ride out for the boys in Baltimore. (Why? Long story. Buy me a beer and I’ll tell you.) All offseason, I’ve heard from friends, Romans and countrymen about how we’ve lost our entire team and how much we’re going to suck this year. Well, if losing…

marked the end of our franchise, then you don’t really understand how player acquisition works in the NFL (yeah I said it). There are certain teams in this league(Ravens, Steelers, Patriots, Giants, to name a few) that know when to cut cords with certain players. As I have said for years… when these franchises let a player go, that should tell you something. At least nine wins this year for the Ravens, write it down.

(I promise you… that will be the longest explanation in this piece.)

The Buffalo Bills will have the Offensive Rookie of the Year in E.J. Manuel.
I see a lot of Robert Griffin-like potential with Manuel, playing for an offensive-minded coach (Doug Marrone, who was the offensive coordinator for the Saints under Sean Payton from 2006-2008) who liked to run some read option at Syracuse but didn’t necessarily have the QB. Unlike Griffin, at 6’5” and 237 pounds, he’ll be less likely to get beat up than Griffin.

The Cincinnati Bengals will win the AFC North… and lose their first playoff game, again.
This prediction is totally predicated on Andy Dalton’s success this year. I think he’s just about reached his ceiling, and in this league, you go as far as your quarterback takes you. Having a top-ten defense (maybe even top-five), a top-three wide receiver in A.J. Green and a solid running game (The Law Firm & rookie Gio Bernard) doesn’t matter if your QB does this when you really don’t need him not to.

The Cleveland Browns will finish last in the toughest division in football.
They’ll be better than 5-11, but I don’t think the moves they made this season will matter that much. Remember the outside linebacker that wanted $40 million from the Ravens? His name is Paul Kruger, and the Browns gave him that contract. 7-9 tops for Cleveland, which will give Browns fans hope for 2014.

The Denver Broncos will not progress any farther in the playoffs than they did last season.
It’s easy to think that the Broncos would have won the Super Bowl if it weren’t for this play. It’s smarter to remember that Peyton Manning had four drives in overtime against Baltimore to get three points for the win… and couldn’t. Regular season Peyton Manning is unfuckwitable. Postseason Peyton Manning (aka Mr. 9-10) has a tendency to leave something to be desired.
The Houston Texans will get to the AFC Championship Game.
Always the bridesmaid, never the bride. Then again, when you treat regular season games like high school homecoming, maybe you deserve to be the bridesmaid. If you’re a Texans fan, you see the Ravens retooling, the Patriots losing 93% of their offense, the Steelers looking shaky, and you have to think this is your best chance to get to the Super Bowl. It may also be your last.

See Also:  Why Teaching Men Not To Rape Isn't Going To Cut It Either

The Indianapolis Colts will be this year’s Detroit Lions.
If you’re waiting to crown Andrew Luck as a top-five quarterback, you’re going to keep waiting beyond this season. As Grantland’s Bill Barnwell has stated repeatedly, their record in games decided by a TD or less last year was a remarkable 9-1 (as a comparison, the Patriots were 4-4), and they allowed more points than they scored. I haven’t seen any major upgrades defensively (besides having Chuck Pagano for a full season this year). Maybe not 4-12, but this is screaming 6-10.

The Jacksonville Jaguars will be starting Ricky Stanzi by Week 13.
This is less about how much I believe in Ricky Stanzi but about how confident I am that Blaine Gabbert is the worst starting quarterback in the NFL. How is Ryan Tannehil, a guy who led Texas A&M in receptions in 2009, already a better quarterback than you?

The Kansas City Chiefs will win the AFC West.
My first really, really bold prediction. In 2010, with a new offensive philosophy, the Chiefs surprised everyone and won the AFC West. This year, they have a brand new offense, a far better coach (Andy Reid >>>>> Romeo Crennel) and four Pro Bowlers on defense. I called this in 2010 (ask @TheRealCousinD & @MidtownMo), and I’m calling it again.

The Miami Dolphins will regret paying Mike Wallace by November.
Similar to the Ravens, when the Steelers let a player go, that should tell you something. There’s a reason why the Steelers paid Antonio Brown and not Mike Wallace. When Mike Wallace isn’t getting behind defenses on deep routes like he used to against all the bad teams… he’s an above-average to good receiver. You don’t pay good receivers $60 million.

The New England Patriots will win the AFC East again… and that’s it.
I’ll give New England credit for this: they thoroughly beat up the teams they’re supposed to beat… and it gets everyone in a tizzy to make them Super Bowl favorites by Week 12. Meanwhile, since the 18-1 season in 2007, here’s how their season has ended:

See Also:  Sports Is Life: Playing To The Level Of Your Competition

Yeah, they’ll probably roll through their division and get to 12 wins, but this team doesn’t scare me anymore in the playoffs, nor should it scare you.

The Oakland Raiders will have a top 10 QB… in fantasy football in Terrelle Pryor.
However, that’s only in standard scoring… and that’s the best thing Raiders fans will have this season.

The Pittsburgh Steelers will not make the playoffs. Again.
Yes, I’m a Ravens fan, but I try to be objective. I don’t think the Steelers will stink. Nevertheless, I’m hearing a lot of, “The Steelers will bounce back this year because… they’re the Steelers.” Well, being “the Steelers” the last two seasons has equaled no offensive line and making this guy a playoff legend. They’re a first-class organization and they do things the right way. But remember, I said the AFC North would be the toughest division in football this year. Not having Cincy & Cleveland to beat up on will make things rougher than usual in 2013.

The San Diego Chargers will finish last in the AFC West.
Last year, I took Philip Rivers in the fourth round of my big money league fantasy draft, thinking he’d have a bounce back season. After this game, I started heavily scouring the waiver wire. Remember when the Chargers used to be the most talented team in football? I swear they’ve never recovered after this game.

The Tennessee Titans will finish second in the AFC South, prolonging their foolish thinking that they possibly have a franchise quarterback.
The last time Jake Locker had a completion percentage above 60 percent was his junior season… of high school. (As a comparison, Tim Tebow’s lowest completion percentage in college was 64.4 percent) Yet somehow, he was the No. 8 pick in the 2011 draft, a draft full of teams reaching for “franchise” QB’s. And like many of those teams, they’ll be looking for a new QB soon.

William H. Strafe writes & podcasts about sports and entertainment for seveneighteen, which has been bringing up the rear since 2009.