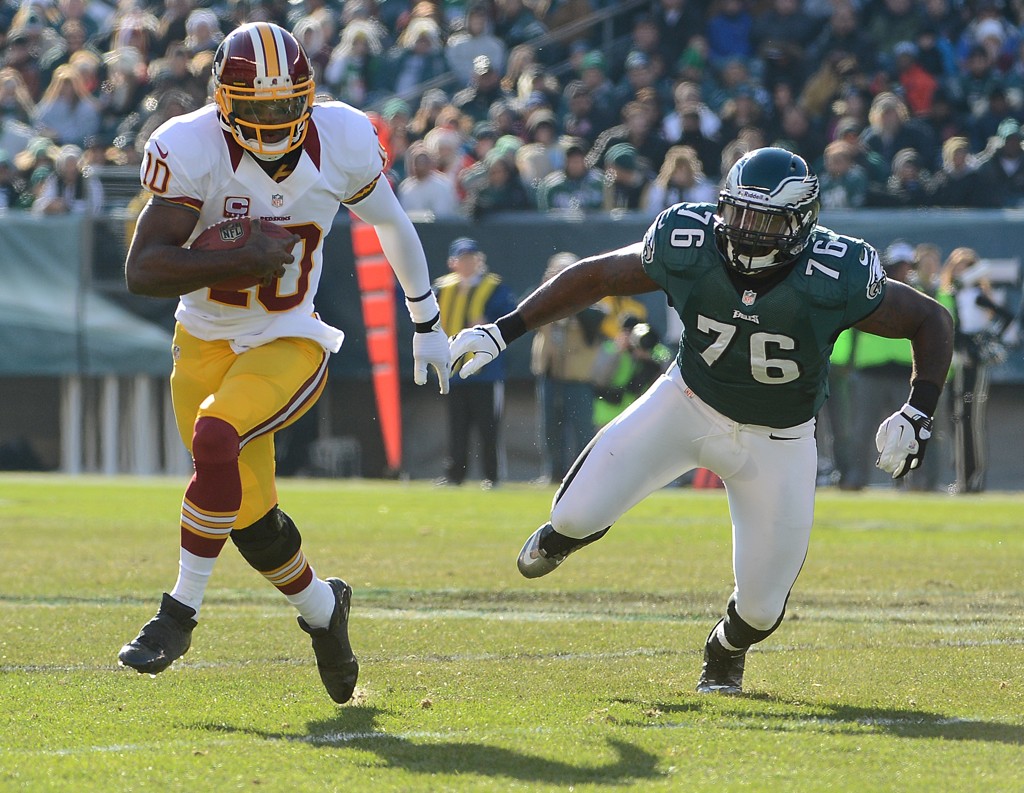 Welcome to Part 2 of SBM’s Bold Predictions for all 32 NFL teams. If you missed Part 1, where we covered the AFC, click here. Today, we’ll cover the NFC, which has a LOT of good teams. Green Bay, Seattle, San Francisco, Atlanta… when in the hell did the NFC get this good? You know how good the NFC is? The first team on our list went 5-11 but could make the playoffs next year.

The Arizona Cardinals will not have a losing record this season.
They went 5-11 last year with me starting at QB. (Seriously. It was me. And I was turrrrible.) Defensively they were very good. Offensively, there’s nowhere to go but up. I’m not saying that Carson Palmer is going to be the reincarnation of Kurt Warner, but new head coach Bruce Arians loves to chuck the ball around (ask Andrew Luck). Speaking of chucking the ball around…

The Atlanta Falcons will be the new Greatest Show of Turf this year.
Ever since Aaron Rodygers came through and crushed the buildings in Atlanta three seasons ago, the Falcons have been building their aerial assault to be the new Greatest Show on Turf. (Roddy White even said so on ESPN’s Fantasy Focus football podcast in 2011.) I liked their move in that direction, but they didn’t have Marshall Faulk, nor could Michael Turner play him on TV. Steven Jackson can come close though. This year, Atlanta is at a playoff crossroads similar to Houston… if not now, when?

The Carolina Panthers will have one of the five best defenses in the NFL.
Slightly biased opinion: In the third preseason game (read: the game where the starters play the most), the Panthers forced four turnovers and scored four times on defense and special teams against the Ravens. Very unbiased opinion: that front seven has been getting better every year and will maul people this season. Cam Newton, you now have one less excuse to get the job done.

The Chicago Bears will have a big decision to make after Jay Cutler plays JUST well enough to deserve a new contract.
Cutler finds himself in the same position Joe Flacco found himself in a year ago: a QB considered middle-tier in the last year of his contract. I don’t see the Bears sniffing anything close to the Super Bowl this year, but Cutler will do just enough (say, 4,000 yards, 27 TD’s and 13 INT’s) to be able to say, “Who else you gonna sign? Tavaris Jackson? Matt Leinart?”

Or he could try too hard all season and throw 25 interceptions. Anything is possible with Jay Cutler.

The Dallas Cowboys will be coached by Bill Callahan on Thanksgiving Day.
The rumblings will begin after they lose by three TD’s to the Chiefs in Week 2 in ARROWHEAD to drop to 0-2. After temporarily righting the ship by beating the Rams and Chargers, the Cowboys will lose three of these next four games: Broncos, Redskins, at Eagles, at Lions. At 3-5, the rumblings will get louder. A win against Minnesota will only be a stay of execution until the Cowboys get destroyed in the Superdome by the New Orleans Lannisters (more on them later) on Nov. 10. The upcoming bye week gives Jerry Jones an easy opportunity to end the Jason Garrett Era in Dallas.

The Detroit Lions will have the Defensive Rookie of the Year in Ziggy Ansah.
When you think of Detroit, defense usually doesn’t come to mind. But Ziggy Ansah reminds me of Jason Pierre-Paul in the sense that he started playing football hella late but has all the tools to be a premier pass rusher. Playing alongside Nick Fairley and Ndomakung Suh also helps.

The Green Bay Packers will win the NFC North by simply rolling out of bed.
This is Green Bay’s division to lose, period. Not that the division stinks, but they’re just better than everyone else… starting at quarterback.

The Minnesota Vikings will be starting McLeod Bethel-Thompson by Week 15.
Similar to the Ricky Stanzi Corollary in Jacksonville, this is less about the QB from Sacramento State and more about the QB from Florida State, Christian Ponder. In yesterday’s post, I mentioned that at No. 8, Jake Locker went way too early in the 2011 NFL Draft because teams were delirious with franchise QB angst. Guess who undeservedly went four spots later?

The New Orleans Saints will have the NFL’s Most Valuable Player in Drew Brees.
If you watch Game of Thrones (I finished all three seasons in ten days and it was fucking awesome!), you know that a Lannister always pays his debts… before cutting someone’s head off. The Saints will be in full-blown Lannister mode all season. Sean Payton is going to introduce scoreboard run-uppage like you haven’t seen since the ’07 Pats… and Drew Brees will be the beneficiary.

Too bad their defense will still stink because they hired overrated-ass Rob Ryan as defensive coordinator.

(Quick tangent: I swear the only reason Rob Ryan has a job is because he’s a defensive coordinator with the last name Ryan. If his name was Rob Jones, he’d be coaching in Winnipeg or something. If he was so good, how come this is his FOURTH job as a defensive coordinator? You don’t see Dick LeBeau bouncing from team to team like this guy.)

The New York Giants will win the NFC East.
They have the best ownership, the best GM, the best coach and the best quarterback in the division. (Cut to the pissed-off Redskins fans screaming something about a quarterback who’s never won anything and is eight months removed from watching his knee turn in the wrong direction.) When in doubt about the NFC East, choose the Giants.

The Philadelphia Eagles will have a bona-fide MVP candidate in Michael Vick.
Remember how Andy Reid elevated Michael Vick to Bo Jackson Tecmo Bowl-like status in 2010? (I know the Redskins fans do.) Chip Kelly’s offense has Fuckwithmeyouknowigotit written all over it. Don’t be surprised if Philly makes the playoffs this season.

The San Francisco 49ers will take a step back this year.
Can you name the Niners’ receiving corps this year? (No, Michael Crabtree doesn’t count, he tore his Achilles in mini-camp.) Teams also have had a full summer to study Colin Kaepernick on tape. (Hell, you saw what the Ravens did last year when they had two weeks to prepare. Damn that blackout for making the game close.) They’ll still make the playoffs, but won’t have a home game this year.

The Seattle Seahawks will host the NFC Championship Game.
I went back and forth between Seattle and Atlanta as the top seed in the conference. I decided on the Seahawks due to their massive home field advantage at Qwest Field. (I don’t care what it’s called now, it’s Qwest Field, period.) The Seahawks actually go to Atlanta in Week 10, and the winner of that will probably be the top seed. Either way, Russell, Beast Mode and that defense will be formidable opponents this year, to say the least.

The St. Louis Rams will realize that Sam Bradford is not their franchise quarterback.
You know how we (well, more you than me) always assume that young quarterbacks that are frisky in their first year or two will take the next step the following year? Since losing the division to Charlie Whitehurst (!!!) and the 7-9 Seahawks in Week 17 in 2010, the Rams are 9-22-1 with Bradford at the helm. Jeff Fisher is an excellent coach, but he’s only going as far as Bradford takes him… and that won’t be very far.

The Tampa Bay Buccaneers will finish last in the second-toughest division in football.
Josh Freeman has all of two more wins than Sam Bradford does (he’s 11-21). Bucs fans are hoping that the return of Carl Nicks and Davin Joseph to the offensive line will help Freeman rediscover the magic that led them to a 10-6 record in 2010. Those guards will be really helpful… in keeping Mike Glennon off the turf when he takes Freeman’s job in mid-season

The Washington Redskins will find some way to screw this season up.
Their owner sounds like Governor George Wallace. Their general manager is merely a figurehead for the real general manager, the head coach. Their head coach thought it was advantageous to keep his franchise QB in the game after seeing him do this (fast-forward to 3:36). Their franchise QB says publicly he didn’t like the fact that the head coach kept him out all preseason. The team doctor says the coach shouldn’t run certain plays for the franchise QB in order to prevent injury.

Ladies and gentlemen… your 2013 Washington Redskins!

William H. Strafe writes & podcasts about sports and entertainment for seveneighteen, which has been bringing up the rear since 2009.

tags: nfc NFL nfl preview
previous SBM's Bold Predictions For All 32 NFL Teams, Part 1
next Men Don't Have It All Either