Men Don’t Have It All Either 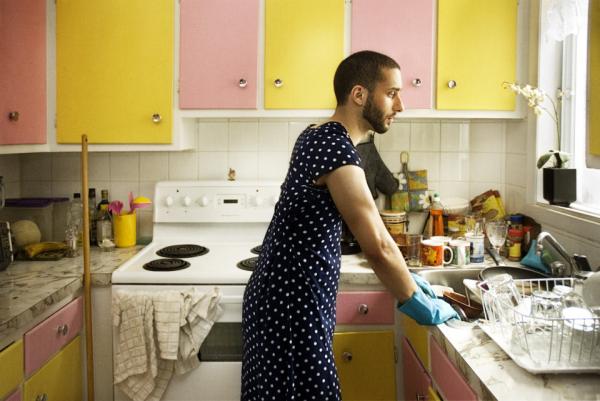 The baby has a heartbeat. The ultrasound shows ten fuzzy fingers and ten fuzzy toes and a tiny crescent-moon mouth that will soon let out the first of many wails. We have chosen not to find out the gender, and when the question comes, as it does every day, we say we have no preference. Ten fingers, ten toes. A wail in the delivery room would be nice. But in private, just us, we talk. About the pros and cons of boys versus girls, and about whether it would be better, more advantageous, to be born a boy or a girl right now. It’s a toss-up, or maybe just a draw — impossible to say that a boy or a girl born in America in 2013 has any conspicuous advantages because of his or her gender.

Consider the facts: Nearly 60 percent of the bachelor’s degrees in this country today go to women. Same number for graduate degrees. There are about as many women in the workforce as men, and according to Hanna Rosin’s 2012 book, The End of Men, of the fifteen professions projected to grow the fastest over the coming years, twelve are currently dominated by women. Per a 2010 study by James Chung of Reach Advisors, unmarried childless women under thirty and with full-time jobs earn 8 percent more than their male peers in 147 out of 150 of the largest U. S. cities. The accomplishments that underlie those numbers are real and world-historic, and through the grueling work of generations of women, men and women are as equal as they have ever been. Adding to that the greater male predisposition to ADHD, alcoholism, and drug abuse, women have nothing but momentum coming out of young adulthood — the big mo! — and then…

Well, what exactly? Why don’t women hold more than 15 percent of Fortune 500 executive-officer positions in America? Why are they stalled below 20 percent of Congress? Why does the average woman earn only seventy-seven pennies for every dollar made by the average man? Childbirth plays a role, knocking ambitious women off their professional stride for months (if not years) at a time while their male peers go chug-chug-chugging along, but then why do some women still make it to the top while others fall by the wayside? Institutional sexism and pay discrimination are still ugly realities, but with the millions in annual penalties levied on offending businesses (and the attendant PR shitstorms), they have become increasingly, and thankfully, uncommon. College majors count (women still dominate education, men engineering), as do career choices, yet none of these on their own explains why the opportunity gap between the sexes has all but closed yet a stark achievement gap persists.

For a fuller explanation, the national conversation of late has settled on a single issue — work-life balance — with two voices in particular dominating: The first belongs to former State Department policy chief Anne-Marie Slaughter, whose essay “Why Women Still Can’t Have It All” was the most widely read story ever on The Atlantic‘s Web site and landed her a book deal and spots on Today and Colbert.Slaughter’s twelve-thousand-word story relies on personal anecdotes mixed with wonk talk: “I still strongly believe that women can ‘have it all’ (and that men can too). I believe that we can ‘have it all at the same time.’ But not today, not with the way America’s economy and society are currently structured.” The scarcity of female leaders to effect public and corporate change on behalf of women; the inflexibility of the traditional workday; the prevalence of what she calls ” ‘time macho’ — a relentless competition to work harder, stay later, pull more all-nighters, travel around the world and bill the extra hours that the international date line affords you.” All these factors conspire to deprive women of “it all.” (The “it” in question being like Potter Stewart’s definition of pornography: You know it when you have it.)

According to a study released in March by the Pew Research Center, household setups like ours are increasingly the norm: 60 percent of two-parent homes with kids under the age of eighteen are made up of dual-earning couples (i.e., two working parents). On any given week in such a home, women put in more time than men doing housework (sixteen hours to nine) and more time with child care (twelve to seven). These statistics provoke outrage among the “fair share” crowd, and there is a sense, even among the most privileged women, that they are getting a raw deal. (In April, Michelle Obama referred to herself as a “single mother” before clarifying: “I shouldn’t say single — as a busy mother, sometimes, you know, when you’ve got a husband who is president, it can feel a little single.” Because really: The president should spend more time making sure the First Lady feels supported.)

But the complete picture reveals a more complex and equitable reality.

Men in dual-income couples work outside the home eleven more hours a week than their working wives or partners do (forty-two to thirty-one), and when you look at the total weekly workload, including paid work outside the home and unpaid work inside the home, men and women are putting in roughly the same number of hours: fifty-eight hours for men and fifty-nine for women.

Read the full article at [Esquire.com]

Will boys born in 2013 continue to hold an advantage over girls or has society reached equilibrium?  Will the current generation’s children face equal opportunities and competition regardless of sex? Is this the vision of equality most imagined? What else needs to change?

See Also:  Does A Man's Credit Score Really Define Him?

tags: blackpowerisforblackmen equality Men men have it all Women women cant have it all
previous SBM’s Bold Predictions For All 32 NFL Teams, Part 2
next Maybe Most Women Don't Really Want Equality