How Black Sexuality is Viewed in America 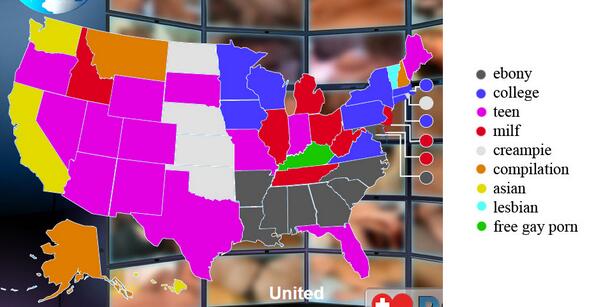 This picture is worth way more than 1,000 words.

Last week, the above map was retweeted onto my TL.  It claims to show the most searched “sex terms” by region. Later in the week, Russell Simmons released a spoof of a sextape featuring Harriet Tubman.  Most people who’ve viewed the tape took umbrage with it.  Yet, the map and sextape showing up in the same week was coincidental.

All the states are in the south and have a higher rate of black residents than the other regions of the country.  This would explain a portion of the findings.  However, many of the same states have an extremely dubious history, from slavery to Jim Crow.  Slavery was, and remains, a horrific chapter in this country’s history.  We’re still (arguably) dealing with the lasting mental and generational issues that stem from it.  One of the horrors was the rampant and systemic abuse heaped upon the slaves; this includes sexual abuse.

See Also:  Is the Internet Creating a New Generation of Racist?

Since slaves had no control of their bodies, their owners could do whatever they saw fit.  This led to a fetishized view of the black body, where the “Mandingo negro” and the “insatiable negress” archetypes find their root.  These archetypes carried over from slavery right on through the 21st century.  The stories of Rosewood and Emmitt Till explain why the Mandingo was, and still is, viewed with both fear and reverence.  The Sally Hemmings/Thomas Jefferson story is a twisted example of the insatiable negress.  Today, when Billy Jo and Beth Ann want to satiate their lust without having to actually touch a black body, what means is available to them?  Porn.

It’s a shame that after all these years, this nation has an institutional aversion to the black body, and black sexuality.  It’s taboo.  No division is made between heterosexuality and homosexuality either.  America wants to control it and look at it, but not acknowledge it as part of *us*, the same way it doesn’t want to give credence to our humanity, 3/5th compromise be damned.

See Also:  So Don't You Fall In Love: A Thesis for Emotionally Unavailable Men

We do this nation no favors by exploiting our own, both men and women.  Our community really should examine how the historical views of  black sexuality have impacted how we act toward one another and see our bodies.  At some point, the admittedly corny but true notion that “black is beautiful” should be something we take pride in; not just a slogan for a television network.

This video is @chescaleigh‘s views on the Harriet Tubman sextape.

How do you feel about black sexuality, and how it’s viewed in America?  How much of an impact do you think the past has on how society views it?  Will society’s views ever change?