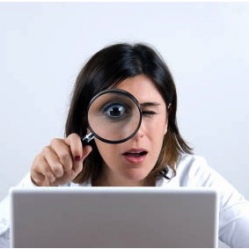 With the release of the iPhone 5S, one of the new features that was unveiled was the fingerprint scanner. This device allows users to biometrically authenticate into their phones without using a password. All you need is a finger and you’re set. When the news broke officially, I joked on Twitter that girlfriends all over the country would start the following conversation:

Bae: “You got the new iPhone?”

Bae: “Nice! So, do you use that fingerprint thingy to unlock your phone?”

Denarius: “Yeah, all the time! So easy to use!”

Bae: “So when are you going to add me to the fingerprint list?” You don’t got nothing to hide right?!

Denarius: *looks around the room and tugs at his right ear* “Erra…Erra….Erra…. I would Bae, but too many fingerprints slows my phone up too much. I can only save one. Sorry! *Kisses Bae on forehead to initiate foreplay and divert attention*

In all seriousness, the battle over privacy vs. full disclosure in a relationship shouldn’t be looked at as a “zero-sum” reality. Whenever privacy and snooping are discussed, the usual defenses arise. Statements such as “you shouldn’t have anything to hide”, “Why don’t you tell me everything” and “I don’t trust someone who needs to keep things private” to me shows a lack of trust and slight immaturity. There is a difference between withholding information, and being private. I think too many people combine the terms into one huge category, and that’s wrong. I know that privacy does hold positive value in a relationship. Here are a few ways in which privacy strengthens relationships:

I have seen men and women get boo’d up and gradually lose their uniqueness. I won’t say they changed, because realistically we all evolve when placed in different life situations. If you’re going to change, become a better person. Don’t become generic. When you have a sense of privacy with your movements or life situations, it shows you have tact. If someone knew everything about you, wouldn’t you become boring? Keeping a certain mystique about you makes you more appealing and interesting. Now this doesn’t mean I condone being private about the 4 other girls who think they are #1, this just means knowing time and place. Some information is confidential and can’t be shared with your S/O. For example, if you work with sensitive information (government, law enforcement, auditor, etc.), you can’t share certain information by law. You don’t want to lose your job over pillow talk and even though you know you can “trust” your boo, you don’t want to take the chance. Trust me it happens often and more innocently than you imagine. You also aren’t obligated to tell your ___friend anything about your home boys’ personal life. It might be juicy gossip, but it’s not critical knowledge to prove any level of trust between you two. Which leads to my next point…

See Also:  Do cheaters have the right to remain silent?

We all know the friends who couldn’t keep a secret if their life was on the line. We also cherish the individuals who will take certain events to the grave. The difference between the two is values. Some people value information differently, and knowing this will help you become more aware of who should know what. You should assume that your significant other talks about you to their friends. It gets problematic when the entire friend base seems to know your likes, dislikes, work problems, ad that “other” thing you do betwixt the sheets. The outside world doesn’t have to know every aspect of your relationship. Family and friends are more than willing to offer their opinions or take sides in an argument. However, when you invite a plethora of people into your business, you invite division between you and your boo. You get the sense that you are on trial and the friends serve as “independent arbiters” on your case. No one wants that.

Privacy Helps Determine If Your Partner Doubts Your Fidelity

I’m adamant in declaring that any type of snooping is a deal breaker in a relationship with me. I haven’t gone through any woman’s personal items without permission and I expect the same respect to be given to me. You are not Eric Snowden, nor do you work for the NSA, so your boy/girlfriend’s information isn’t considered yours too. Passwords on phones, email, and other devices aren’t always a nefarious plot to keep all shady business dealings secretive. Security has multiple benefits. Some men and mostly women told me that if their S/O doesn’t give them passwords or free reign to peruse their email and phones, then they assume the worst. My immediate retort is “then why did you commit to someone who’s character was so shaky to you?” Demands for access from people like that show me insecurity and distrust. People have a right to their own privacy, and shouldn’t be forced, pressured, or guilted into giving that up as a “sign that they are 100% honest”. I don’t know how it is with married couples, so please enlighten me. For regular relationships, I think we ski down a slippery slalom when we equate relinquishing freedoms to a person’s trustworthiness The flip side of my stance is the looming spider sense known as woman’s intuition. I’m a believer in this gut feeling that women get when something’s wrong, but that can’t always be the determining factor on whether or not you snoop. Sometimes, you hit old as in the case with Ahyiana and her tale of spelunking through an ex’s text messages. Stories like these will justify many women’s (and men’s) position that detective work is key to your sanity. What if there’s nothing to find? What if you violated your significant others privacy only to realize your suspicion was unwarranted. How do you expect them to trust you and your character now after your paranoia caused you to invade their personal space? Privacy is not a four letter word. In a trusting relationship, it can help strengthen the bonds between two people. If I know I can trust you with anything, even the respect of my own privacy and personal space, then that will help me grow closer to you. Snooping is a double edged sword. To feel the urge to do so highlights bigger issues in a relationship. Realize that once you cross that threshold, there’s no turning back. You should also know your partner. If your partner values complete openness (a.k.a. sharing of all passwords and liberties), then you cannot complain once it becomes too much. You knew what it was before it was what it was!

How important is privacy in a relationship? What do you like to keep private? Is there a correlation between level of trust and level of privacy desired?

tags: privacy snooping trust
previous Snoop Through His Phone At Your Own Risk
next The Princess and the Frog: Why We Stay in Bad Relationships