Home Around the Web Miss America Nina Davuluri’s Victory Impacts Black Americans
Around the Web
Other Stuff We Like
Politics
September 23, 2013 WisdomIsMisery 12 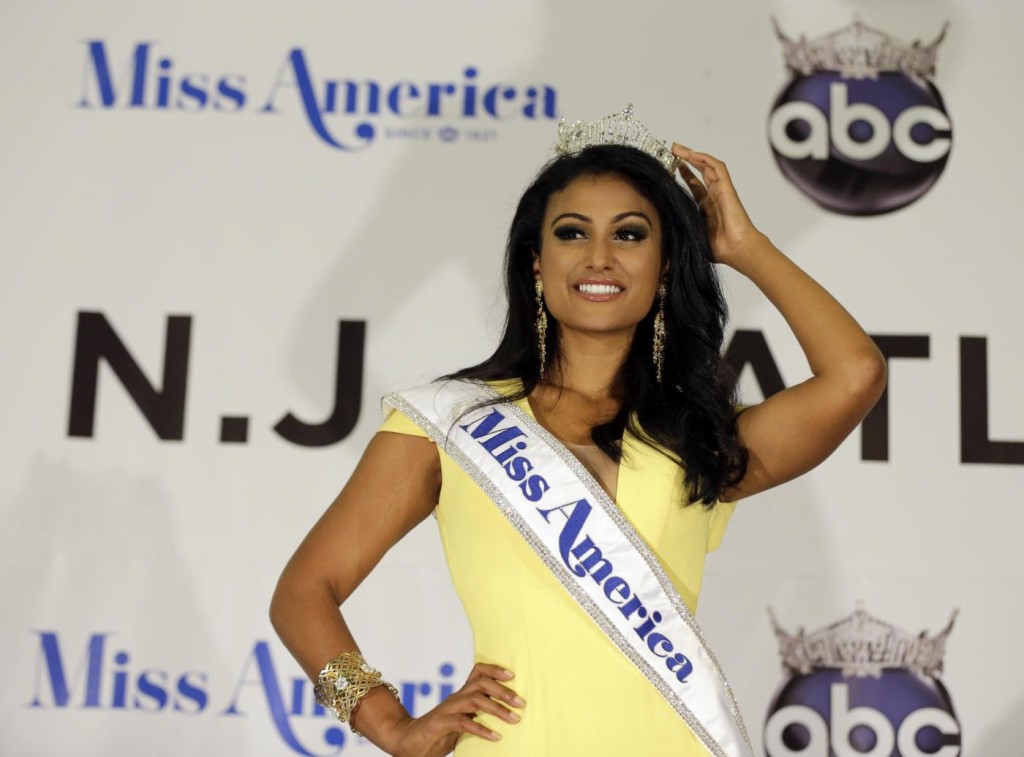 As you might imagine, the Miss American crown going to anyone but an American-American – however you visually define that stereotype – received plenty of negative and in some cases, racist backlash. There are plenty of stories on that topic, but that’s not what I want to focus on today. Two specific stories on the topic sparked my interest.

Why I’m Not Proud an Indian-American Is Miss America

There is nothing I hate more than when an Indian person does well at something.

It’s not some sort of innate self-loathing (well, not for that reason anyways) or jealousy, but because news reports of any noteworthy South Asian achievement are immediately followed by texts from friends of “Did you see? S/He’s INDIAN.” It’s as if this stranger’s victory is all the more palpable to me by some grace of shared concentration of melanin, and I never know how to respond. “Great”? “Can’t hold down that brown”? “I think that’s my cousin”?

I understand why it’s a big fucking deal that an Indian-American woman won Miss America for the first time. It’s just as important as when Rima Faikh became the first Lebanese-American, and first Muslim, to win Miss USA in 2010. I find beauty pageants moronic (the title is a meaningless honor, 35 percent of which can be attributed to how good she looks in different articles of clothing and zero percent to her ability to grasp a basic concept of percentages), but I’m aware that these victories can shake up and change previous models of “All-American.” I’m glad that we’re moving toward a future where beauty queens of color are normal and not exceptional. It’s just that every time an Indian achieves something big—a beauty pageant, a huge spelling bee, majority ownership in a major sports franchise—I feel like my excitement for my brown brethren is less actual excitement, and more just something I’m supposed to say.

Two nights ago, when Nina Davuluri became the first Indian American to be crowned Miss America, I got another flood of texts, and the cycle started all over again.

Facing a barrage of racist tweets that ranged from calling her an Arab and a terrorist to correlating her victory with a potential decline in gas prices, Davuluri hasn’t had it easy. But is being lauded for her race by those decrying the racist tweeters any better? Those that have come to her defense have chosen to mainly focus on her race as well, not just as a reason to celebrate her victory, but as the reason. Maybe I’m just looking to pick a fight with my white-hating coworkers, but where I find the racist drivel on Twitter offensive, I also find the uplifting blog posts on race condescending. Writers have done a marvelous job defending Davuluri, but in doing so, they’ve focused the entire conversation on just one facet of her life: her race.

Read the full article at [Gawker.com]

See Also:  Aging Spurs Bow Out in First Round of Playoffs: End of a Dynasty?

On this same story, a commenter offered a dissenting viewpoint:

KoalarinU – Beejoli Shah: You know, I really had to think about my response here because my anger at your ignorance is making it hard for me to be coherent. So, even though I know no one is going to read this, I have to apologize in advance for my incoherence.

Yes, you’re right—she doesn’t represent all Indian Americans, and neither do you. You do not represent my opinions any more than Nina represents the actions of any other Indian person. I don’t get to share in her victory. HOWEVER, as an Indian woman who has been marginalized since I was a child because I am “othered” by the majority as soon as I walk in a room, the fact that she has achieved this sort of dubious distinction is AWESOME for me, and one day for my kids.

Did she cure cancer or fly to Jupiter or do something truly brilliant? No. The victory is in how much of a non-thing this is. People think she’s pretty! She achieved something superficial and kind of silly! What that means is that we’re one step closer to being mainstream, normal people instead of “Indian” people. The more members of our race achieve by being VISIBLE IN PLACES WHERE WE HAVE NEVER BEEN VISIBLE BEFORE, the less frequently we’ll have qualifiers in front of our names when you are listed as, for example, “Gawker’s Lease Likable Indian Writer” or whatever. Now you can just be the Least Likable Writer! Isn’t that awesome?

That’s what Mindy is getting at. She doesn’t want to have qualifiers like “Indian Writer” and I don’t want to be a bitchy Indian commenter. I’m a bitchy commenter. And the more of us that are out in public, making strides, doing this shit you’re so dismissive of, the better it ends up being for all of us. It’s the opposite of the Tragedy of the Commons. Game theory, dumbass—look it up.

Anyway, thanks for being a great example of an Indian person who is absolutely not someone I want as a role model for my kids. We have things like Black History Month not just to remember the tragedies of the past but to remind our children and ourselves of what struggles Black people have faced and overcome, and so that we don’t forget them. Maybe you haven’t faced struggles because of your race, but I have and I’ll be damned if you try to take away my pride every time one more Indian person pushes forward and shows a racist group of people who would otherwise marginalize me that I’m not some exotic spicy whatever. I’m a normal damn human fucking being.

Miss America Nina Davuluri Is Not a Symbol of Progress

During my Tuesday morning subway commute, I encountered a man who felt the need to stare at me while I walked by. As I passed him, he whispered, “Miss America” at me. I kept walking, slightly confused at this unusual catcall. And then I remembered: as of Sunday night, Miss America was, like me, an American-born desi. Nina Davuluri, from Syracuse, New York—both conventionally gorgeous and medical school–bound—had won the title. Between this new form of catcalling and the inevitable comparisons to her by my nosy aunties, it was clear: she was put on this planet to make my life miserable.

Of course, this historic achievement wasn’t all roses for Davuluri either. Upon her crowning, Twitter overflowed with angry, post-9/11 racial hatred. “Miss New York is an Indian. With all due respect, this is America” chimed one tweeter. Another angrily writes, “How the fuck does a foreigner win miss America? She is a Arab! #idiots.” Actually, no she’s not an “Arab,” she’s an American-born Hindu of South Asian descent.

Here’s what I think those racist commenters are trying to say: We (brown people) did it again; we managed to take another seat that had, for the most part, been occupied for nearly a century by a white face. Miss America, like the president himself, is an important (if illusory) signifier of who’s in charge around here. All of a sudden “we” brown people were two for two in Obama’s America.

Read the full story at [TheNation.com]

What struck a chord with  me about both of these stories (and the associated comment from KoalarinU), was how much I could identify with the opinions despite not being of Indian-American heritage. Instead, I identified with their struggles, frustrations, opinions and general tone as a fellow representative of minority racial heritage in the United States of America. I thought all the writers made good points, and I felt a bit taken aback about how I could identify with their points through the viewpoint of a (relatively) young African American male.

I wondered if others felt the same way. I don’t want to assume, but it’s no secret that if you’re reading SBM, you are likely of African-American or Latin descent (we have the stats to back this up). You are more than likely a woman as well. Therefore, I wondered if others, especially women, identified with the frustrations, backlash, or if you are simply tired of race being thrust into the forefront of every discussion in America?

I ask these questions, because in reading the pieces above, I felt that many of the words could have easily – and I don’ mean this to be insensitive – been changed to reflect the Black experience, or Hispanic experiences, and by extension, the Caucasian experience in America. Perhaps those in the majority are equally frustrated to be constantly reminded of the perceived inequities in America that, in most instances, they too must face and overcome – although we can obviously debate ad nauseum which of us truly has it the most difficult.

Did Nina Davuluri’s victory impact you or your views in any way? Did you find you identified with her accomplishment as a minority, whether that be by race or as a fellow woman of color? Do you feel America still needs to recognize every time a “first” occurs whenever someone of a race that varies from the majority achieves an accomplishment? Which of the opinion pieces above do you most identify with?