Home Featured The One That Got Away
Featured
September 23, 2013 WisdomIsMisery 28

The One That Got Away 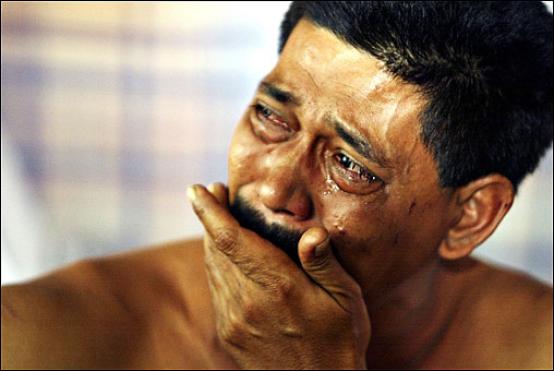 Brother Dr.J’s cautionary tale of when simping goes wrong inspired me to tell you guys a story too. I can relate to J’s plight of simping on a woman for far too long, but that’s not what today’s story is about. I feel J more than sufficiently addressed that topic. Instead, I want to talk to you about “the one that got away.” But, before you get too far into your happy feelings, I must forewarn you that I mean this in the most non-sentimental, unemotional, and generally unromantic sense possible. If you want a romantic version of the one that got away, you need to read this post, because today’s post is not that post.

Before we begin, I know what you’re thinking. WIM, you’re a grown ass man. You’re happy and in a relationship. Why are you living in the past? All of these assumptions are true, except for the last question. I am a grown ass man. I am happy, and I am in a great relationship. I’m not living in the past by any means. I don’t regret the decisions I made or how my life has unfolded. But, let me put it like this, a woman once told me she sometimes feels like some men still owe her a ring due to the time and emotions she invested into a relationship that ended prematurely. That’s the rough equivalent.

Yes, I’ve moved on. I’m happy with where I am in my life. I’m simply wondering why this platinum plaque, NBA banner, or other figuratively representative memorabilia doesn’t adorn the walls of my memory.

Dear readers, don’t get me wrong. I’m not Kanye West. I’m not that arrogant . It’s not like I feel like there are “still women who owe me sex.” No woman anywhere really owes me anything. Yet, SBM familia, I’d be lying to you if I said I don’t think about a couple of the women in my past that got away without me getting my hands on them, literally or figuratively.

Perhaps some of the fellas can relate. You meet a woman. Everything is going great, then something in the cosmos fails to align and the woman you thought you were building a great (albeit superficial) relationship with disappears into the oblivion, usually never to be seen or heard from again.

Honestly, this has happened to me numerous times. One day we’re FWBs. The next day we’re complete strangers. For the most part, this doesn’t bother me very much. That’s life.

On the other hand, sometimes there’s that one. That one I can’t wrap my head around. The ending to our story, no matter how many times I revisit the plot, cliff notes or climax, just doesn’t make sense. Today, I’m going to share such a story of #Fail with you.

Once upon a time…

…there was this girl I used to talk to. We don’t talk anymore, but we still run in the same social circles. I’m not Dr. Seuss but I see her here, I see here there, but I don’t see her everywhere. For the most part, we don’t speak. There are no hard feelings between us, but like me, she’s moved forward with her life just like I’ve done in my own. We could talk, but what is there to say? Not much. So we don’t.

It is what it is.

However, there was a time when we did speak. We spoke a lot. But, for reasons I’d normally be too ashamed to explain, I couldn’t close the deal. The main reason? She was TOO fine. Not too fine in the literal sense, but she was definitely too fine to be messing with me.

I’m going to be open with you, SBM friends. Back in the day, I had issues with fine women. Young WIM couldn’t mentally reconcile the idea that beautiful women liked to have sex. I don’t know why I felt this way. I just did. Beautiful women were like the porcelain dolls of the dating game for me. I felt like if I didn’t “handle them with care” I would break them; fragile as they were, in my imagination anyway. In the race of life, WIM stumbled out of the gates folks.

Further complicating this issue was the fact that I could not for the life of me figure out why this woman was dealing with me. THIS WOMAN WAS BAD!!! She could have literally – and probably deserved to – have any man in town. Yet, she was messing with my low life, broke, no good self. All I really had to offer was my childlike innocence, zest for life, and moderately rugged good looks.

It didn’t make a lot of sense to Young WIM why she kept me around, but I was grateful for the opportunity. I was just happy to be around her. Simply having her on my arm while others looked on jealously was more than sufficient as far as I was concerned. It never even occurred to me that I could and/or probably should have taken things to the next level.

This went on for months! 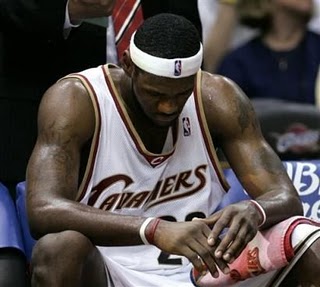 I had opportunity upon opportunity to take the game winning shot, but like LeBron James before he finally won his first championship, I deferred every time. I’d pass at the last second. Or I’d get nervous and take low-percentage shots from the wing instead of dominating the paint or driving to the lane. I don’t know why I did this. Everyone knew I was capable of dominant individual performances with regular season average women, but when the fine-women playoff game was on the line, I consistently failed to come through in the clutch! I could have taken home the trophy months or years earlier, but I was just happy to be in the game, coach!

One night, the final loss occurred. (Editor’s Note: I’ll attempt to keep this story vague as not to identify the woman in question.)

This fine woman and I went out one night. Everything was going great. To give you proper context on how great the night was going, let me explain to you how the night started off. Ladies and gentlemen, the woman came to my car with an oversized bag. Like the former idiot that I was, some of you might be unaware of the significance of a woman getting into your car with an oversized bag. Let me briefly explain.

Fellas, the oversize bag theory dictates that your odds of consenting copulation that night with a heterosexual woman are 210% greater than other nights. The oversized bag goes by many names, “the overnight bag,” the “incase it goes down bag” “the I can’t use his soap so I’m bringing my own soap and shampoo” bag, but the consistent point of the oversized bag is because this woman – unbeknownst to you – has already determined that she has absolutely no plans to return home that night. The oversized bag is the rough equivalent to Thor’s hammer or Pam Oliver’s wig. Basically, it is a must have item filled with key essentials that a woman needs to survive for the next 24 – 72 hours, because she plans to be with OR under you for that period.

In my 20s, my dumb ass had no idea about the oversized bag theory! I was already hustling backwards! Side note, young men of the world, if this is your first time hearing about the oversized bag theory (and you’re probably in a fistful of tears, no Maxwell, thinking about all of the women you screwed this up with) BE SURE TO NEVER POINT OUT OR SHARE THE WISDOM THAT YOU KNOW ABOUT THE OVERSIED BAG THEORY! This will only decrease your odds of copulation with a heterosexual woman 350% because it’ll make her feel like you’re judging her. Trust me, the last thing a woman who is about to have sexual relations with you wants to feel is judged.

There are known knowns and known unknowns, but if you are in the known known group, ACT LIKE YOU DON’T KNOW!

Back to the story…

Our great night comes to an end. The fine woman, oversized bag in tote, looks me dead in the windows of my soul and says those words every man dreads to hear because he’s never sure how to answer, “So…what do we do now?”

Then she gave me the Nala Stare. 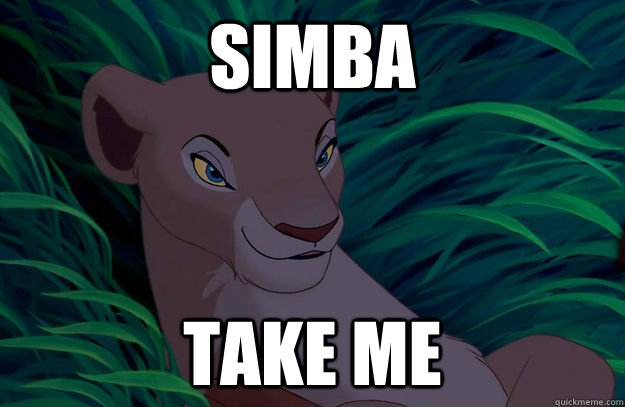 Any man with common sense knows “so what do we do now” combined with the Nala Stare means the buns are warming in the oven and are primed for sampling. MY DUMB ASS, goes the dumb and dumber route of, “I guess I’ll take you home”…..at 2:37am in the morning.

We drove home in silence. I imagine she was sitting in the passenger seat feeling a mix of rejection and confusion, probably reconciling her emotions by assuming “he must be gay.”

When we arrived at her house – the game clock in the final seconds – she SOMEHOW took it upon herself to give me another chance. We made out heavily against the car. I remember she slowly guided my hand down the back of her pants. If she had on anything at all, it was a g-string at best.

Listen, I’ve never felt a booty so soft! (That is until I met my current woman, obviously.) Her booty melted into my hands like a pillow stuffed with the downy plum of a unicorn’s mane! Sadly, rather than uplift my spirits, the softness of her booty only diminished Young WIM’s self-esteem.

I said to myself, “Self, you don’t deserve a booty this soft! You are not worthy! Just take this kiss, grab on her booty a few more times, and be grateful to the Second Base Gods she hasn’t realized how lame you are, yet! This fine woman’s soft ass booty is out of your league!”

Our embrace finally ended. She paused, as if waiting for me to ask a question I was too ignorant to know. Then she dropped my hand, retrieved her oversized bag from my car…..and walked into her parents’ house.

I wish I could tell you I walked away from this experience a better man. That I learned some life-lesson or there’s a moral to this story. That I somehow gathered my courage game up in the waning moments, tackled her in the front yard, and grappled with her under the watchful eye of the man on the moon…

Tragically SBM readers, if I said those things I would only be lying to you. I walked away from this ill-fated incident a humbled failure. For years, I replayed that night in my head and the various scenarios of how it could have ended differently. In all the slow-motion replays of my mind, the only consistency is the fact that I was young…stupid…and didn’t have the courage to take what I wanted. On many nights, I have wept thug tears in Young WIM’s honor!!!

As not to end on a solemn note, all I can offer those of you among us who have also failed in the game of love is this… Since that night, I have gone on to win a few championships. I’ve closed several deals, and I’ve been with women who are equal to or badder than the woman in this story. Still, as I said in the beginning….

In the words of Brother Dr. J: #SheWasFineTho.

tags: cautionary tale comedy humor sad satire story The One that Got Away tragedy woman
previous Confessions of A Simp: It Happens, Learn From It, Move On
next The [Second] Worst Thing a Man Can Do To a Woman