Home Featured The [Second] Worst Thing a Man Can Do To a Woman
Featured
Rules of Engagement
September 23, 2013 SBM Staff 47

The [Second] Worst Thing a Man Can Do To a Woman 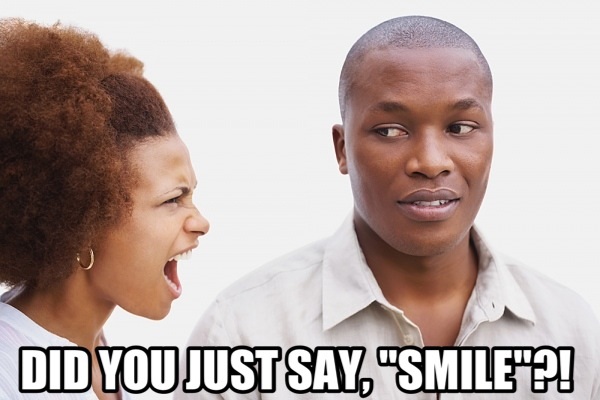 I came across the following Salon article due to this introductory clause on their Twitter account, “This is the absolute worst thing a man can say to a woman.”

“Smile, baby”: The words no woman wants to hear

Yesterday, I missed a train and I was frustrated, hot and tired. A man standing in the station decided it was a good time to pass his hand along my arm as I ran by and whisper, “You’d be even prettier if you smiled.” Here’s the thing about “Smile, baby,” the more commonly uttered variant of the same sentiment: No woman wants to hear it. And every woman wonders, no matter how briefly, about what could happen if she doesn’t smile. I was in a crowded place and perfectly safe, but that is actually, in the end, irrelevant. I have, in the past, been followed by men like him.

Without exception, this phrase means a man is entirely comfortable telling a woman, probably one he doesn’t even know, what he wants her to do with her body to please him. This suggests a lack of respect for other people’s bodily integrity and autonomy. The phrase, and others more sexually explicit, are verbal expressions of male entitlement. The touching would reinforce that suggestion. Two “inconsequential” little words. A small thing, until you consider street harassment as the normalization of male dominance. Harassing men are arbiters of public space and their everyday regulation of women in those spaces results in what, in 1993, Cynthia Grant Bowman called the “informal ghettoization of women.” Then it’s not so small.

Street harassment is very gendered, linked to violence and overwhelmingly heteronormative. Women are generally not harassing men, grabbing their bodies or otherwise threatening them in public. I have been called every conceivable gendered slur under the sun for not complying with the sexualized demands of total strangers in public places. I’m taking about boys and men muttering obscenities, making pornographic suggestions, touching people they don’t know in intimate ways, lurking on stoops, staring from benches, and following girls in cars. It puts a damper on a sunny day when you go for a walk and someone yells that you’re a “fucking slut” because you don’t respond to their request that you stop and talk to them.

Read the full article at [Salon.com]

See Also:  House of Lies: An Analysis of The Multiple Lives We Lead

tags: Men Rules of Engagement Salon smile Street Harassment Women
previous The One That Got Away
next Man Says Women are Intellectually Inferior and Intimidated By Him