5 Things Women Do that Men Hate, but Tolerate Because We Care 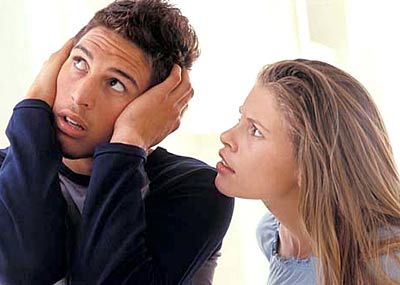 Relationships are built on love, admiration, and compromise. However, I’ll be damned if men don’t overlook certain things that may drive us up a wall, but we tolerate because you are that special. I never knew the true meaning of “Women: Can’t live with them, can’t live without them” until I got into my first relationship. Ever since then, I’ve matured in both mind and body, and know what to expect and how to operate accordingly. Here is a short list of some things you do that might annoy us, but we let go:

The Desire To Attend Undesirable Events

“Did you hear?!  My friend Amber is expecting! We definitely have to go to this baby shower. All the girls will be there, and I’m sure you can make friends with the guys there. It’ll be a blast!! :o)”

Messages like the above will make men cringe. Women are very outgoing and want to involve you in their lives completely once you are a couple, but sometimes men would not mind if you did certain things on your own. Men on the whole don’t want to befriend all your friends or attend every “awww this is cute!” event that you schedule. However, we know that if we drag you to a movie you don’t want to see, and you go with minimal kicking / screaming, then it’s only right that we do the same. I believe that the frequency in which women bring up these unappealing events trumps men by a ration of 3:1.

Hanging with couples is cool, but to make that the primary focus of entertainment with your friends can be a bit cumbersome. It’s also completely healthy to have fun with your own friends too. Sometimes men need a break, but attending these events isn’t the end of the world. Men can suffer from “girlfriend entertainment” overload when it becomes consistent and repetitive. That sounded worse than it is, but just work with me here, OK?

Men can be succinct when we answer you. It isn’t that we aren’t interested in a question you asked, it’s just that we like to get to the point. Women at times will not accept that as a suitable answer and will commence their loving interrogation. “What are you doing? How are you feeling? What do you mean by that? Are you high right now? Do you ever get nervous?” I swear that women detectives will eventually discover Tupac on that beach in the Bahamas one day, because of their diligence and inquisitive nature. This is a desirous trait to have in many professions. In a relationship it can go either way.

Women’s intuition will always tell them if they have to probe to find answers to potentially shady dealings on your behalf, but women also want to know everything about a man they are seeing (or at least will try their best to determine substance). It’s truly innocuous the majority of the time, but boy can it also get annoying! Sometimes, we just wanted to order the lamb instead of the chicken because it was something new without an ulterior motive! All I ask is that women know the difference between “lovingly probing” us and sticking your finger an inch away from our face while saying “I’m not touching you… I’m  not touching you!”

Hear me out before you call me everything but what my mother named me. Fellas, have you ever been laying on the couch and your woman comes up to lay next to you and will purposely stick her feet up under your kneecap to “warm” them? Let’s not even talk about your dead and numb arm as a result of improper cuddling technique. How about when you come from the store and you’re carrying the most heavy items, struggling not to look weak while making your way to the car/public transportation, and that’s the moment she picks to hold your hand? Women want and need that affection, and will touch you and let you know you’re gonna get some good touchy feely loving too. However, some times we have to focus or get comfy and can’t do all of that. Unless that irregular, non-essential hand spooning leads to full body knifing and forking, you must chill!

Women, you are very detailed. This characteristic is ingrained in your DNA and can be very useful. It can also be a burden to our ears and minds when you deliver a thesis entitled “My day: From Sunrise to Sunset.” You will deliver such intricate aspects of your day so eloquently that it would make J.K. Rowling blush. The problem for men is that we sometimes can’t determine what details are important and which ones are filler. You give us 2 discs-worth of stories with a lot of skippable tracks, and men will still listen (or feign attentiveness flawlessly).  You don’t believe me? Well next time you see a guy and gal walking down the street with only the woman talking, look at the guys face. You’ll see either genuine interest, pure struggle, or a combination of intrigue and stress. It’s pure comedy, and men who see this get it and feel them 100%.

Are we going to hit you with #nobodycares? Of course not! We aren’t that oblivious to your feelings. We understand that everything you tell us holds equal importance, so we will listen to it all. Every.Single.Word. We won’t ask you to trim it down to avoid any hurt feelings or a possible argument, unless it’s absolutely necessary. Men are wired different where some of us can give you the cliff notes version of our day, and provide further colour if prompted. We expect the same from you, foolishly I admit, but know that won’t be the case all of the time. We even get used to the usual banter of “bitches who don’t know their place”, the boss who just doesn’t get it, and  the nail shop that just raised prices out of nowhere. We don’t really ask you to change it, because it’s you. Appreciate us for being there for you during your most verbose times.

Men/Women –  if I’ve left out one that you think is important, let us know.

Men will always love the hell out of you ladies, but just recognize that as a whole you do some things that make us scratch our head, but it’s you so we’re good. The brothers may vent to you on these topics, but most won’t so I speak up in their place.

Next Week: 5 things that men do that piss women off, but they tolerate anyway!

tags: Dating Men Relationships things women do Women
previous Man Says Women are Intellectually Inferior and Intimidated By Him
next You Want a Ring? Make Me a Sandwich. Seriously, Like 300 of 'Em.