Home Featured Married is the New Single: When is a marriage really over?
Featured
October 7, 2013 WisdomIsMisery 17

Married is the New Single: When is a marriage really over? 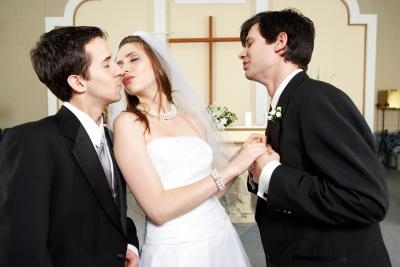 Unfortunately, if you’ve played the dating game long enough you’ve probably (accidentally?) dated a married person or suspected you dated a committed/married person. You might not have any concrete evidence that they’re lying, but their actions don’t match their words. Maybe you can relate to this story.

Boy meets girl. Everything is going great. They claim to be single. They’re wonderful to hang out with – usually in awkward hours. They meet all of your needs and the rest of those superficial qualities you want in a mate.  But, something just isn’t right about them. They have great text-based conversations between the hours of 8:01am – 4:59pm, THEN THEY FALL OF THE FACE OF THE EARTH!

A quick story from my own personal well of experiences…

Young WIM – literally young, I was probably 23 or so and equally as dumb in the ways of the world. I met this woman off of BlackPlanet.com (strike one) and she tells me she’s “separated” (strike two). I wasn’t even familiar with the term. I just saw a pair of 28-year-old yams that I thought needed further investigation. Anywho, flash-forward to the first night we finally have a chance to meet due to her ever-changing, frequently erratic schedule (strike three).

Why did she have Young WIM ducking behind club pillars because her husband showed up? They were indeed legally “separated” but she left out the “he’s crazy, big and liable to kill you and everyone in this club” part.

Because I feel like we’re family here, I can’t lie to y’all and say #SheWasTooFine.

But I can say #SheWasThick.

I’d love to tell you all how that story ended, but the SBM experience is a family-friendly affair. The point is: You live, you learn and if you’re lucky, you live to talk about it. On DamnPops post last week, Can You Sleep With Someone Else While On a Break?, a related question I asked ended up becoming a 21-reply comment thread. I learned I’m not the only one confused by the fluid relationship status of the married, yet single and dating. A few excerpts from the conversation:

WisdomIsMisery: I don’t do (formal) breaks. We’re either broke up or not. Back in college and earlier, I pretended not to know my status, but in reality, I simply didn’t care to investigate. Ignorance was bliss.

On your latter point, I do find “separated” married couples an interesting conundrum. I’ve run into a few women like that. It’s almost like “separated” is the new “married,” in the year of our Lord 2,013.

I’d be interested in hearing married/separated people’s viewpoint on that or how you single folks deal with someone who’s married but claims to be separated.

shareefjackson: I was separated for a while before I divorced, and my personal belief is that you don’t mess around until you’re legally divorced.

An actual Divorce is not always so cut-n-dry and may actually do more harm than good especially after being married for a long duration where you may have accumulated assets, property, health coverage, life insurance policies and such. So there are conditions where a legal separation is best.

A legal separation is much like an actual divorce in terms of you are now free to do as you please as a single individual (except remarry) while you still get to retain some of the financial/insurance benefits of a married couple.

If a married person is really separated like FOR REAL FOR REAL.. I don’t see any reason why they need to wait until legally divorced to move on and date.

shareefjackson: I hear what you’re saying. I just think part of going into marriage is that its a legal entity, and until that’s done you’re in it. Retaining the benefits as you say is like having your cookie and eating too. It’s very messy, doesn’t work for everyone, and not fair – but it’s where my mind is that.

Female: Separated is the new married. I have been married for 10 years, right out of college and was separated for a year up until this May; started seeing someone for about 8 months during separation but he eventually grew tired of my separated status considering I was in no rush to make any moves towards divorce. When I reconciled with my husband, we did not discuss our actions during said separation(which is fine with me). The conundrum arises when u still have those lingering feelings for that person you were enjoying during that separation period.

There you have it folks. “It’s complicated” is not just a Facebook relationship status out here in the real world. What are your thoughts?

Have you or would you ever date someone who is married but separated? Do you believe someone must be legally divorced before they can move on and start dating? Have any harrowing tales of redemption or near death experiences that you (or a friend) experienced while dating a married “but single” person?

tags: Dating divorce married Relationships separated single
previous The Ex Factor: How to Pick Your Next Mate
next The Best Man: The Divorcee or the Perpetually Single?