Is A Man Living With His Parent(s) Really A Dealbreaker? 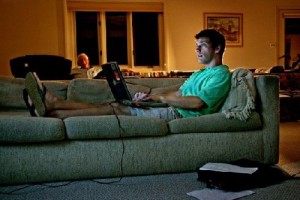 Off the strength of the title please allow me to clear something up: I do not think a 40 year old man living at home is the the business. That’s not a good look.

I thought this was a pretty interesting topic, so I decided to look up some statistics on census.gov

Between 2005 and 2011, the proportion of young adults living in their parents’ home increased, according to the U.S. Census Bureau. The percentage of men age 25 to 34 living in the home of their parents rose from 14 percent in 2005 to 19 percent in 2011 and from 8 percent to 10 percent over the period for women.

Now it seems that across the board more young adults have delayed moving out of the house.

Much of everything these days has been delayed (i.e. marriage, having children). This could be contingent on a lot of things. I think a huge part of people living on their own depends on cost of living. Along with the cost of living, I also think having a job that provides a substantial salary is imperative.

See Also:  Should You Ever Delete Facebook for Your Relationship?

Now I come to you speaking as a New Yorker living in the second most expensive borough, Brooklyn. It’s always been a goal of mine to be  self-sufficient by 25  or at least during 25. I’m currently 24 and I think my goal is attainable. Something I’ve realized in my two years since graduating is that it’s not easy  living on your own in Brooklyn. The prices landlords ask for studio apartments are out of line as far as I’m concerned. Maybe we could blame the Barclay’s. Maybe we should blame the resurgence of neighborhoods like Red Hook, Fort Greene and Williamsburg. Truth be told, it’s all irrelevant. These circumstances stop many people  from having their own place.

So for the women and men reading: How important is it for your partner to have his or her own place?

Speaking as guy, I don’t know if a woman living with her parents is a deal breaker. Women get away with murder on this issue. I don’t think many guys really care if a woman still lives at home. Conversely, I think much more is expected of us men. I don’t think that’s totally wrong . Given the confounding variables I’ve mentioned, could any exceptions be made in your estimation? Is it right for a woman to demand a man have his own place but she not have hers? How about vice versa? I’m curious to know where you stand. Don’t be shy.

tags: Dating dealbreakers love Relationships
previous Men: Want to Lose Your Woman to Columbus Elba? Do These Things.
next 9 Clear Signs a Guy Is Blowing You Off