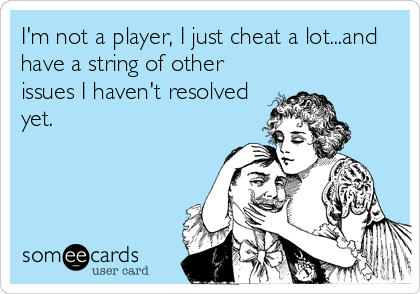 Players never win, that is my philosophy.

People who cheat think they are getting ahead, but they are only fooling themselves. Not only are players cheating themselves, but their actions reflect what they carry inside, a lack of maturity and an unhealthy development into adulthood.

When I hear men who are players call their women insecure, I realize that this is the man speaking out of a guilty conscious and using a primitive defense mechanism called Projection. Usually, men attribute their own undesirable thoughts and feelings onto their women who do not have those thoughts and feelings. Does this sound familiar? Little do these men know, they are the ones who are insecure in themselves.

Players demonstrate their insecurity by jumping from one woman to another in search for happiness and self- satisfaction. Basically, they are not happy with themselves. This is mainly because they don’t feel love or don’t feel they have real love for anyone. So they hide that emptiness in the lifestyle of a player where expression of emotions is not required and lovelessness reigns.

See Also:  The Truth about SBM ... A Hopeless Romantic

I met a guy who had a real nice girlfriend. He stayed with her because she was a good girl, the type he could bring home to his mother and the type he thought would make a good mother to his children. She was very pretty too. However, this guy still had his mind on other girls. He started off flirting until one day he was unfaithful to his girl. People think flirting is all fun and games until someone gets hurt. In this case, he hurt his beloved because maybe he was insecure with himself. Why did he cheat? Maybe he wasn’t satisfied with himself. Maybe he wasn’t ready to be faithful or monogamous and he wasn’t confident or mature enough to admit it and handle it in a responsible way.

I know men who are so confident in themselves and satisfied with their relationship that they have no desire to entertain other women. That’s why my theory about men who cheat is a reflection of their insecurity. They are not confident enough in themselves; There is a lack of self- realization so they jump around from woman to woman hiding this lack of personal growth. They have not yet reached the milestone of finding a loving relationship and instead are still fighting the battle of intimacy versus isolation. Because of this lack of adult realization, they “act out” defensively by being a player.

These soulless, heartless cheating men have a lot to learn about themselves. The help they need is not from another woman, but from a therapist. So women stay away. Don’t be inclined to ‘help’ or ‘change’ these men into the ‘good’ man you want him to be. This change will only be initiated by their own self-realization.

This post originally appeared on Seriously, Maybe. Now what say you all?!

tags: Dating insecure men Men Relationships seriously maybe
previous Marriage & Success? Sure. Dating & Success? Not so much.
next Girlfriend Zero: The One That Ruined Him