Let’s Talk About It: Is Makeup A Cheat Code For Women? 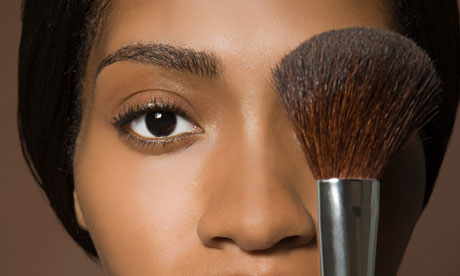 I come to you all today literally walking on eggshells. Ladies and gentlemen I sort of have a growing issue. It pertains to women and the use of makeup. Allow me to  explain before you come at me with the pitchforks. For the record, I think makeup is necessary. The philosophy I have is that makeup is meant to enhance rather than to cause a metamorphosis. Lately (or maybe not) I’m starting to notice abuse of makeup.

In this world that has become so viral, damn near everything is documented. There’s nothing wrong with this for the record. If we go to a fly ass restaurant, we share our dish with the world. If a shorty has some new suede pumps she shares that with the world. When we all go to clubs and lounges we document that event through photos. Long story short, we have fun documenting events in our lives with others.

Something else I have seen being documented more frequently is makeup artists (MUA’s).

Many of them that I see do a hell of a job. I actually like a lot of what they do. What I have grown to have an issue with are the before and after split screen photos. I know we’ve all seen them by now. In case you haven’t, here’s an example: Woman with severe acne gets makeup done. She now has extra flawless skin. In truth, it damn near looks like there’s no makeup on sometimes.

See Also:  7 Things About Women I Learned From Watching My Father

As a man seeing this it sort of upsets me.

You see, I guess I like women who don’t use makeup out of necessity. As I said earlier I think it’s truly there to enhance. The second I see a split screen photo with a woman who wasn’t too attractive and then see what the makeup did it begs me to ponder.  I begin to think ahead to later that night. What if a dude sees this woman and is interested. What if the young lady is as well? They go home, and let’s say that they cuddle or hit the skins. That next morning what does this woman look like after washing her face?

For the record I don’t think guys expect a woman to look exactly like they do in the club while they lounge around at home. But the disparity between the two looks can be huge. At that moment do you all think it was fair to that dude?

My skin can act really funny at times. When the weather is changing as it is now my face can get dry as hell. Lotion is no match! For other guys, their problem might be acne or eczema; where’s the foundation for that? Well it does obviously exist right? But makeup isn’t commonly used by men on a regular basis. What you see is what you get with us. There aren’t many things that we can use to enhance our own vanity.

The discussion I’m trying to have is to ask whether or not the abuse or misuse of makeup is right. I internalize the overuse or makeup as deceiving to many. I’m not insensitive to a variety of skin conditions. I absolutely get it. With that withstanding it doesn’t negate the feeling of “getting got” for a guy. If he ends up no longer attracted to a woman without her makeup isn’t that unfair to both parties involved?

I write this today with a boatload of curiosity. I’d love to hear all perspectives on this issue. Do you all feel me? Am I being too harsh? How do you all feel about makeup and it’s use? Holla at me.