Fabian McNally stops in this week to offer his insight on highly touted college basketball player Julius Randle. Follow him at @FabianMcNally for his insights into sports, or to roast him…whatever.

Julius Randle came into the college basketball season ranked, by many, as the 3rd best collegiate prospect behind Andrew Wiggins and Jabari Parker. Three games into his college career, he’s averaging 24 points and 14 rebounds in just 30 minutes a game, including 27 and 13 against top-ranked Michigan State in a nationally televised coming out party on November 12th.

On the heels of that performance, Randle has many wondering whether he deserves to go #1 overall, and he’s being compared to the likes of Chris Webber(!). ESPN’s Chad Ford has gone so far as to say “…Randle’s a legit contender to be the #1 pick in the draft, and if [Randle] plays every night like he did in his first two games, all 30 teams in the NBA will want to get their hands on him.” To Ford’s credit…he’s half right.  All 30 teams SHOULD want to get their hands on Randle…but under no circumstances should he be a contender for the #1 pick in the draft.

Even if he plays every night like he did in his first two games, as I suspect he will.

More important than any amount of points scored and rebounds bounded by Randle this season is the following number: 83.

83 is Randle’s wingspan, measured in inches.  Due to his relative lack of foot speed and perimeter skills, Randle projects as a Power Forward in the NBA.

Here is that same list, excluding anyone with a wingspan greater than 83 inches:

Ok then. Let’s try something else. 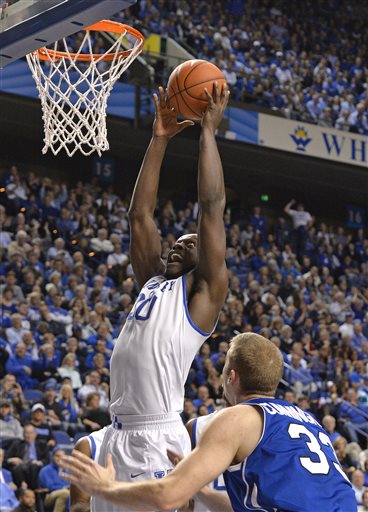 Well…if you consider Marcus and Markieff as one player, their combined 23 points and 12.7 rebounds per game are just about equal to what Kevin Love and Blake Griffin have been giving the Timberwolves and Clippers, respectively.

Now, this isn’t to say that Julius Randle won’t be good, but it should throw some water on the effort to place him on the same level as Wiggins, Parker, Exum, etc.  Jay Bilas jokes aside, wingspan is extremely important.

Randle’s wingspan is likely to affect his ability to defend, as I would argue it has with Kevin Love and Blake Griffin, both guys (with 83.25 inch wingspans) who have frustrated NBA fans with their lack of shotblocking and general defensive contributions.

His wingspan is also going to limit his offensive potential as he won’t be able to get his shot off against stronger, taller, longer, faster NBA athletes consistently. The most effective offensive Power Forwards from the All-NBA list above tend to fall into at least one of the following groups: Extremely long, freak athlete, or great shooter/perimeter skills.

The good news for Randle is that he’s young, so…he might not be done growing. The other bit of good news is that while he’s unlikely to suddenly develop into a freak athlete, he may yet figure out the shooting/perimeter skill aspect. However, I watch him bully his way to eye-popping stats against physically inferior competition that will never sniff the NBA. And while scouting report after scouting report focuses on his size, strength and imposing physicality, I can’t help but think that any team or analyst that discusses him as the potential first pick in this year’s draft has a fundamental misunderstanding of what works at the NBA level.

Draft Express proved an invaluable source on finding player measurements for this article.

tags: Julius Randle Kentucky Wildcats NBA Draft NCAA Basketball
previous 6 Reasons No One Cares That You're an Introvert
next An Open Letter to Newly Natural Women