The Booty Text: Because Who Needs to Talk Anymore? 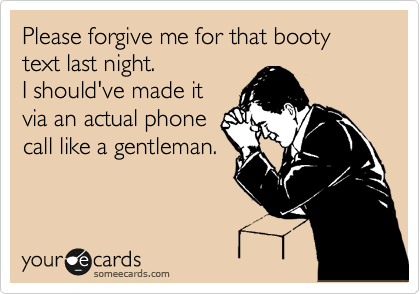 SBM hasn’t been single for a very long time, but I have my memories.

Back in the day, I called women. I would get their number, eventually set some time aside, and finally I would call them (usually multiple times). Generally at night, up to an hour for the first call. If things went well, it could continue on into the night. Then, once we were good and comfortable on the phone … we would go out.

*ring* *ring*
Ms. Wet Wet: “Hello”
Young SBM: “You still up? What you up to?”
MWW: “Nothing. Sitting here in the bed watching Flavor of Love. You?”
Young SBM: “Well, I was thinking I might come over. Give you some company.”
MWW: “Hmmmm. And do what?”
Young SBM: “IDK. Got this bottle of wine and a new dvd (pre-netflix time). Chill & talk.”
MWW: “Yeah, I guess. But we just watching a movie.”
Young SBM: “Yeah girl. Ain’t no one even in the mood for all that. It’s late.”
MWW: “Aight, well call me when you are outside.”

You know ain’t no type of movie watching took place … I was 100% in the mood.

Fast forward a few years. SBM is “matured” and married now. I’m talking to one of my friends and trading stories and talking about his inflated ego and the problems it might be causing. As I reminisce on booty calls from back “in the day”, he gets all excited waiting to talk. Then, he proceeds to tell me how much easier his life has become for our kind. He tells me about …

The evolution of the booty call

Apparently, today’s male doesn’t have time to pick up the phone and talk in order to set up a late night d**king. He merely goes down a list of women he has and uses basic text message script until he hits paydirt (soon there will be an app for that). Today’s man has deals to be closing and must use technology to his advantage.

And for the advanced user, you can even text more than one girl at the same time. And, if you are lucky enough to get 2 people to say yes, apparently you can easily ignore one of the people and claim you fell asleep or some other excuse.

But, texting has taken over more than just the late-night creep.  Now, you can get a woman’s number, get to know her, and ask her out all without actually hearing her voice.  It was a universal truth that any woman on the receiving end of the “all SMS treatment” would be mad.

Don’t get me wrong, I be texting my a$$ off. I  hate calling anyone anymore and am basically on IM, email, and text only. BUT, when it comes to relationships, calling my significant other, or dating … communicating only with text feels too impersonal.  Call me old-fashioned.

The question to you the fam: Is this a problem or evolution?

tags: booty call booty text Dating getting old sms text messaging
previous How Do Black Women Really Feel About Interracial Dating? [Video]
next How Would You React To Having A Gay Child?