Can You Really Do Better Than Your Ex? 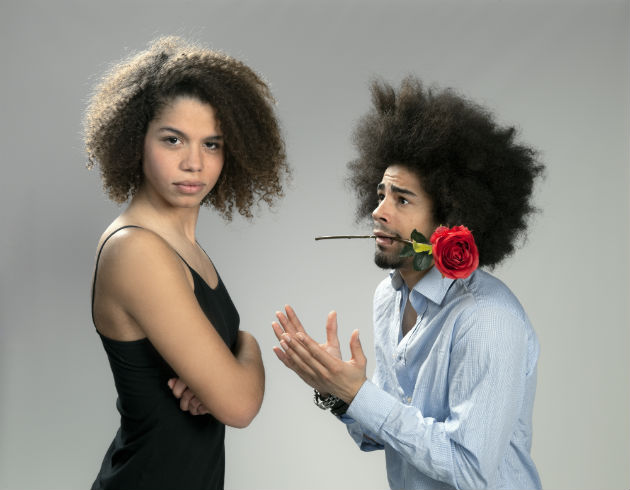 A little over a week ago I participated in a panel discussion about Love, Cheating and #Scandal. There was a great crowd and the conversation was enjoyable. I’m not going to rehash that because truth be told, y’all should have came to the event; I even posted about it on the blog. Anyway… there was one point where someone shared their reasons for staying with a cheater and it came down to this feeling that she didn’t feel she could do any better than her Ex or that she was with the person that she deserved. That made a lot of the men there sad, myself included.

But you know what? Her story really isn’t the only story like that. It happens to men too. Men stay in relationships with women that they will admit are “crazy” or “not all that smart” or “annoying” because they are literally convinced they can’t do any better. They’ll put looks over everything and anytime someone questions their decision to stay they answer… “She bad tho.” Bad meaning good, but only relegated to her aesthetically good parts.

I been there before; I’ve sat with those demons and I’ve had to deal with those thoughts and worries. Could I really ever do better than this girl who is my now Ex? When you’re just coming out of a breakup and you’re sure that you don’t have an ounce of chance to get back with that person you hit that rock bottom point. That point where you’re most likely going to try and convince yourself that you just need more time or that you’re just fine being single but in reality it’s the fear that you can’t do better than your ex that’s holding you back.

Somebody at the event last Wednesday brought this up but he really summed it up, you can never really allow yourself to think that you can’t do better. You have to have the power to think that if that last option was the very best that you could do then you probably would be with them. (Disclaimer: If you realize that that was the best option for you, then you best do your best to get back right.) However, once you’ve made that decision to move on past your last relationship, you’ve got to get the quan in your heart that you’re going to do better.

See Also:  House of Lies: An Analysis of The Multiple Lives We Lead

I felt like the best way to really write this post would be to tell it from my experience. Like real talk, all of this is true story, no let me conjure up an example to make this post sound really nice.

Nonetheless, here are three reasons why you can’t do better than your ex:

When I first broke up with one of my exes I swore up and down that it was the fact that she was still a girl and I had grown to be a man. I couldn’t hit the side of a barn when I was shooting at women at happy hour. I had my moment though, I had to realize that the reason why it ended is because I wanted to be a knucklehead in the streets in my mid-twenties instead of a boyfriend. After that I realized that I ended a good thing and never to let that happen again.

I broke up with an ex one time because our communication styles were completely different. I hated talking about stuff; and believed actions speak louder than words. While she was always bringing up every little detail for discussion, I wanted her to be more like a Chief-of-Staff and just take care it without bothering me. Even after the relationship, I still thought we broke up because she was nitpicky; that was until I realized that open communication was key to a relationship.

See Also:  Steps Before Marriage: Doing It the Right Way

You still want to get back with your ex –

I definitely wasted what was supposed to be the best years of my life thinking that I should get back with my ex. I kept thinking that every time I was dating someone new, “I really wish I could just get back with my ex.” I created this image in my head that she was perfect and that’s what the mold of any girl after her should have. That ain’t work at all. I had to get it through my hard head that she ain’t want to be with me and that I didn’t need to be wanting to be with her.

I feel right now, in my personal opinion, that my Ex-Factor is low. Let’s be honest, it doesn’t go away, it just gets to the point where it’s manageable. I credit all that progress to really being able to get from up under myself, heavy liquor, a Kanye or Drake CD and blogs that will never get published.

Here are three reasons why you can really do better than your ex:

There are few circumstances when people break up for no reason and even when that happens it is a clear sign that you didn’t have the stamina to see it through. In those dark moments when you find clarity, you also find acceptance. Part of acceptance is accepting that things are what they are and there’s nothing you can do to about that now. It just wasn’t meant to be with your ex.

As cliché as it sounds, there’s plenty of fish in the sea –

For some reason, I always break up with my girl when it’s cold. Then it’s always the coldest winter ever because there aren’t any women out on the streets. It’s like I have a tendency to pick hibernation season to want to get my jersey off the rafters. I used to lose sight quick and want to take that step back, but oh… the spring time cometh. The spring time cometh. And that’s all I got to say about that.

See Also:  Does It Take A Man To Make A Family?

The best is yet to come –

This should come as no surprise but as life goes on, you get better, circumstances get better, and that’s the way the world is supposed to work. You’ll keep growing and you know what the universe will too. It’s very likely that there is somebody out there for you that’s being groomed for greatness just like you and you’ll find them. I had to learn to get myself out of a rut and realize that I was happy because after a relationship I could be excited about the journey to find something better. In a relationship, you don’t have that excitement, you know damn well what you got.

All in all, if you lack the self-esteem or confidence to go out and do better than the last time then none of these reasons will resonate with you. Your reason for why you can’t do better is probably not even on this list. It probably sounds like a 5 year old who mumbles under their breath, “I just can’t.” For the rest of us, a setback is only motivation for a comeback. Let yourself know that you’re a winner and not a loser and that you can do better than your ex.

And when you do… don’t be an ass and post it on social media. Act like you’ve been there before.

tags: cheating and scandal get back with your ex love moving on
previous How Would You React To Having A Gay Child?
next 4 Ways to Cheat Your Way Out The Friend Zone