Championship Sunday in the NFL recently wrapped up, and we have our Super Bowl matchup. We will jump into the matchup between the Denver Broncos and Seattle Seahawks next Tuesday. Today, we’ll eulogize the San Francisco 49ers’ season.

The Niners and Seahawks were the smart pick to face each other in the NFC Championship game. They each have dynamic coaches, young, electrifying quarterbacks, tough running games, and nasty defenses. A perfect matchup on paper.

The game lived up to the hype as well. It was tight throughout, and ultimately Seattle’s defense made more plays. This includes the game-sealing interception that led to this masterpiece of a postgame interview. Never change, Richard Sherman.

The interview (and subsequent racism) aside, the 49ers place in history took centerstage in my mind.

Disclaimer to all Niner fans: I respect the hell out of your team. The defense is amazing, and Colin Kaepernick could be a Hall of Famer for all we know.

That said, what is keeping this team from becoming the 90’s Buffalo Bills…or the oughts’ Philadephia Eagles?

How do we know this team isn’t destined to be the “Best Team Never to Win it All” of this decade?

They have all the familiar symptoms:

They are starting to build the resume –

Sunday’s game marked the third straight NFC Championship game for the 49ers. You can’t be the best team never to win it without an impressive streak like that.

But it comes with a price. 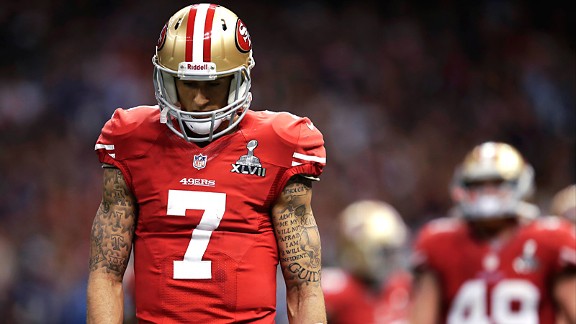 When any team, in any sport, has sustained success, their coaching staff becomes a prime target for poaching. The best compliment to any head coach is his very own coaching tree. We are starting to see that happen in San Francisco.

The Offensive Coordinator Greg Roman, Defensive Coordinator Vic Fangio and Defensive Line Coach Jim Tomsula have all drawn interest from other teams. Now that the Niners have lost, it’s at least possible the coaching exodus will begin. That puts pressure on Head Coach Jim Harbaugh and the General Manager to find the right guys to keep the success going. This has undone lots of teams before.

How do they improve? –

One of the major reasons I can see the 49ers heading down a bad path is that we have seen them at their best…and it hasn’t gotten them over the hump.

The only real improvement I can see the team making is to further develop Colin Kaepernick. He made some critical mistakes in Sunday’s game, which you can understand given his relative lack of experience.

Other than that? Where are the glaring holes on this team? I don’t see them. The team is good, young, and shows no obvious signs of slowing down…well everyone but Anquan Boldin anyway. He’s already pretty slow.

I mean, if this is the best the 49ers get, that’s pretty good. Take it from a Lions fan, you have it really good if you root for San Francisco. It’s exceedingly difficult to win a Super Bowl. There are great players who have never done it.

Maybe that will include this current group of 49ers.

What do you think? Could the Niners have already peaked? Give me your best reasons for or against a future San Francisco Super Bowl in the comments below!